The best thing about Twitter is that it forces users to embrace brevity thanks to its 140-character updates. It’s also the worst thing about Twitter, turning loquacious tweeters into Twitter stream hogs – as with the disaster that is the multi-part running commentary known as the Tweetstorm. But now Twitter is experimenting with a new feature called “retweet with comment” that would better allow users to participate in a conversation, while also providing context and commentary that can otherwise get lost when using the standard Twitter “retweet” function or “quoted tweets.”

In fact, it appears that the “retweet with comment” feature would replace the latter “quote tweet” option, which today often requires users to truncate the original tweet in order to add their own two cents. 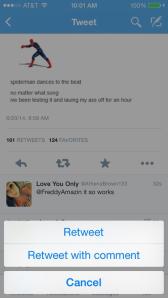 Oh, in case all this Twitter terminology has you lost:

A Twitter retweet allows a user to re-post another’s tweet to their own personal timeline. The “quote tweet” feature, meanwhile, grabs the other person’s tweet, places it in quotation marks, then allows the person re-posting it to insert their own comment in front of or after the quoted snippet.

Unfortunately, neither of these methods really allow for the sharing of a longer thought of your own because of Twitter’s hard-coded, 140-character limit in the case of quoted tweets – and because retweets don’t allow you to insert your own text.

If the current experiment rolls out to the general public, users will be able to “retweet with comment” instead of quoting a tweet which will give them more room to write their own words. 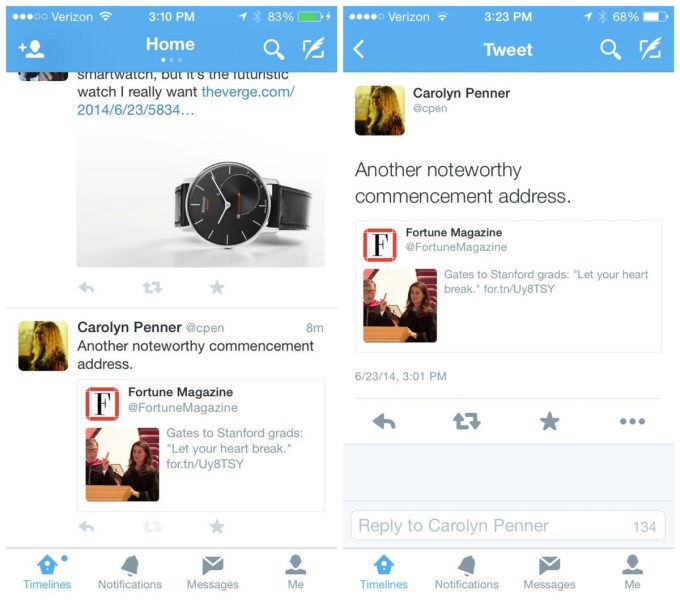 For now, Twitter is testing the change with a select portion of its user base, as it does from time to time when experimenting with how users will react to or adopt a change to its platform.

The new “retweet with comment” feature was first spotted by Mashable, which noticed that Twitter’s head of product communications, Carolyn Penner, was testing this on her own timeline.

But a quick scan of Twitter indicates that this is not some internal-only experiment. Other regular Twitter users are now seeing that the ability to quote a tweet has disappeared in favor of this new functionality. 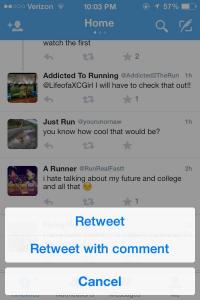 So far, however, Twitter’s peanut gallery is not amused, writing that they “fckn hate” the new feature, and telling Twitter to “stop being lame.”

Despite a handful of angry tweets, the switch is arguably an improvement over the old process, which was maddening since it almost always required you to edit the original tweet in order to have room for your own words.

Twitter has for a long time been challenged by the limitations of its 140-character nature.

For example, originally, the retweet function actually began tweets with “RT” to indicate the post was not your own, but rather something you were pointing to from another account. Still, even those couple of extra letters and the space after them were eating away at the character count, which pushed the company to move to the RT-less “retweet” feature we have today. “Quote tweet” was later thrown in as a way to humor those who actually liked to have their say, not just mindlessly re-share content.