Ever since covering Fliike, a beautifully-designed physical ‘Like’ counter for local businesses, I’ve been thinking about how the idea could be extended, with a fully-programmable, but simple, ticker-style Internet-connected display.

A few products along those lines do already exist, but I’ve yet to find anything that quite matches what I had in mind. That is, until recently, when I was introduced to LaMetric, a smart ticker being developed by UK/Ukraine Internet of Things (IoT) startup Smart Atoms.

Launching its Kickstarter crowdfunding campaign today, the LaMetric is aimed at both consumers and businesses. The idea is you may want to display alerts, notifications and other information from your online “life” via an elegant desktop or wall-mountable and glance-able display. Likewise, businesses that want an Internet-connected ticker, displaying various business information, either publicly for customers or in an office, are also a target market. 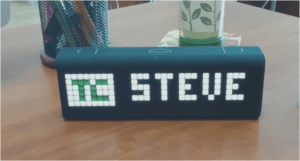 The device itself has a retro, 8-bit style desktop clock feel to it, thanks to its ‘blocky’ LED light powered display, which is part of its charm. The display can output one icon and seven numbers, and is scrollable.

But, best of all, the LaMetric is fully programmable via the accompanying app (or “hackable”) and comes with a bunch of off-the-shelf widgets, along with support for RSS and services like IFTTT, Smart Things, Wig Wag, Ninja Blocks, so you can get it talking to other smart devices or web services. Seriously, this thing goes way beyond what I had in mind — try the simulator for yourself — and, for an IoT junkie like me, is just damn cool.

Examples of the kind of things you can track with the device include time, weather, subject and time left till your next meeting, number of new emails and their subject lines, CrossFit timings and fitness goals, number of to-dos for today, stock quotes, and social network notifications. 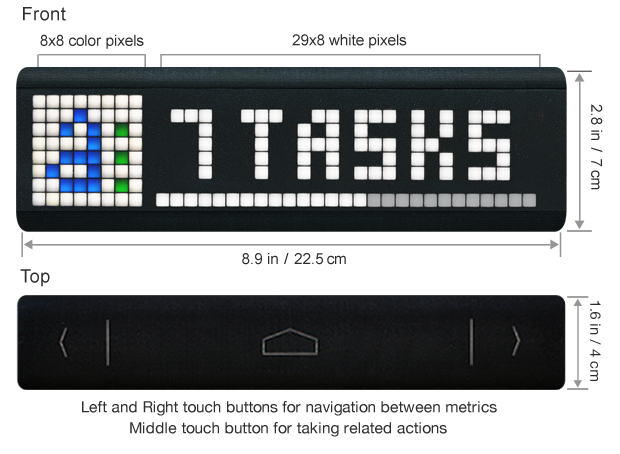 In addition to the display, the device has back and forward buttons so you can rotate widgets (though these can be set to automatically rotate), as well as an enter key for programmed responses, such as accepting a calendar invitation.

There’s also a loudspeaker for audio alerts. The LaMetric is powered by micro-USB and also comes as an optional and more expensive battery-powered version.

Early-bird backers on Kickstarter can pick up the LaMetric for as little as $89 (plus shipping) for the battery-less version, with countless other options and perks, increasing in price. Count me in.