A Facebook phone isn’t cool, you know what’s cool? An Internet of Things-styled ‘Like’ counter for local businesses who want to proudly display their Facebook page metrics. Admittedly, it doesn’t quite have the same ring to it, but the Fliike, from French startup Smiirl, not only looks cool but serves an interesting purpose by providing a bridge between a venue’s virtual presence and its physical one.

The Fliike isn’t the first product of its kind — digital signage that ties into Facebook has been offered before — but Smiirl co-founder and CEO Gauthier Nadaud says that existing offerings tend to target large companies and international brands with “very complicated and costly installations”. In contrast, Smiirl is gunning for smaller, local businesses. Tellingly, the default Fliike stops short of 100,000 ‘Likes’, though the company is open to producing customised versions. 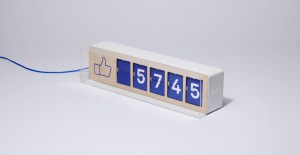 It also shuns a digital display, using a more mechanical design to increment the counter every time a company’s Facebook page gets a new fan. “Screens are everywhere, that’s why we provide a simple design using mechanical interactions, thus giving [the] Internet some tangible aspect,” says Nadaud.

Making a company’s virtual presence or digital identity tangible in the real world is one way of looking at Smiirl’s mission. More specifically the problem it’s set out to solve is that for a local business there’s no easy or cool way to physically display how popular it is on social networks and to use this ‘social proof’ as a way to drive customers in store. In the same way that people are more inclined to go to a busy-looking cafe or shop, if a business is deemed to be popular online, displaying that popularity can have a similar effect offline.

In addition, Nadaud says that it’s also “very hard to convert a satisfied in-store client into a Facebook-fan or a member of any digital community”. Seeing a business’s Facebook page ‘Like’-count on display, especially if you happen to catch it going up, is a subtle way of encouraging you to also become a fan. Who wouldn’t want to click the ‘Like’ button just to see that happen.

Going forward, the Fliike, which goes on preorder today for €300 plus taxes/delivery but appears to be throttled for now to the first 500 orders, is only the first product in the pipeline. Longer term, Smiirl says it wants to create and build an ecosystem of connected social objects designed for businesses to help them “reconnect their social identities to their physical presence”, name-checking the likes of Instagram and Spotify as other services that could be supported.

Finally, Smiirl, which is self-funded aside from its participation in French non-profit accelerator Le Camping, plans to generate revenue primarily on the margin it has selling each device, though Nadaud hints that the startup has further ideas regarding services that would build on the ecosystem its hoping to create with its connected social objects, thus generating additional and recurrent revenues.