eBay’s focus on international expansion continues: yesterday its PayPal division announced PassPort, aimed at attracting more international sales, and today eBay is announcing the acquisition of machine translation technology from a company called AppTek. From our understanding, eBay is acquiring the talent and the IP from Virginia-headquartered AppTek, but another division of its business focused on voice technology will continue on, possibly still under the AppTek name. However, those specifics are still to be determined.

Eight people from AppTek’s 10-person team will join eBay, including one co-founder. (The other will remain with AppTek to run the remaining business unit.) In the near term, eBay will continue to serve AppTek’s customers, largely government contracts, by licensing the technology.

AppTek was founded in 1990 by Mohammad Shihadah and Mudar Yaghi, and in more recent years had been developing hybrid machine translation software, which will help eBay improve upon its own in-house machine translation capabilities it began working on two years ago. 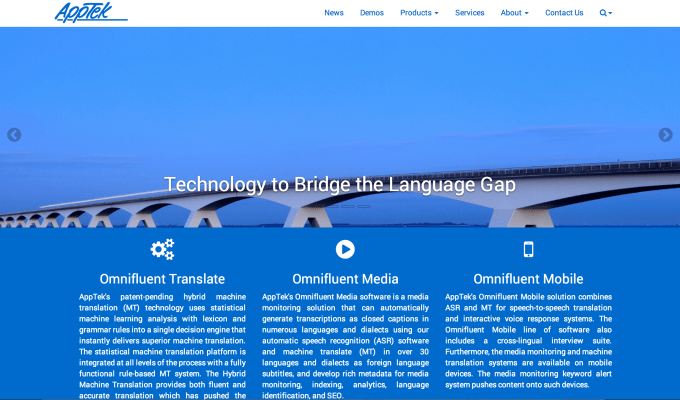 eBay says that today over 20% of its sales involve cross-border trade, and that part of its business is growing more quickly than its domestic business. That’s why it’s been building technology to help buyers and sellers better communicate.

Currently, eBay is translating listing details, including parts of the item description, in places like Russia, Brazil, Mexico, and in some European countries. Originally, the company had experimented with using third-party translation tools for this task (like Google’s), but found that they were not as accurate for eBay’s specific, commerce-related needs, which often involve translating descriptions that aren’t written with proper grammar, or in complete sentences.

So instead, eBay has been developing its own translation tools that can identify things that are more likely to appear on a marketplace like theirs, where there’s no inventory catalog to refer to. Its translation software today understands things like colors, brands, and the different product domains (electronics, fashion, etc.) where a product fits.

For eBay, this acquisition was about three main things, the company tells us. One, AppTek had a number of the world’s experts in hyper machine translation technology, and had offices in Aachen, Germany, where nearby universities were leaders in this field. In addition, explains Marc Delingat, Senior Director of Product and Technology for Geographic Expansion and Cross Border Trade at eBay, AppTek also has a lot of code and components that eBay can use, and they have a lot language data.

Plus, adds, Wendy Jones, Head of Global Dxpansion and Cross Border Trade at eBay, even if eBay didn’t acquire a technology maker like AppTek, they would have to build that technology for themselves. “We decided to look at companies like AppTek that were out there and would help us accelerate our plans…we went on a pretty exhaustive search,” she says. Though the company had never experimented with AppTek’s technology before, it was familiar with the company as a member of Marc’s team knew people there.

In the near-term, the acquisition means eBay will be able to more rapidly roll out more translation capabilities on its site, with plans to do so for Europe later this year, Jones says.

Longer-term, the company wants to offer more services for buyers and sellers, including a listing service that would help sellers list in multiple languages, instead of turning to third-parties for help. eBay’s also planning to develop instant messaging-like communication tools between buyers and sellers that would translate between languages in real time.