Spotsetter, a social search engine using big data to offer personalized recommendations as to places to go, has been quietly snapped up by Apple, TechCrunch has learned. The technology, which involves layering social data on top of a maps interface could be used to beef up Apple Maps with features competitor Google lacks.

The deal, we understand, was mainly about acquiring the technology and the talent of the two founders, ex-Google Maps engineer Stephen Tse and Johnny Lee (whose LinkedIn profiles also now point to their move to Apple).

Some of the company’s team also joined Apple, but not all.

Spotsetter debuted during AngelPad’s Spring 2012 class, then later went on to raise $1.3 million in seed funding from Rahul Prakash, 2020 Ventures, Javelin Venture Partners in addition to AngelPad, according to CrunchBase. We don’t know the specifics of the deal terms at this time, but hear that the “investors are happy,” so to speak.

Spotsetter looked to combine friends’ recommendations, trusted reviews and other signals in order to reinvent maps as a more social experience.

Initially available as a web and mobile application, Spotsetter used a patent-pending algorithm to pull in users’ content from social networks like Facebook, Twitter, Instagram and Foursquare, as well as venue content from over 30 review sites and lists from trusted sources like Yelp, Zagat, the New York Times, Michelin, and TripAdviser. As of last summer, the company said that it had processed 5 million user profiles, 40 million venues, and 1 million curated venue content items from around the world. 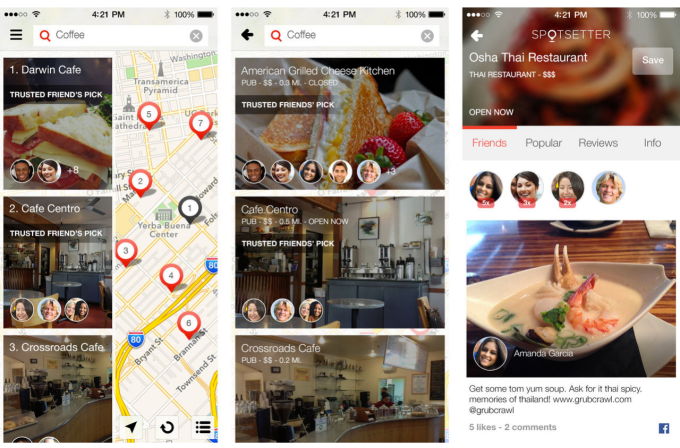 Using the app, you could look up any place, category or keyword, then be presented with personalized results, as well as see what your friends had said about the places around you. The app would also highlight which of your friends were experts in a given area, like coffee or shopping or sushi, for example – and you could tag your friends as experts in order to influence the recommendations. In addition, you could use Spotsetter to discover new places by browsing the map to see where your friends have been and what they’ve shared.

The end result was a social search engine built on top of a mapping interface.

As VentureBeat pointed out in its review last year, Spotsetter was similar in a way to Foursquare, which also plots social data on a map, but instead of being limited to one source, the app pulled from multiple platforms. 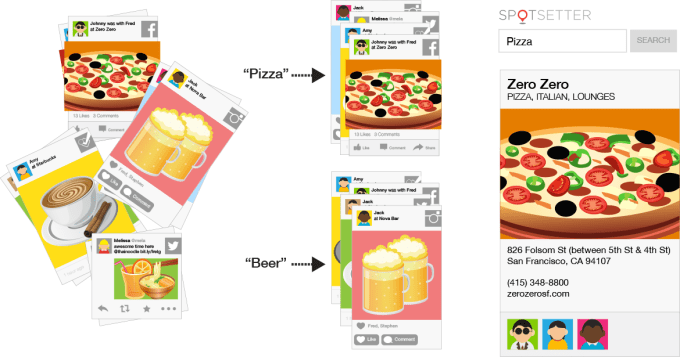 Spotsetter was available, until recently, on both iOS and Android, but the company had its eye on making its way into wearables in the future, including Google Glass, and maybe the rumored iWatch, if such a product were ever released. As the company explained on its blog just a few months ago, recommendations done right on wearable platforms would seemingly work “like magic.”

“Our users won’t have to explicitly search; they get a great recommendation at the appropriate time with the right amount of content,” wrote Lee. “Then they continue to enjoy the physical world without a thought about technology.”

Lee’s final blog post from last week hints that though Spotsetter is shutting down, the idea lives on:

“We still have big dreams for personalized search for places and look forward to seeing great progress in this area.”

Spotsetter had been in discussions with Apple for some time, but the deal quickly closed last week after other companies found out and became interested, we hear.

We’ve reached out to Apple for comment, and will update if a response is provided.