Editor’s note: Dr. Kiki Sanford is a science communications expert with a PhD emphasis in Neurophysiology from UC Davis. She is the creator, producer and host of the popular and irreverent weekly “TWIS” (“This Week in Science”) podcast and radio show, and host of “Smart App Moms.” Sanford is also a subject-matter-expert advisor to Signal Media Project, a nonprofit organization that promotes and facilitates the accurate portrayal of science, technology and history in popular media.

Warning: Spoiler alerts. Proceed at your own risk.

There are plenty of reviews available for those of you looking for advice on whether or not the new military sci-fi flick “Edge of Tomorrow” is worth seeing in theaters. This is not one of those reviews.

My purpose in screening the film — and in getting an inside perspective from the film’s director, Doug Liman — was to peer into the depths of the fictional reality created for your entertainment, and consider its scientific merits. That said, I love a good action film, and this movie did not disappoint — it was filled with powered armor battle suits, aliens, fast-paced battle scenes, and it was in 3D. If this stuff is for you, then so is this movie.

The story is an adaptation of a short Japanese military sci-fi novel by Hiroshi Sakurazaka, called “All You Need is Kill,” and centers around Major William Cage (played by Tom Cruise), a military public relations official who finds himself stripped of his rank and thrown in with the new recruits on the front line of a massive assault against octopus-like aliens, called Mimics, that have invaded Earth.

Luck on his side, he manages to kill an alien. However, he dies in the process. The upshot is that the dying alien bleeds all over him, which dooms him to repeating the day over and over again in a Groundhog Day-esque time loop.

We find out that one other soldier on the battlefield, Rita Vrataski (played by Emily Blunt), has experienced a similar time loop, which allowed her to learn more about the Mimics they are fighting, and to win a battle at Verdun. She becomes Cage’s mentor as they both work to discover the location of the Mimics’ control center, the Omega alien, so that they can destroy it.

All right, that’s the basic story. So what about the science?

The first and most obvious place to start is with the technology. We are led to believe with media clips about the alien invasion that events are taking place in the not too far off future. Communication technology like phones and television are very similar to, if not the same as, the tech we use now.

Military technology is always a bit ahead of the curve compared to what the average consumer can access, but in the film there is some really neat tech — like powered battle armor and quadcopter troop transporters — that is definitely still some time away from becoming reality.

However, Liman, explaining how rapidly military tech evolves during wartime, told me: “We looked at what DARPA [Defense Advance Research Projects Agency] is currently building and envisioned if we were five years into a war, and everything else just stopped, and the best minds in the world and the manufacturing prowess focused on building these suits of armor, where would we be in five years.”

The battle suits themselves are entirely believable, and I think it comes from the approach used by Liman and his team in designing them. According to Liman, they used current DARPA designs as a starting point, but necessarily had to make changes to take use and movement into account.

“We really started from a function-versus-form point of view,” he said. “I wanted to start with how would it actually work. And, in this case, what enemy are you fighting, and what piece of equipment would you build to fight that enemy? And I wanted to build something that actually functioned. And that’s the big difference, because in every other movie that’s had a suit of armor like this, it’s been computer-generated. The level of sophistication that went into designing these suits was unlike anything that I’ve been exposed to in movie-making or in real life, and they’re made up of hundreds of parts that all work together.”

Battery life was also a critical concern. Liman suggested that in the movie, world battery technology has taken a major step forward to enable these battle suits to operate without being plugged in, but “as futuristic as “Edge of Tomorrow” is, it’s not unintentional that Emily Blunt steals Tom Cruise’s battery the first time they meet on the battlefield; we’re always going to be looking at our battery meter and wishing we had more juice.”

Interestingly, Liman said his suits were functional enough that he wanted to power one up, but ran out of time. Personally, I hope he gets to this item on his to-do list because I’d love to write the story about the Hollywood director eclipsing DARPA in battle-armor development. 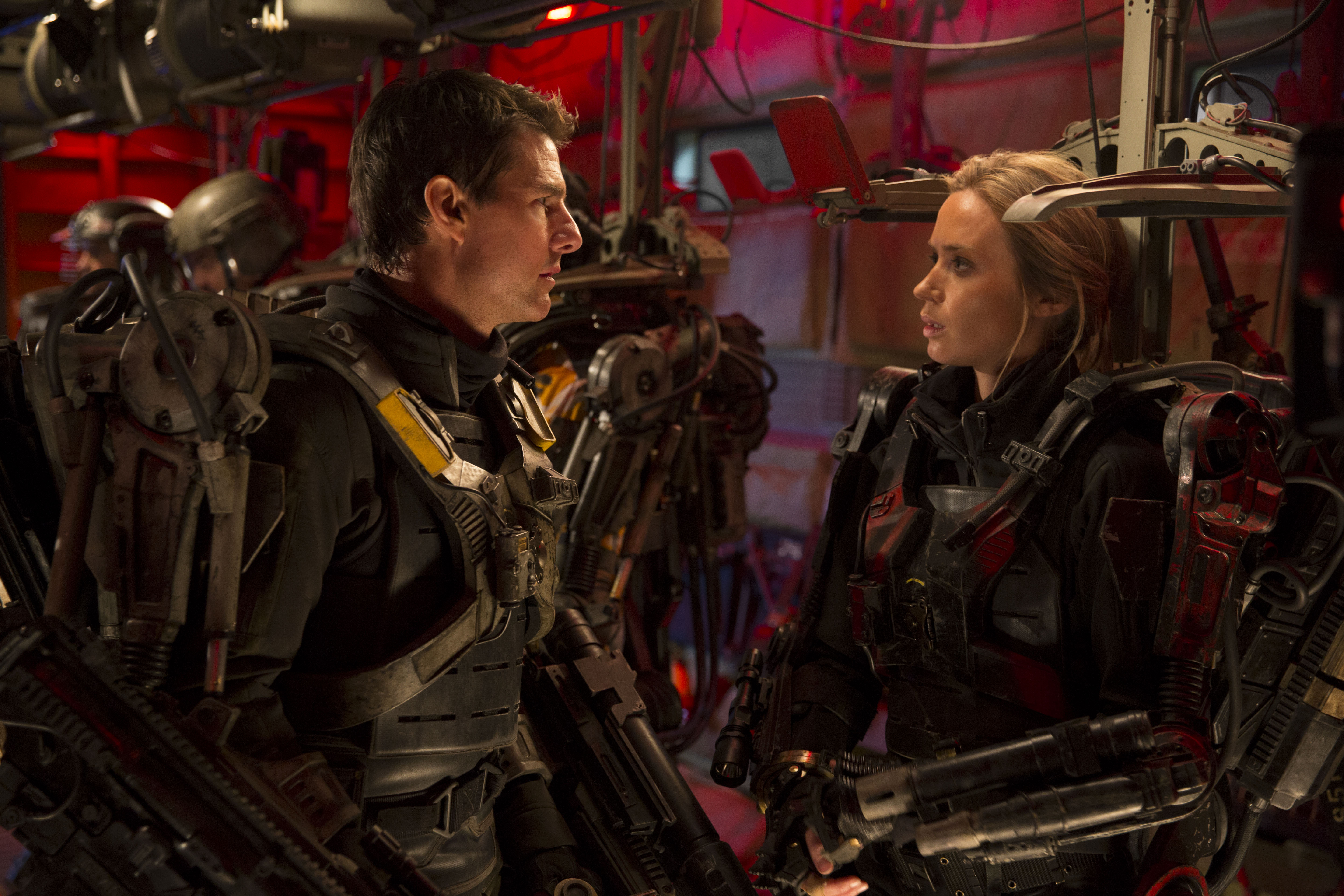 The Mimics themselves are completely unlike mankind in morphology (body structure) and behavior. Yet, their apparent social structure derives from a theme any science fiction or insect-lover will find familiar: the hive mind or collective consciousness.

Other movies with characters belonging to species having similar behavioral abilities include the Kaiju of “Pacific Rim,” the Eywa in “Avatar,” and the Bugs in “Starship Troopers” (from television, you probably recall Borg from “Star Trek” and Cybermen from “Dr. Who”). In all of these films, the different species are able to communicate in a way that allows the whole of the species to know what an individual knows. Sometimes the information passes through a central processor organism, while in others there is more distributed processing through some kind of network.

The interesting twist for the aliens in this story is that they have also either evolved a biological ability or developed technology that allows them to send messages backwards in time in order to warn themselves of potential threats to their survival. This is what Major Cage taps into when he inadvertently gets covered in alien blood. There is something in the blood of certain Mimics, the Alphas, that connects to the leading Omega allowing information transfer about experiences between individuals and through time.

This is a big universe where we can’t even begin to fathom the kinds of selection pressures potentially at work on life-supporting exoplanets.

But in the film, he added, “we understand the end result of what they’re doing. And one of the things they’re doing is they’re predicting everything — our every move — and they are doing it because they have some way of manipulating time to repeat the same day to go back in time. To send a message to themselves. And for me, specifically, what’s happening is they aren’t winding the clock back. They are just sending a message back to themselves 24 hours in the past, so they can warn themselves about something that is about to happen.”

I’m going to guess this ability could result from one of two possibilities: either nanotechnology resonating on a specific frequency or quantum entanglement at the cellular level. Who knows how that could evolve, but this is a big universe where we can’t even begin to fathom the kinds of selection pressures potentially at work on life-supporting exoplanets.

In reality, according to our current understanding of physics, time loops could exist due to a theoretical quantum mechanical principle called nonlocality. Researchers like John G. Cramer at the University of Washington think nonlocality is possible and are working to provide experimental proof. If experiments work out, we probably won’t be able to send messages back in time, but we might see instantaneous communications from Earth to Mars enabling real-time rover control using virtual reality interfaces.

I emailed Cramer to ask about the possible physics of the fictional situation:

Standard quantum mechanics is ‘linear,’ a mathematical property that describes how quantum states are superimposed. There are proofs in the physics literature that if one could find a situation in which quantum mechanics was slightly non-linear, then the door would be opened to nonlocal communication, which would include back-in-time communication… I would think that this would be your best bet. Let the alien’s blood contain nanomachines that make quantum mechanics nonlinear, so that the rest of the scenario could proceed.

Another explanation for the time-loop phenomenon is that rather than being a loop, each experience is taking place in an alternative parallel reality. We see them sequentially for the sake of the story, but the individual receiving the message perceives all potential outcomes at once, and is able to proceed down the path with the best survival benefit. For the Mimics, that would mean the Omega, receiving information from the experiences of all its Alphas, would tell the population as a whole what steps to take to win this battle for Earth. For Major Cage, it means that he knows how to bring the story to its action-filled climax.

I’m not even going to comment on the science of human physiology and resilience. Humans are capable of amazing feats of strength and endurance, and action movies have been asking us for years to believe that their heroes are able to withstand great physical trauma in order to win the day.

This film is no different. So, Cruise’s character falls from a great height, landing and tumbling in such a way that he should have been a broken puppet, only to continue running and fighting strong as ever. Whatever. Suspend disbelief, and enjoy the action.