This is an excerpt from Ryan Holiday’s new book Conspiracy: Peter Thiel, Hulk Hogan, Gawker, and the Anatomy of Intrigue, available now.

Peter Thiel’s vague idea to do something about Gawker, the site that had outed him as gay in 2007, was concretized into conspiracy on April 6, 2011. It began unremarkably, when Thiel traveled to Germany to speak at a conference and had dinner with a student he’d met on a tour of a university a few years before. Peter arrives, driven in a black S-class Mercedes, the same model he has idling outside with a driver, twenty-four hours a day, seven days a week, wherever he is in the world. From the hotel emerges a short, fit young man of indiscernible origin. Aside from his Ivy League education, the young man has at this point achieved next to nothing. But Peter attracts these types — mostly men early in their potentially ascendant careers — and puts them to good use: investing in them, giving them advice, placing them in start-ups, assigning them important roles in his operations. This specific young man in Berlin, we shall refer to as Mr. A, the pseudonym that almost everyone involved in the conspiracy refers to him by. 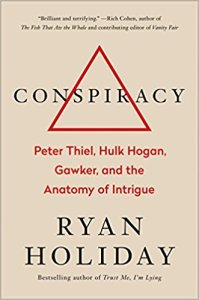 Mr. A is not just young but also ambitious, ambitious in a way that makes observers slightly uncomfortable, that makes him stand out even amongst the cadre of upstarts in Peter’s orbit. It’s not fame he wants, or money either, or even to create the next big tech company. He read Machiavelli at thirteen. He’s fascinated by power and knows that Peter is a means by which he can wield it.

There is a scene in the movie The Assassination of Jesse James by the Coward Robert Ford. At the beginning, in the woods, Robert Ford, played by Casey Affleck, illustrates this phenomenon. He thinks the outlaw Jesse James is a great man. He thinks that he, himself, is a great man, too. He wants someone to recognize that in him. He wants someone to give him an opportunity—a project through which he can prove his worth. It just happens that Frank James would size the young man up in the woods outside Blue Cut, Missouri: “You don’t have the ingredients, son.”

In contrast, Mr. A is ambitious, but it’s paired with self-confidence, social adeptness, and a clear sense of what Thiel wanted. Even so, the prospect of meeting with Thiel is intimidating: his stomach churning, every nerve and synapse alive and howling. He’s twenty-six years old. He’s sitting down for a one-on-one evening with a man worth, by 2011, some $1.5 billion and who owns a significant chunk of the biggest social network in the world, on whose board of directors he also sits. Even if Thiel were just an ordinary investor, dinner with him would make anyone nervous. One quickly finds that this is a man notoriously averse to small talk, or what a friend once deemed “casual bar talk.” Even the most perfunctory comment to Thiel can elicit long, deep pauses of consideration in response — so long you wonder if you’ve said something monumentally stupid. The tiny assumptions that grease the wheels of conversation find no quarter with Thiel. There is no chatting with Peter about the weather or about politics in general. It’s got to be: “I’ve been studying opening moves in chess, and I think king’s pawn might be the best one.” Or, “What do you think of the bubble in higher education?” And then you have to be prepared to talk about it at the expert level for hours on end. You can’t talk about television or music or pop culture because the person you’re sitting across from doesn’t care about these things and he couldn’t pretend to be familiar with them if he wanted to.

They are seated to dinner at Restaurant Tim Raue promptly at 8:00 p.m. A reservation has been called ahead, a good table secured, in a restaurant that has hosted Obama, Merkel, and other world leaders. This was Berlin, not far from Checkpoint Charlie, but it could have been New York, Los Angeles, London, Brussels, Tokyo. It’s quiet, filled with the kind of global elites who need to know that wherever you are in the world you get your two-Michelin-star-quality sautéed brussels sprouts and pork belly. Feigning confidence, Mr. A glances at the menu and orders the eight-course tasting menu. Peter beckons the sommelier over to order wine. He asks what kind of wine Mr. A likes. Hearing Riesling, he makes his request: “We’ll have a bottle of this one.” It’s the second most expensive Riesling on the menu.

The butterflies settle. The conversation has wound itself down naturally and now there is nothing left but for Mr. A to seize the moment. This moment that few get. The chance for a pitch that can change your life. There is something popular with ambitious people called the “briefcase technique.” You don’t show up to a meeting with a few vague ideas, you have a full-fledged plan that you take out of your proverbial briefcase and hand to the person you are pitching. Even if nothing comes of this plan, the person on the other side is knocked over by your effort, so impressed by the unexpected certainty that they cannot help but see your usefulness to them. Mr. A unlocks that gurative briefcase on the table: “Okay, I know what you think about Gawker, here’s what I am proposing…”

Thiel had spoken about Gawker many times. He had spoken about it in interviews, he had complained about it to friends. It had come up in passing in conversation when Mr. A and Thiel had first met a few years before. Now sitting at this table in the city that birthed a thousand Cold War plots and counterplots, he finds that first successful return of those many trial balloons. Ambition and opportunity have collided and the kid in front of him is proposing a solution to that problem that Thiel has set upon trying to solve: Peter should create a shell company to hire former investigative reporters and lawyers to find causes of action against Gawker. Gawker has written thousands of articles about thousands of people; it must have made a mistake somewhere. Mr. A’s proposal is more than just an idea, it’s a comprehensive, structured plan: he has researched some names, he had a timeline and a budget.

Three to five years and $10 million.

Peter replies with one of his customary pauses. The silence hangs there, one second, two seconds, ten seconds, and like so many others before, Mr. A wonders if this suggestion is crazy, if he has blown his chance. And then Peter begins to talk, interrupts himself as he does, as if he still needs time to decide his own thoughts, and  then repeats the words he has been told by so many others, so many times—that there was nothing that could be done. Has Peter come to believe this? Is he testing the young man before him?

Here is where the ambition and naïveté of youth are so powerful. Mr. A responded with words that would be almost absurd for someone of his age, someone who in fact knew little about the world except from what he had read and learned in school. Except he was right and the words he spoke were the type a man like Thiel could not resist.

“Peter, if everyone thought that way, what would the world look like?”

“Just hearing that was so refreshing,” Peter would tell me when I interviewed him. “Because of course what you always heard was these incremental things that wouldn’t quite do it.” Yet Gawker is hardly a pressing issue in 2011. Valleywag, the site that had written about Peter, has been temporarily shuttered. Mr. A is then in the position of convincing the healthy man how bad it is to be sick. He picks a seductive angle for Thiel then. He isn’t talking about defense—not simply righting a wrong that had been done to him, or insulating his own business against someone with a grudge—but something that feels more noble and inspiring than that. It is more than the servant whispering to Darius, “Master, remember the Athenians.”

Peter, think about all the people they’ve hurt. It’s going to keep happening.

It’s only going to get worse.

If you—the billionaire—can’t do anything about it, who can?

And what would follow would be Thiel’s attempt to prove that conventional wisdom wrong. It would take another nearly five years, cost above the projected $10 million, and in the end involve the FBI, the Tampa Bay Police Department, the 1st and 4th Amendments, the wrestler Hulk Hogan, the alt-right, Gamergate, a $140 million dollar verdict in a Florida courtroom and, eventually, the President of the United States of America.

It’s an insane, nearly unbelievable story. Not a conspiracy theorybut an actual conspiracy.

One we’re only just beginning to understand.