My highest score on Dots — the original Dots — is 414. I achieved this respectable, albeit relatively average, score about a year ago, just after Dots was first released. When I open up the app now, I never play for more than a few tries. I can never get anywhere close to 400. I can’t even get close to 300.

Which brings me to Two Dots, the latest generation of the betaworks-backed game that came out Thursday.

Talking it over with our own Josh Constine, he called it a “skinned version of Candy Crush” and he isn’t far off. Rather than focus on a scoreboard style of game, Two Dots offers a levels-based game, meaning that you never get stuck trying to beat a high score (though you may eventually get stuck on a level).

The Dots franchise ran into this “impenetrable ceiling” problem (I just made that up, roll with it) long ago, which is why the company released various game modes within the original Dots. Alongside the 60-second speed trial, where in you connect as many of the same-colored dots as possible, Dots also offered “Endless” (with no time limit), “Challenges” (letting you go head to head with your friends), and “Moves.” 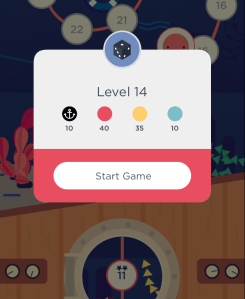 “Moves” is by far the most similar game mode to the new Two Dots game, where users are given a certain amount of moves with which to complete a number of goals. When you achieve all your puzzle goals in far fewer moves than you were given, you get three stars for that level, along with a numeric score.

The same general principle of simply connecting same-colored dots still applies, and making a square still removes all dots of that color left on the board. However, with each new world come a new set of challenges that are totally unrelated to the original Dots.

TwoDots introduces two characters, Amelia and Jacques, who travel from level to level with you accumulating rewards for every win. It’s cute, I guess, and gives the user something to attach itself to while traveling through the game. Remember, Two Dots was created to attract more long-lasting gamers. Only about a quarter of the original 20 million Dots downloads are still active.

That said, I could probably do without the characters. They’re slightly random, especially coming from the clean white slate of the original Dots, and the only reason I know their names is because I read through the press kit. I also have a bit of a problem with the color of the Dots, as purple and burgundy are quite similar and thus frustrating.

Still, the Dots team has some of the best game designers I know of, including Patrick Moberg and David Hohusen, and that shines through in Two Dots. It’s still a beautiful app, simply far less minimalist than the previous generation.

In the first world, all seems familiar. Squares are better than not, but the same mechanics from Dots are still very present. There are blockades, and oddly shaped boards, but all is as it should be. The second world is different.

The mission of the second world is to sink anchors which drop down into the board. In order to do this successfully in the required amount of moves, you have to learn a pretty difficult new skill, which is to “create a bomb.” An explanation of how to do this isn’t clear in the app, at least without digging for it, but you essentially have to create a square of same-colored dots around a different colored dot.

This creates a bomb, which takes out random dots nearby, Minesweeper-style.

Now, I’ll be the first to admit that I’m not an amazing gamer. I did ok at Dots, have enjoyed Bejeweled Blitz, Temple Run, Angry Birds… All the big casual games, I played casually. For me, Two Dots is a bit too difficult to enjoy casually. If you absolutely get stuck on a level and can’t figure out the new auto-power-up move, you lose a life. Lose five lives, you can’t play until your lives “regenerate” (which happens each twenty minutes).

And just to reel you back in once you’ve had enough, Two Dots sends push notifications telling you about your new lives.

In other words, unlike Dots, you essentially have to pay for power-ups or extra moves to continue trying if, like me, you fail repeatedly. You also lose a life just for restarting or quitting a level. Boo.

The app is currently the top free app in 40 countries, including the U.S., and crossed the 1 million download mark in 36 hours. The app is also currently featured in the App Store as Best New Game. (Android fans, your version of the app is coming soon.)

For me, and some of the folks at TechCrunch that I’ve talked to, Two Dots is a bit too frustrating to be casual.

The original Dots was frustrating in its own way, as beating your high score seem to sometimes just come down to luck, until you realized practice kind of does make perfect. So even though it was hard to progress, it was still a simple time sink that you practiced at, mindlessly.

Two Dots, constantly bringing new challenges into play, is anything but mindless. But maybe people who are less familiar with the original Dots, and come at it with a fresh perspective, will find it a bit easier. Or maybe I just haven’t played enough Candy Crush.