Heather Joyce and Erin Matzkin, hard-working technology attorneys who also happen to be moms with a total of five kids between them, spent many years helping companies build websites and apps, but were frustrated that there was not a decent application that addressed their own needs when it came to balancing their work and family lives. So they decided to build one themselves. Today, they’re introducing “CluckCluck,” a simple utility that lets you communicate with your nanny or sitters, assign task lists, share emergency contacts, and pay caregivers directly from your phone.

Longtime friends, the two founders had practiced law together at the same firm, and later at the Walt Disney Company, getting married, having kids, and having long discussions about balancing work and family life over the years. The idea for CluckCluck eventually emerged from their shared struggles on that latter point, with everything coming to a head one day when Joyce became frustrated with trying to book a sitter by sending out text after text. “Why isn’t there an app for this?” she thought.

Because of their tech law backgrounds, Joyce and Matzkin knew how to draw out the basic wireframes for what they had in mind. They then brought in Damian Toohey, an aerospace engineer, creator of personal finance app Budget Boss and father of three, to help them build CluckCluck. 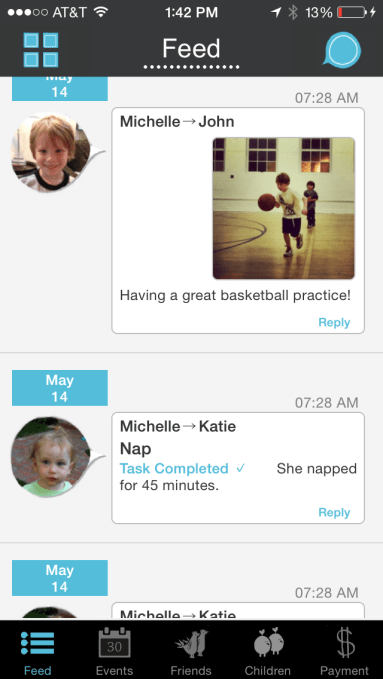 The app, whose name is meant to reference the “mother hen” concept, competes to some extent with the offerings from services like Care.com, UrbanSitter, or SitterCity, or perhaps a family organizer like Cozi. But unlike the sitter-finding services, CluckCluck’s premise is not that you need help finding a caregiver, but that you need a simple way to find out which of your usual sitters are available.

With CluckCluck, parents can input their list of favorite sitters, then send out an invitation to all their sitters at once when a job is available, as well as use the app to communicate with the sitter about what their kids are up to while in the sitter’s care.

Instead of having a note stuck on the fridge, parents can also share their contact info and other emergency numbers with the sitter using the app. Plus, they can create profiles for each child detailing the activities and other tasks they want to be updated about, like the child’s soccer practice or other after-school program, their homework assignments, nap or feeding times and more. Caregivers can respond to these assigned tasks with just a push of a button, or they can optionally include a text message or photo.

Explains Matzkin, this helps to eliminate some of the awkwardness around the communication process. “The task list frees the nanny up from having to type out a long text message…but it also makes the nanny confident that she’s not being intrusive, because you’ve asked to get this information,” she says.

This feature, however, puts CluckCluck more in competition with something like Care.com’s “Karoo” app, which is largely designed for caregiver and parent communications. However, Karoo is more focused on sharing photos and various milestones rather than actual tasks. (In fact, before building CluckCluck, the founders tried Karoo themselves, hoping it would meet their needs. It did not.) 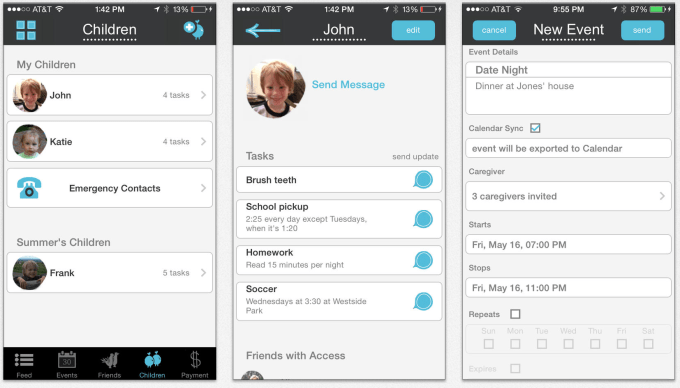 Finally, CluckCluck lets parents pay the sitter directly from the phone using PayPal, which is handy since hitting up the ATM tends to cut into those precious hours of freedom. This also provides a source of revenue, as each transaction includes a 99-cent convenience fee. At the end of the year, you can even export your transaction history to Excel to help with your taxes.

Though still an early beta and in need of some visual polish, CluckCluck is the kind of app that’s clearly been designed based on these women’s real-world experience in trying to balance their parenting duties and ambitious careers. And they took it from idea to launch without being iOS developers themselves. They even won the Audience’s Choice award at TechCrunch’s Atlanta Meetup and pitch-off this year.

The app is a $2.99 download here on the iTunes App Store. A “gifting” function is built in, so you can purchase it for your nanny or sitter as a way to get them signed up.