Fresh off the heels of another massive $200 million funding round which values the company at $5 billion, Pinterest is preparing to announce a new initiative that will allow businesses to gain a better understanding of Pinterest trends, as well as an enhancement to its API platform which will aid with those insights, TechCrunch learned and Pinterest has confirmed. The API will inform businesses which products are most popular, which types of images work best, which Pins are driving the most sales, and more.

Explains Pinterest, though the company will continue to offer its own free Pinterest Analytics product, it knows that some companies choose to use third-party marketing tools to help them figure out how their business is performing on other platforms. By offering this “Insights” data via API, Pinterest is making it easier for those businesses to engage with consumers on Pinterest, as they’ll be able to see which of their pins are really driving traffic, and which are being re-shared (or, in Pinterest lingo, re-pinned).

Businesses would then be able to customize their own Pinterest activity accordingly, including their marketing campaigns.

For now, the only way for an interested business to access this data via an API is through one of the above-mentioned marketing technology partners, who are the first to have access, as members of a pilot program.

Several of these companies have already built new products and services on top of the developer API, and they will also now be rolling these out to their own customers. The companies will only be able to access public Pinner activity, to be clear. Meanwhile, Pinterest is encouraging the companies to add their own additional insights and features, like conversion tracking, which Pinterest itself doesn’t currently offer.

One example from Piqora (see below) is the company’s new “Pinterest Trends” product, which allows Pinterest marketers to gain category-level insights into a brand’s performance on the site, as well as how they stack up against competitors. 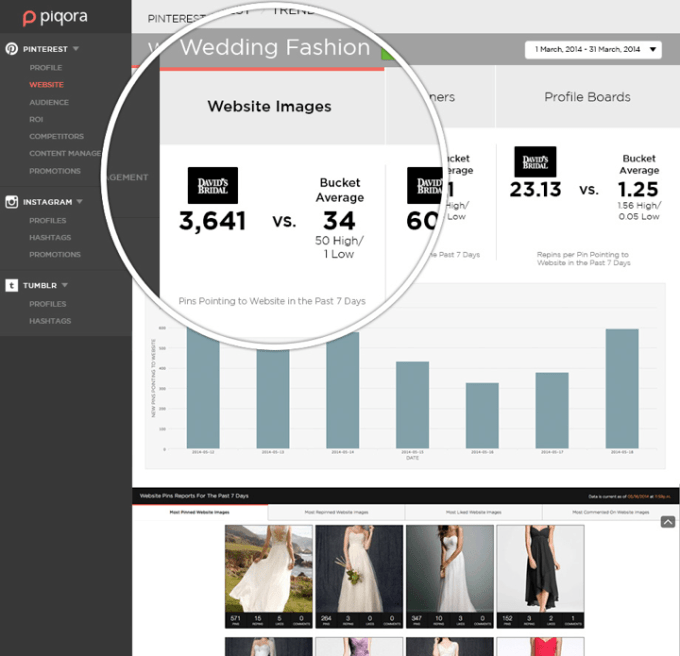 Pinterest has been busy in recent weeks working to crank up its efforts at turning the addictive visual bookmarking site into a revenue-generating business. The company launched its first paid Promoted Pins earlier this month, which are shown to users in both the search and category feeds on web and mobile.

The new API is tied into this larger vision, because a business marketing itself and its products across Pinterest would also want to know which search terms or category feeds it would want its ads to appear in, so it could create the appropriate content and title it correctly. And in turn, it would want to know what specific terms its potential customers are looking for, and which of their pins in which categories are being repinned and clicked on the most.

Pinterest says that the API is not being opened up to additional developers at this time, but those wishing to track this development further can sign up for weekly newsletters to hear more or contact the marketing technology companies directly.