Telenav has made a large investment in the crowdsourced OpenStreetMap (OSM) project and currently employs the project’s founder Steve Coast. With the help of this, the company hopes to take on Google’s mapping services for both mainstream users and developers.

Telenav’s involvement has given the OSM project quite a boost, and so it’s not a major surprise that the company also today announced that its flagship Scout turn-by-turn navigation app is switching to OSM as the main source for its mapping data. As part of this rollout, the company is also rebranding the Skobbler navigation app it acquired earlier this year under the Scout brand, which now gives it a footprint on over 50 Android app stores, as well. Scout for Android will switch to OSM in June. 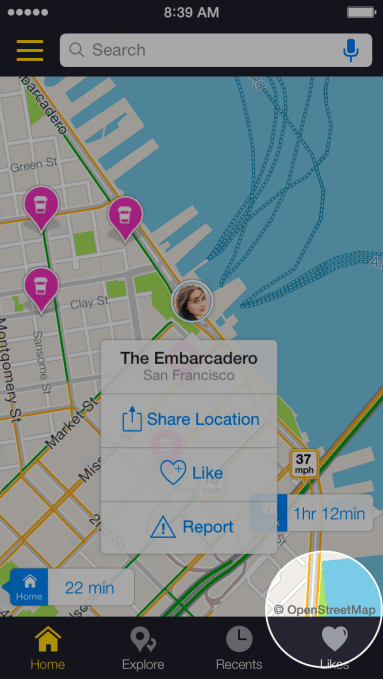 What’s maybe even more interesting than Scout switching to OSM is that Telenav is also launching a new mapping and navigation SDK based on OSM today. The standout feature here is that the SDK allows developers to write apps that can use offline maps. This makes it perfect for travel apps that a user can download before a trip and then use internationally without needing a (costly) international data plan.

The first company to integrate this new SDK in its products is Strava, which will use it in its cycling and running apps.

Because it is using OSM’s data and doesn’t have to pay license fees for this information, Telenav is also able to offer its developer service for about half the price of the Google Maps API. According to Telenav’s Ryan Peterson, who was deeply involved in developing the SDK, the other reasons the team is able to compete on price is that the company is using a proprietary system to keep its data format very lightweight so it doesn’t have to move a lot of data between the client and its servers.

“Combining offline and online navigation with all the inherent advantages of OSM and with unparalleled map customization options results in happy developers who can now offer map-based services exactly how they want them with minimal effort – across iOS and Android,” said Philipp Kandal, managing director of the new Scout for Developers program in a canned statement today.

As OSM founder Steve Coast told me in an interview earlier this week, he believes that the OSM data can now compete with proprietary maps in most areas. He admitted that OSM falls short in two areas: navigation information like one-way streets and restricted turns, and geo-coded address data.

Developers who use the SDK can skin the maps in any way they want and put their own branding on them. They can also choose routing options for pedestrians and bikers.

To fix the navigation data issue, a team of about 25 people at Telenav has been looking at the GPS traces the company received from Scout users over the last three years and analyzed it. This has helped the company to determine what the likely speed limits in many areas are, for example, and if all cars just travel in a single direction on a given street or just make right turns, chances are this is indeed a one-way street or a restricted turn.

To get geo-coded addresses, though, the company had to rely on third-party data. Nobody enjoys putting street addresses into web forms, Coast noted, so it’s hard to crowdsource this kind of data.

All of this clearly sets Telenav up to compete head-to-head with Google and other mapping vendors for developers. Coast was pretty open about this ambition. “We want to take the data and expertise — especially with the SDK — and start selling to other places and replace Google in more contexts.”

Google, of course, is a formidable competitor in this space. It has already become the de facto mapping and routing solution for many users and when it comes to mapping data, its fleet of Street View cars has automated many of the data gathering activities that OSM’s user community has to perform by hand. In the cloud computing market, Google has also shown that it is always willing to compete on price, so if Telenav started taking too much market share from it, chances are Google will just reduce its prices.