Riding what has been a tumultuous wave for publicly-traded technology stocks, today the cloud-based help desk business Zendesk debuted on the New York Stock Exchange. Setting its pricing at $9 per share yesterday, the stock opened up 27% higher at $11.40 on its first trade — a modest rise and by no means a bust. Things got even more positive as the day went on: it rose steadily throughout Thursday, and at market close market close it was at nearly 49% above its opening price, at $13.65 per share.

That puts Zendesk’s current market cap at something between $940 million and $955 million. 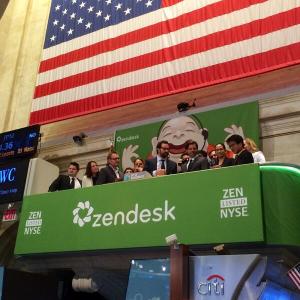 At $9 per share for the 11,111,111 shares Zendesk was offering, this was squarely in the middle of the $8 to $10 range the company most recently projected.

Zendesk raised just short of $100 million — although that was some $50 million short of the amount originally planned for when it first filed for its IPO around a month ago. The $9/share price values Zendesk at around $632 million.

Zendesk, originally founded in Denmark but now based in San Francisco, is tapping into a couple of bigger trends at the moment.

The first is the general surge in enterprise startups over the last year or so, in the wake of several years of focus on consumer plays.

And the second is the big shift to cloud services, tapping into the growth of better data networks and mobile devices with less storage, as a way to deliver them more efficiently.

But while cloud-based businesses have been one of the biggest growth engines in enterprise technology, they have been doing so on a much thinner margin base than their larger, legacy competitors.

Zendesk had a net loss in 2013 of $22.6 million, down by some $2 million from the year before, while its net loss for Q1 2014 nearly doubled to $10.3 million. It looks like, for now, Zendesk will be taking a similar approach to growth by not focusing on positive net income. “We intend to invest aggressively to drive continued growth and market leadership,” the company noted in its S-1. That has included making its first acquisition, of Singapore-based live chat help provider Zopim, for just under $30 million.

Worth noting that Zendesk is not alone here, and in some ways is in healthier position if you are tracking revenues versus losses. Box, which has filed for a $250 million IPO, says that its 2013 revenues were $124 million but with net losses of $168 million. Some have floated the idea that Box will delay its IPO although the company has not confirmed those reports.
Images: Zendesk, Scott Beale