Looks like Andreessen Horowitz sees a big opportunity in A/B testing — the venture firm is leading a $57 million Series B round of funding in Optimizely.

Andreessen partner Scott Weiss (co-founder and former CEO of Cisco-acquired security company IronPort) is joining the Optimizely board of directors.

Founded in 2010 by Dan Siroker and Pete Koomen, and incubated at Y Combinator, Optimizely aims to make it easy for website owners to test different variations of their design and content. (Siroker was director of analytics for Barack Obama’s presidential campaign in 2008.) Last month at Opticon, its first customer conference, the company launched a version of its platform that supports iOS apps.

Optimizely says it now has more than 7,000 customers who have created more than half a million experiments, making it the most widely used testing platform. (The company sent me the BuiltWith chart below showing adoption among Alexa top 10,000 websites.) The company also says it has passed “a milestone of seven billion web experiences optimized.” 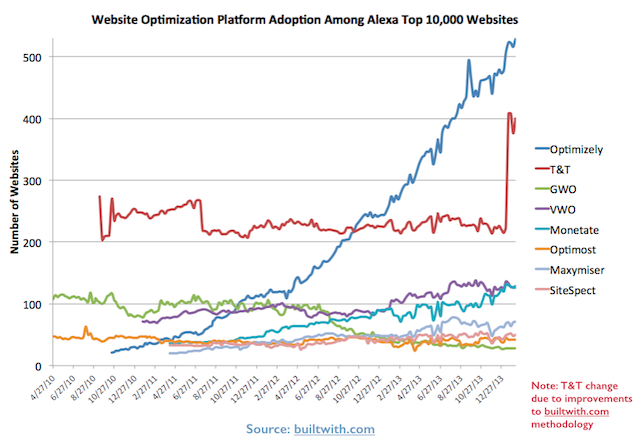 Another sign of its ubiquity: The fact that any new player in the testing market (or at least the ones I talk to) feels obligated to mention Optimizely.

Siroker has said in the past that his vision is to build a platform allowing any website to deliver a personalized experience to visitors. In a new blog post, he said that bringing Weiss onto the board will help him deal with the challenges of growing the company:

I’ll be the first to admit that I don’t know what I don’t know. I certainly didn’t anticipate the challenges we faced at 50, 100, and 150 employees and I’m sure I won’t be able to anticipate the challenges ahead. Our culture will have to adapt and scale as the company grows. Many companies fail at this stage because they grow recklessly without being thoughtful about culture, organizational design, and alignment around a focused set of goals. That is why we need a partner who has been there, done that.

Optimizely announced its Series A just over a year ago, and says it has now raised a total of $88 million. Previous investors Benchmark Capital and Bain Capital Ventures also participated in the Series B.