Kabbage made waves last month when it closed a $270 million credit facility to pass on to small businesses that use its online platform to borrow working capital and extend credit lines. This month, it’s the turn of Kabbage itself: the company has raised another $50 million in a Series D round of equity financing.

Rob Frohwein, Kabbage’s CEO and co-founder, says the money will be used in a few ways. First, to build out its own business — new marketing efforts and partnerships to target SMBs better; and building up its international business, specifically in the UK, Canada and Asia.

And second, to fuel what he refers to, colorfully, as Kabbage’s “data reactor, technology that harnesses data energy.”

“We don’t believe in data exhaust; it connotes pollution, a byproduct of a more efficient process.  You might as well call it data excrement,” Frohwein says (he has a way with words; am I right?). “We have built a platform that harnesses the value derived from data creation and assimilation, enabling our customers to benefit in a way that was previously unimaginable.”

By this, he means continuing to build out Kabbage’s big data platform, which assesses different aspects of an applicant’s financial and online sales history to help determine a credit rating, how much Kabbage will loan, and how it will be repaid. The visualisation of it is a little like this: 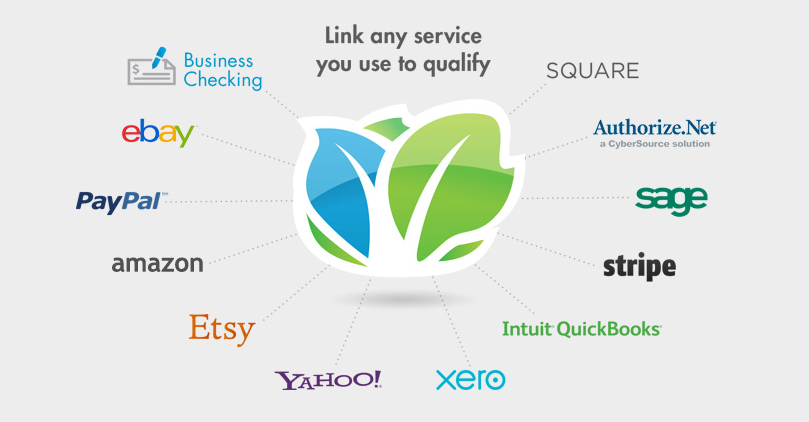 Frohwein would not comment specifically on the valuation of his company. But when I asked him if it was comparable to Lending Club’s — another big player in this space that has been on a financing tear to fuel growth — he corrected my estimation of the latter company’s valuation. “I think LC is at $3.8B. :)” he wrote in an email.

Make of that what you will. What is clear is that these lofty numbers — just yesterday, peer-to-peer site Prosper announced a $70 million round at what appears to be a $600 million valuation — are bringing up questions of IPOs or other exit routes in the M&A direction.

“Lots of interest in the space so I think all alternatives are open to us,” Frohwein says.

Kabbage, to pun on the more traditional meaning of its name — has been in a rush of growth since first opening for business in 2011. Targeting online merchants first, and then extending out to all kinds of small businesses, Atlanta-based Kabbage has now lended some $250 million, mostly in the U.S., which it claims makes it bigger than any traditional bank or anyone else working in the business of loans to smaller companies. Kabbage forecasts that its business will grow three-fold again in this year alone.

The company’s “data reactor” appears to be the key to how Kabbage has stood out among others in the space, as far as investors (and perhaps performance, too) are concerned.

“Kabbage is using data and technology in a highly innovative way to transform the entire small business financing sector,” said Steve Murray, Partner at SoftBank Capital in a statement. “It is the kind of game-changing opportunity in which SoftBank likes to invest. Kabbage’s powerful underwriting platform which has been so successful here in the US has massive global potential.”

Not only does that platform give Kabbage the advantage of more data for assessing a loan, but it produces results in minutes — a major milestone considering the time it takes a traditional bank to process a loan application. That’s also perhaps one of the reasons why Kabbage is now working on partnerships directly with more traditional banks. (Banks have the traditional customer contacts and local presence; Kabbage has the platform to serve them.)

“Ninety-nine percent of our transactions happen without any human interaction,” Frohwein tells me as further elaboration on how Kabbage does things differently.

“Components of our competitors’ products are automated, but none are completely automated. From a product standpoint, we’re the only company that offers a line of credit. This is critical because most small businesses require ongoing access to credit, not just a one time push of cash. Further, from a technology perspective credit lines are much more complicated to manage and require continuous underwriting, not to mention persistent connectivity to relevant data sources.  Our ultimate goal is to create what we call a ‘fingerprint product’ that allows us to specifically tailor a product to the needs of the customer based on the data that we’re seeing.”

Frohwein says that the last few weeks since announcing that $270 million credit line have been “flawless” in terms of transition. Some $50 million of that capital has already been deployed. The bank line of credit that it now offers in addition to cash advances is being done through a partnership with Celtic Bank.

Internationally, apart from the U.S. and UK where it is already active, the plan is to launch in Canada in the next few months as well to tap into Asia — unsurprising, given the new SoftBank connection.

“Obviously many international markets pose not only regulatory hurdles but also technology challenges,” Frohwein says. “We tend to focus on markets where there’s a strong technology infrastructure for small businesses and where data is meaningfully available electronically.”