Facebook’s is getting more and more mobile, now with 1.01 billion users on small screens. It’s Q1 2014 earnings show it beat expectations, earning $2.5 billion in revenue with an $0.34 EPS. It now has 1.28 billion total monthly users, 802 million daily users, and 609 million daily mobile users. Facebook continued its march to become a mobile ad company with 59% of ad revenue coming from portable devices. Wall Street had expected $2.36 billion in revenue and earnings of 24 cents per share.

Total ad revenue hit $2.27 billion, up 82% from a year ago. Payments revenue including games and apps reached $237 million this quarter, down slightly from $241 million during the holiday Q4. GAAP costs and expenses reached $1.43 billion, up 32% YOY, driven by headcount and infrastructure expenses. Capital expenditures reached $363 million in Q1 2014.

One other news item is that Facebook CFO David Ebersman is stepping down June 1st and will be replaced by the company’s vice president of corporate finance and business David Wehner. Ebersman plans to return to the healthcare industry after he transitions out in September. 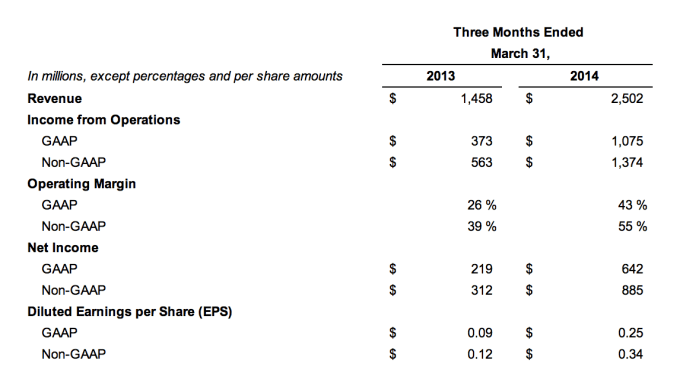 For a sign of how far Facebook has come on mobile year-over-year, monthly mobile users are up 34% to 1.01 billion now, daily mobile users is up 43%, and mobile as a share of total ad revenue is up from just 30%. It also now has 341 million monthly mobile-only users, up from 296 million in Q4 and 189 million a year ago. Many worried Facebook wouldn’t figure out how to monetize mobile as its users shifted there in mass, dragging down its IPO. But the company has proved the pessimists wrong by turning mobile app install ads into a cash cow. 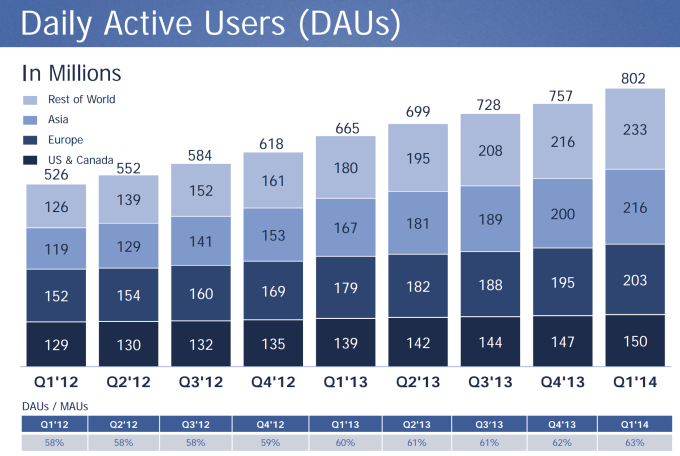 Another big focus of the day will be on whether Facebook shares any data on teen usage. The company reported a slight drop in engagement amongst young teens in the US during its Q3 2013 earnings and its share price plummeted. Last quarter, it punted on the issue, saying “in terms of teens we don’t have any new data to report” which combined with high performance in mobile ads to boost the share price 13% the next day.

We’ll be covering the earnings call live at 2pm PST, so stay tuned to our Facebook earnings page.

Below you can see charts tracking Facebook’s financial and user growth, including this quarter: