Another mobile milestone for Facebook: the company reported in its Q1 earnings that it has now passed the 1 billion mark for monthly active users on phones and tablets. 1.01 billion to be exact. That is a sign of how mobile is approaching near-parity with desktop for Facebook: overall MAUs across both desktop and mobile totalled 1.28 billion.

That’s without Instagram users or those on Facebook Messenger, which in themselves are each now at over 200 million monthly users (Instagram was announced a month ago), the company pointed out during its earnings call.

Nor does it include WhatsApp users, nor what CEO Mark Zuckerberg referred to on the earnings call as “the third step” in its mobile strategy — a reference to its Creative Labs effort and apps like Paper “and other things that we might announce at some point,” he said. “It might take a few years” for usage of these to reach meaningful proportions compared to Facebook and the other, more established apps.”

Interestingly, mobile-only users nearly doubled over a year ago and now stand at 341 million. Were Facebook to consolidate WhatsApp usage, and that of Instagram, with its wider mobile numbers, that figure would presumably shoot up to over 800 million, with WhatsApp making a timely announcement, just a day before its new owner’s quarterly earnings, that it has reached a milestone of 500,000 “regular, active users of WhatsApp.” 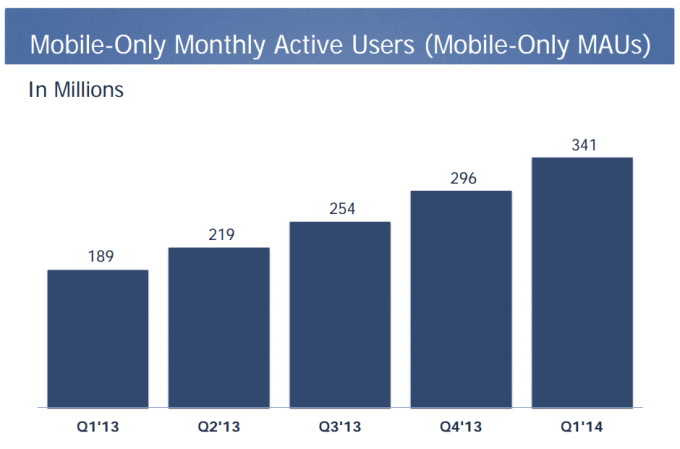 “We’ve grown fastest in countries like Brazil, India, Mexico, and Russia, and our users are also sharing more than 700 million photos and 100 million videos every single day,” WhatsApp noted in the blog post announcing the news.

The news that Facebook has passed 1 billion users, rising 34% in a year, is on one hand a mark of a relentless trend for the company — more and more people are accessing the social network on phones and tablets than on desktop computers, a trend that is only growing as Facebook pushes into more developing markets where handsets are often a user’s primary link to the Internet.

On the other hand, hitting 1 billion is a vindication of sorts: Facebook in the last quarter announced that it would fork out $19 billion on mobile messaging service WhatsApp to help it push deeper into connecting with and growing its mobile user base, and specifically into the kinds of markets where WhatsApp does well, emerging and fast-growing economies. Facebook is, in some regards, betting the house on mobile.

While we have yet to see how Facebook eventually decides to monetise its WhatsApp userbase, one area where it is already reaping some big rewards is in advertising on its existing products, specifically its Facebook itself.

Mobile ads continue to be a powerhouse for the company. They are now at 59% of all ad sales, equivalent to $1.4 billion. A year ago they made up 30% of all ad revenues. Facebook is expected to be announcing a mobile ad network at its F8 developer conference at the end of this month, and in the earnings call today COO Sheryl Sandberg confirmed “early testing” of such a network. (Note: it’s not the first time we’ve heard that one but apparently this may really, really be coming out now.)

Interestingly, it sounds like whatever future plans Facebook has for driving more mobile ads, it will not necessarily factor Instagram into the equation in a massive way, at least for now. “Instagram is a great advertising product because there are tons of demand and pictures are visually appealing. We have seen some great results,” Sandberg noted during the call, using a campaign from Levi’s with pictures of denim in outdoor space, as a sign of things to come. But that’s not at the expense of continuing to scale up the user base. “We don’t see the need or urge to ramp this,” she said in reference to adds. “We want to grow it slowly and deliberately.”

One thing that stood out during the earnings call, in terms of Facebook’s mobile future, is that whatever those levers will be for growth, it sounds like they will continue to remain native experiences. “There’s nothing wrong with HTML5… but both Apple and Google have made it easier to provide good experiences on their own platform,” Zuckerberg. “A large number of people access people from the mobile web so we are continuing to develop that but for the foreseeable future we will continue… to work on the native app experiences we have now.”

And the more established native app experiences are continuing to develop. Despite the WhatsApp acquisition, we may see more from Facebook’s pre-existing, in-house efforts, for example. “We have a lot more coming to Messenger in the first half of this year,” Zuckerberg noted a quarter ago — before the WhatsApp tsunami. No surprise, considering Messenger’s growth. It’s added about 150 million users in the last 15 months.

Indeed, Facebook’s been pushing Messenger much more aggressively of late. In November 2013 Facebook began shortcutting users from its main apps into Messenger if they had the standalone chat app installed, and if you chatted with someone who wasn’t using Messenger, you were given a link to invite that person to do so. Eventually, the plan appears to be to strip out chat from the main app to drive much more downloads of Messenger.