Seriously, people. The Internet is officially freaking out about an odd image spotted on Apple Maps, which some are claiming is “proof” of the Loch Ness monster’s existence. By “some,” of course, I mean amateur Loch Ness Monster enthusiasts, whose Fan Club founder Gary Campbell has been talking to press about the now-viral image, which his organization has been studying for months.

“It looks like a boat wake, but the boat is missing. You can see some boats moored at the shore, but there isn’t one here. We’ve shown it to boat experts and they don’t know what it is,” Campbell told one news outlet (ahem, tabloid) in the U.K.

The satellite image, discovered in Apple’s mapping program, shows what appears to be a sizable ripple in the water, similar to a boat wake.

And it is a boat wake, as it turns out.

But like those Rorschach ink blot tests, I guess you see what you want to see. 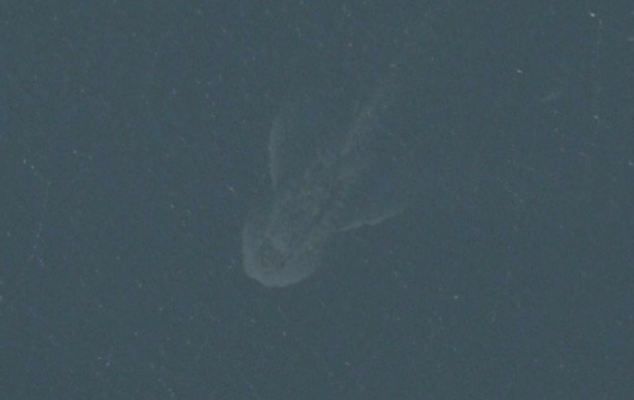 But wait! How can there be a boat wake with no boat? Well, as a number of articles have since pointed out, objects – like boats – going missing from the satellite maps’ imagery is actually a common occurrence, and a result of how the computer programs stitch together overlapping images to form a coherent picture of the world below. Sometimes this causes issues when the stitching algorithms go awry.

After far too many news organizations picked up this story – because, hey slow weekend! hey, pageviews! (cough, cough) – some sites even went so far as to debunk the story with photos of the actual boat in question from earlier satellite images.

So again: that’s a boat, not a giant 100-foot-long massive catfish with huge flippers.

Apple, who we also apologized to on behalf of the web, did not respond to a request for comment.