Etsy announced a new channel for its online crafts marketplace last year, with the launch of Etsy Wholesale. The service, which allows sellers to connect with qualified retailers around the U.S. and elsewhere, is now nearly ready to exit from beta testing, the company says today, with a public launch set for later this summer. More importantly, Etsy is now announcing the pricing for this forthcoming service, with one-time sign up fees of $100, followed by 3.5 percent transaction fees for wholesale purchase orders.

This is the same transaction fee percentage associated with Etsy listings, it should be noted.

For background, Etsy’s marketplace features handcrafted items and more from sellers ranging from individuals who craft as a hobby to those who make their art a full-time business. With Etsy Wholesale, the goal is to appeal to the segment of the Etsy user base looking to better scale their operations in order to build their own sustainable businesses.

From an economic impact survey Etsy did last year, the company knows that 18 percent of Etsy sellers in the U.S. are running their creative businesses full time, and a sizable number rely on Etsy sales for supplemental income. It also learned that 74 percent of U.S. sellers consider their Etsy shops “businesses,” no matter the size of their shop or how long they’ve been selling, while 91 percent aspire to grow their sales in the future.

Using Etsy Wholesale, sellers have the opportunity to extend their brands to larger retailers, including Nordstrom, West Elm and Indigo, as well as to tradeshows like Capsule, American Craft Council and the forthcoming National Stationery Show, the company says. To date, hundreds of retailers joined the beta, including also indie boutiques like Michele Varian in New York, Walker Art Center Shop (a museum store), MADE (Jackson Hole, Wyo.), and Foxglove Market (Saint Paul, Minn.). 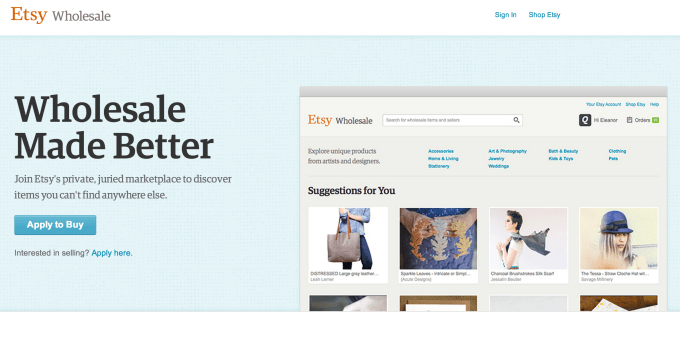 Since its beta debut in April 2013, “hundreds” of sellers have been using Etsy Wholesale service, but the company declined to share cumulative sales data with us at this time. Etsy estimates that the service will generally cater to a relatively small percent of its overall user base, which now numbers over 1 million sellers worldwide.

However, while Etsy understands that not every seller is a candidate for Etsy Wholesale, those who are using the service have generally been on Etsy over twice as long as average active sellers. For them, going wholesale is the next logical step in growing their business.

Etsy is also teasing that there’s more in store, as Etsy Wholesale prepares to publicly debut in August, with a launch event “catering to the industry’s top lifestyle and home boutiques, new retail partnerships and marketing campaigns,” notes the official announcement.

Correction: The $100 fee is a one-time joining fee, not per year.