I’m a big fan of the consumerization of the enterprise, which is seeing a host of startups crop up and build apps for the corporate world that take a consumer approach in terms of design, simplicity, social-esque features and a single-use focus. One product that falls squarely into this camp is the team management app Weekdone.

Late last year the Estonian startup released a very well-recieved native app for iOS, adding to its existing desktop and mobile web-friendly versions, but an Android app was notable by its omission. That’s now been rectified with the release of a dedicated Weekdone client for Google’s mobile OS.

Backed by Ahti Heinla, founding engineer of Skype, and former investors and executives of leading Russian social network Odnoklassniki, and founded by the same team behind Talentag, Weekdone taps into the PPP — Plans, Progress, Problems — principle to enable managers to keep a pulse on their teams by streamlining the feedback loop and presenting the results in a highly visual and aggregated ‘dashboard’ view. 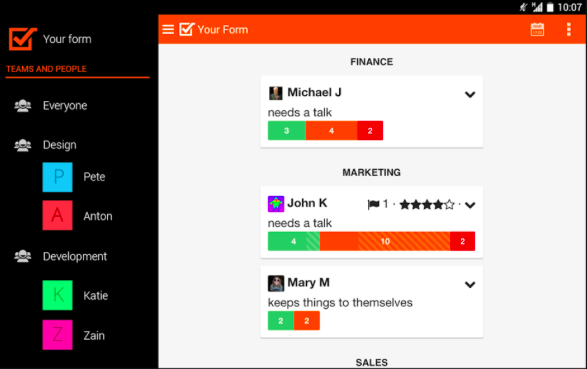 Through the app, team members are asked to list their key plans and what they want to accomplish. Then, as the week progresses, employees mark stuff done, automatically moving items from Plans to Progress, as well as reporting ‘soft’ indicators such as rating their work happiness. There’s a messaging component, too — another attempt at moving more communication outside of email — in which team members can answer questions posed by their manager, such as suggestions on how they can improve or what needs to get done.

Finally, at the end of each week, the app compiles an automatic visual dashboard and textual report of what’s been achieved since the last update, and what’s planned for the following week, which is sent to managers and team members via email, PDF or accessible on the web, iOS and Android versions of Weekdone.

“The managers quickly see calculated indicators like team happiness, task completion ratio, overdue items count or problems, and can drill down into each section and person,” co-founder Jüri Kaljundi told me back in October.

Although it shares much of the same design aesthetics as the iOS and web versions, the Weekdone Android app has some aspects specific to the platform. These include Google+ authentication to enable easy sign up and importing of contacts, making it quicker to invite colleagues to the app. In addition, I’m told that the app’s designers have tried to stay true to native elements of Google’s OS. In other words, this isn’t just a straightforward port.

In a plethora of other updates to Weekdone, the app has added support for Basecamp task importing, meaning that if you use Basecamp for your company or team’s project management, you can now automatically important tasks into Weekdone to keep your manager in the loop. This joins existing support for Asana and Atlassian JIRA.