Salesforce unveiled plans for a new, 61-story Salesforce Tower at 415 Mission Street in San Francisco to expand its worldwide headquarters, and as part of that it’s filed an 8-K form with the SEC with the details of how much it will be investing to do so.

The CRM giant will pay $560 million over a period of 15 years starting 2018 to lease space, with an additional $130 million on top of that for for leasehold improvements, amounting to a total of outlay of $690 million.

Salesforce’s move is also an interesting development considering the ongoing debates about tech workers who live in San Francisco and are accused of putting a strain on the residential market, some of whom do not work in the city itself — resulting in a string of protests around the busses that they use for their commutes. One suggested solution has been to ramp up high-density housing (read: skyscrapers, not unlike the Salesforce Tower), which has its own drawbacks.

Although there have been some notable tech company migrations into San Francisco over the last couple of years, including Twitter developing its HQ, and Pinterest moving in 2012, you can see where a company like Salesforce might be attracted by the idea of expanding outside the city into more flexible commercial real estate, something that Mayor Ed Lee seems to allude to in his statement on the new building and Salesforce investment:

“Salesforce.com is a tremendous partner to our City and our residents, bringing thousands of new jobs to San Francisco and solidifying the Transbay District as a leading destination for innovative companies,” he said in a statement. “I want to thank Marc Benioff and Salesforce.com for their commitment to start here, stay here and grow here in San Francisco.” 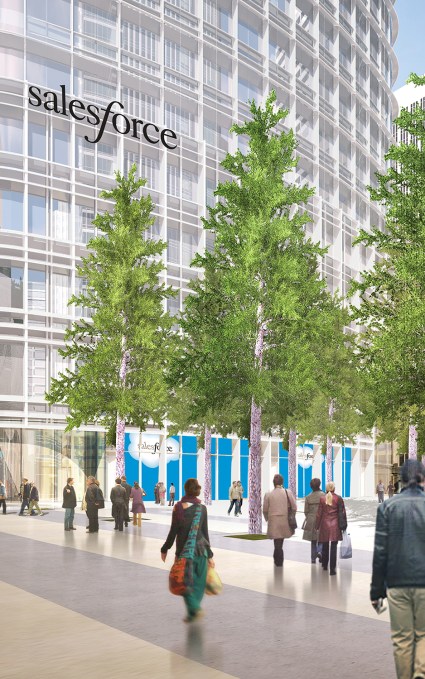 Salesforce says it will be taking over half of the 1.4 million square feet available in the building, which being developed by Boston Properties and Hines. Salesforce Tower is being built above the new Transbay Transit Center and will be adjacent to salesforce.com’s current offices at 50 Fremont St. and 350 Mission St. in San Francisco.

“Salesforce Tower represents an incredible milestone in our company’s history—it will be the heart of our global headquarters in San Francisco,” said Marc Benioff, chairman and CEO, salesforce.com, in a statement. “We founded salesforce.com in San Francisco 15 years ago and this expansion of our urban campus represents our commitment to growing in the city.”

The expansion will mean that Salesforce’s SF campus will collectively span some 2 million square feet by 2017.

As a point of comparison, Apple is building a new campus and HQ in Cupertino that will be 2.8 million square feet at an reported cost of $5 billion.