The Nokia Lumia 930 will be the company’s new Windows Phone flagship smartphone outside the U.S. this summer — although, by that time, the mobile making division of Nokia will be owned by Microsoft. That acquisition, recently delayed slightly,  is due to complete “within weeks”, Nokia said today at a dual press briefing with Microsoft to cover off its forthcoming trio of Lumia devices and the updates arriving with Windows 8.1.

TechCrunch got hands on with the flagship Lumia 930 at the briefing in London this morning. Read on for our first impressions.

The 2.2GHz quad-core Lumia 930, announced yesterday at Microsoft’s Build conference, is basically the rest-of-world version of the Lumia Icon Verizon exclusive, which launched in the U.S. back in February. The 930 will come with the Windows Phone 8.1 update out of the box, though — so it’s not launching til late June or early July in the U.K.

The launch delay for the Lumia 930 — which is still another three to four months out — is down to waiting for that Windows 8.1 update, Nokia said today (although the more mid-range Lumia 630 and 635, also announced yesterday, will be out a bit sooner, towards the end of May).

It is also, it conceded, down to its “launch campaign plan” — ergo, the pair want to make sure all those joint Nokia-Microsoft marketing pounds do they job they’re intended to. The joint marketing campaign for the 930 will be “one of the biggest ever”, they said today.

U.K. pricing has not been announced as yet (Microsoft out a $599 price-tag on the phone yesterday), but Nokia is describing it as its new flagship Lumia so expect a premium price.

Although it’s clearly a high end handset, the phone has the more standard 20MP Carl Zeiss lens on the back, rather than the 41MP PureView beast found on the Lumia 1020. Clearly that bigger but bulkier PureView lens is going to remain siloed in the Lumia portfolio for the foreseeable future, as a specialist bit of kit for photography enthusiasts, rather than a technology that gets pushed across all high end Lumias.

Nokia said today it intends to particularly promote the Qi wireless charging aspect of the Lumia 930 — describing the technology, which has been associated with the flagship end of the range since 2012, as “an important asset for us” —  by bundling a free wireless charger in the box with the Lumia 930, and offering a second wireless charger to consumers who pre-order the 930, as part of the marketing push.

Whether that’s enough to get consumers genuinely attached to a technology that requires an awful lot of addition gizmos littering the place to provide incremental convenience remains to be seen.

U.K. buyers of the 930 will also get a wireless speaker as part of the bundle, plus a £20 app voucher to get them into the habit of tapping into the Windows store.

The Lumia 930 has an aluminum unibody design, giving it a solid, premium feel, softened by a plastic rump that comes in a range of vivid colours — including bright orange and the bright green variant pictured below (the green is considerably brighter than it appears in the photo).

There are more muted colour options available too (such as white and black) for those who prefer not to add a high-via jacket to their handset.

The overall size of the Lumia 930 is pleasing, with a generous but not ridiculous 5-inch display, and blunt metal sides that are nice and easy to grip. The weight in the hand is not notably hefty — a problem Nokia had with early flagships, but which it’s since managed to kick into touch. 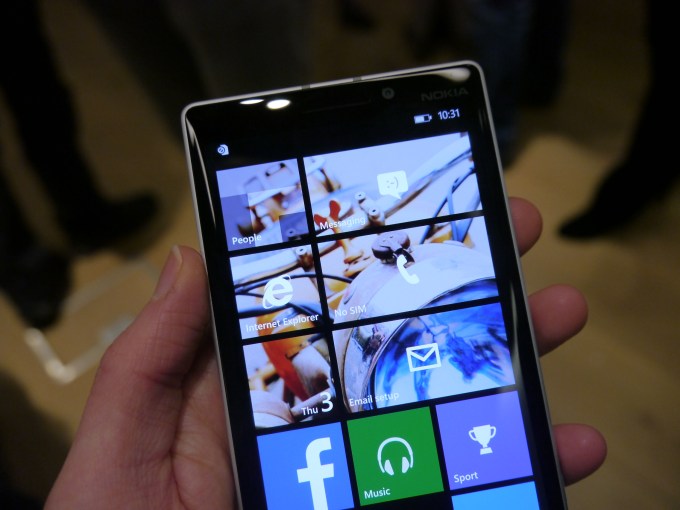 The Lumia 930 screen is pure eye-candy, with curved Gorilla Glass and clear, bright colours on a full HD OLED display.

Details looked crisp during my brief hands on, and while saturation levels are a little on the vivid side — especially when compared to Sony’s Xperia line of smartphones which opt for an  intentionally more realistically toned look — they are not pushing too far in garish directions, as can be the case with some Android handsets.

Many of the extras coming with Windows 8.1/WP 8.1 focus on Microsoft burnishing its three-screen strategy — so you can unify your usage of Windows devices across the PC, Xbox-controlled living room TV and smartphone.

So, for instance, content such as your photos are automatically synced across all devices, via Microsoft’s OneDrive cloud storage, and you can start watching a movie on one device, pause it, then pick up your viewing on a different Windows device. You can even turn your phone or tablet into a remote control for your Xbox — by using a SmartGlass mode.

Another feature allows for Wi-Fi login details to be synced across devices, so you don’t have to re-enter passwords on all devices. And you can choose to opt have the same look and feel on your start screen across all your devices, should you prefer.

If you’re not fully signed up to the Microsoft ecosystem, with multiple Windows-branded devices already in your possession, none of that is not going to be too exciting but Microsoft is clearly hoping to make its environment increasingly compelling and convince people with one or two of its devices to get the full set, pull up a chair and stay a while.

Elsewhere, the Windows Phone 8.1 update adds a Swype-style text input system to the keyboard — which Microsoft is calling Word Flow. This is a nice addition which plays catch up with Android and gets one over on iOS — as the latter continues to preserve its keyboard software in digital aspic. Hopefully Word Flow will be the tiny cut that finally spurs Apple to keyboard innovation action.

The Word Flow system includes next word prediction that learns as you use it in order to surface more relevant language. Microsoft is claiming its keyboard software is the fastest in town. But really that sort of thing is down to user preference and typing style. Still, it’s great to see another input method on tap for Windows Phone users.

Another new software flagship is Cortana — a digital personal assistant (aka Microsoft’s Siri) that learns about you by taking a cross-section of your usage, via your Microsoft account, so it can pull threads on your web usage, email, apps, the people you interact with, and so on.

Cortana was not working on the version of the device Nokia was showing at today’s briefing so there was no chance to kick the tires there. It also won’t be available in the U.K. until later in the year — with its initial launch being in the U.S. Whether it lives up to the big promises and ends up being more useful at prompts and recommendations than Google Now remains to be seen.

The 8.1 update also brings support for Bluetooth 4.0 — a very welcome addition, as it will allow developers who are building interesting hardware add-ons for smartphones to choose to support Windows Phone, not just iOS and Android — and there’s support for Miracast, so you can stream content from the Lumia 930 to a TV.

Additional 8.1 updates focus on tweaks that users had apparently requested, such as a new notifications screen that Microsoft calls Action Center. This is brought on screen by swiping down from the top of the device — as with Android or iOS — and displays a list of alerts, such as new emails or phone calls, along with configurable short-cut buttons so you can quickly toggle on/off Wi-Fi, or Bluetooth, or flight mode. And so on. 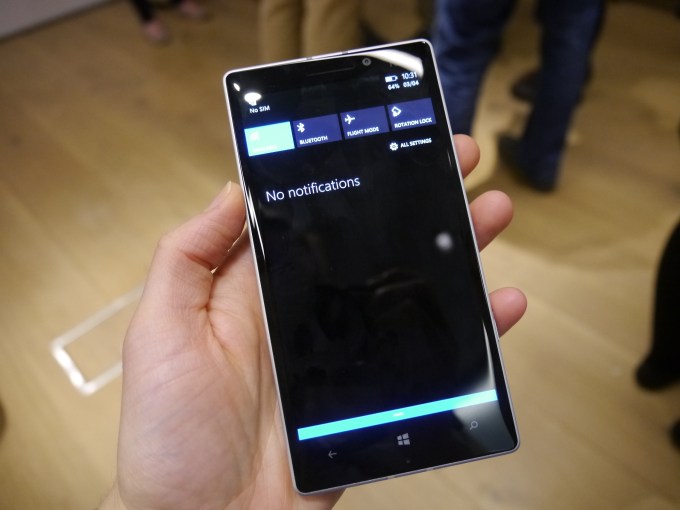 Likewise another user-requested feature is the ability to add a photo as a homescreen background — rather than having to stick with only configuring the solid colour of your homescreen Live Tiles. Microsoft’s compromise here to implement what users want (i.e. background photos) within its Live Tile framework is to have the photo appear behind the tiles, with the tiles themselves overlaid over the picture.

Another 8.1 update extends the default Bing search function so it’s no longer just a web search, but also trawls the device for related content and organises results into handy silos like ‘images’ and ‘videos’. Microsoft said it will also foreground apps in this search — as a way to push more users to download developers’ wares. 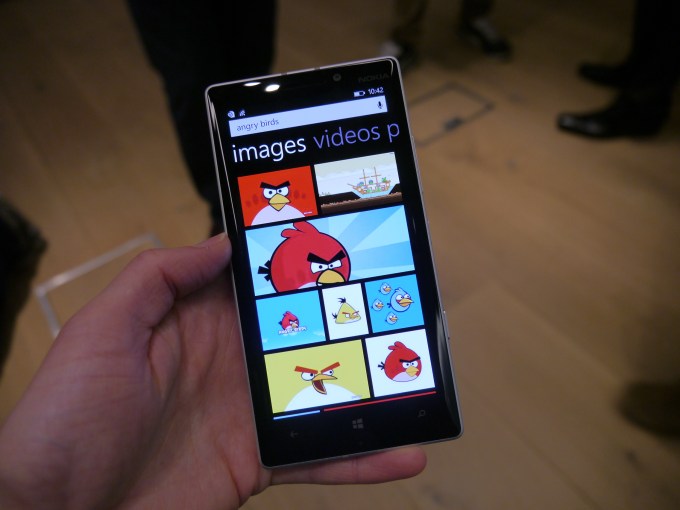 Other software updates coming to the Lumia 930 include tweaks to Nokia’s Creative Studio photo editing software, with five new filters and features such as non-destructive editing.

The Lumia 930’s camera editing tools offer users some powerful controls for users to manipulate their imagery but the interface can be rather cluttered with options, as a result.

Microsoft is gradually getting its services-centric focus and three-screen act together — and building in the syncing links across its OSes make that sort of unification worth the buy in, pouring effort into cloud services such as OneDrive, SharePoint and OneNote. Lumia 930 users get up to 10GB of free storage on OneDrive — if they turn on auto photo syncing — which gives them another incentive to stick with Microsoft-branded services. Albeit Redmond is catching up/competing with third party alternatives, here, such as Dropbox — which are frequently bundled with Android handsets. Apple’s iCloud offers 5GB free storage so Microsoft is at least doubling down to make its services offering stand out from iOS.

For Redmond’s three-screen offering to genuinely excite users, it’s going to need it to be rock solid reliable — and unfortunately that was not the case in this morning’s tech demos. Polishing out the sort of syncing problems on show is going to be essential in future, if users’ are to be convinced of the benefits of locking themselves into a Microsoft ecosystem. This stuff really must ‘just work’. So there looks to be some more work for Microsoft to do there.

It’s also notable that a lot of the tweaks to Windows Phone 8.1 add in features that users have likely got used to via competing platforms — such as a swipe-down notifications menu, or the ability to customise the look and feel of a device by choosing their own background photo. On the one hand Microsoft caving to add such features to Windows Phone is a concession that it’s failed to convince people to fully adopt its alternative to the mainstream — i.e. Live Tiles for notifications and personalisation. However, responsiveness to user feedback is most definitely a strength — and something that hasn’t always been associated with a Microsoft modus operandi. Ultimately, listening to users and giving them things they are hankering for is far more important than trying to retain something different just for the sake of it. That augurs well for a new era in Redmond.