SRCH2, an enterprise software company founded by ex-Googlers and Stanford PhD’s and focused on building faster, more efficient search technology, is expanding its reach to mobile consumers and mobile developers. The company is now launching a new Java SDK for Android app developers, which will allow third parties to integrate the SRCH2 technology into their own applications.

In addition, a consumer-facing mobile app showcasing what SRCH2 technology can do has also gone live in Google Play, offering end users the ability to search and find any contact, message, calendar invite, music, app and more.

To give you an idea of the various use cases for consumers, this search functionality supports searching by things as specific as a song’s artist or a title fragment, or users can look for an address from a calendar invite from a particular time frame, for example.

Founded back in 2008 by ex-Googler Chen Li, also formerly of IBM and HP, SRCH2 has been primarily focused on its in-memory search engine technology for enterprise customers. The technology, a competitor to Lucene and Endeca, is now used by customers like CBS, Huawei, and most recently HTC, which is planning to integrate SRCH2 natively into their new Android smartphones launching in the first half of this year.

In fact, it was HTC’s move to integrate SRCH2 into the kernel that gave the company the idea about making this move to mobile, and the subsequent launch of its SDK.

“When we first did that deal, we started realizing that there’s some opportunities there that maybe we should have thought through a little bit better,” admits SRCH2 CEO Dev Bhatia. “Why is it that a major handset manufacturer wants to run this kind of an enterprise search software inside a handset?,” they asked themselves. “As it turns out, the way it’s built is really efficient, and it’s small enough and thin enough that it can do that high-performance stuff…and still fit on a handset or any device,” Bhatia says.

While the datacenter-focused technology was 40 times faster than competitors, the company claims that on mobile, it’s now 400 times faster. (SRCH2 references a study from a third-party report as the basis for these figures.) Plus, it uses less power, which is also an important factor on mobile.

The SDK is designed to be integrated into mobile applications using 5 lines of code, and once there, it provides the end users of that application with a feature set not previously available via other search utilities.

For example – as you can see when using the new SRCH2 for Mobile consumer app – the app can adapt itself as you use it, learning and returning more relevant results the more you interact with it, while also offering things like instant, typo-tolerant search-as-you-type, index all your phone’s application, log your interactions with them to rank those you use more often higher, and more.

Though clearly, they’re a technology provider, not a design-focused company: 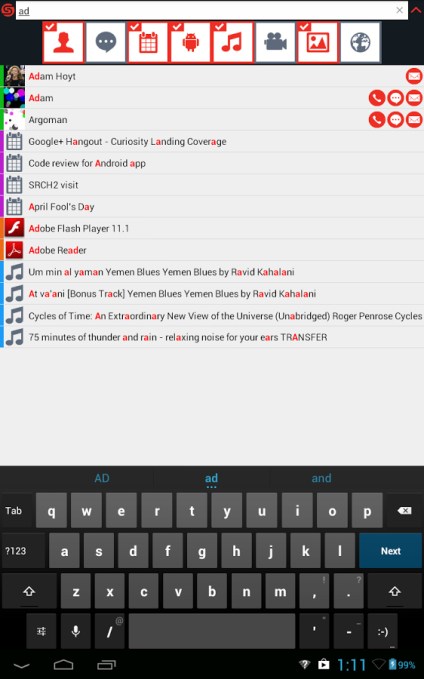 The company envisions the initial customers for this new SDK will be more in the business utility space, and likely on the enterprise mobility side of things. Bhatia details a potential use case, explaining:

“Let’s say the client is a major cloud enabler of sales people, hypothetically. Salesperson #1 in Austin, Texas logs a call and makes a change to his data…that gets propagated to the cloud as is available to salesperson #2 who’s in Brazil interacting with the same global client,” says Bhatia.

“What I’ve just described is federated search for mobile – no one in the world can do that, because we’re the only search engine that can sit on a phone. And the potential for that is massive,” he adds.

In addition, that company’s partners could connect to that search capability via API, which is where the Java SDK comes in.

SRCH2 is backed by funding from Data Collective and Eric Schmidt’s Innovation Endeavors. The new SDK is here, and the consumer app is a free download on Google Play.