Want to stalk people via email, so you’ll know the moment they read your message? Or maybe you want to know if they gave your message a good look, instead of only a glance? Mailtracker, a newly launched app for iPhone, allows you to do just that, and more.

Email stalking? Oh god, why am I telling you about this one? I’m already imagining the horror of the PR person’s well-timed, follow-up phone call thanks to this technology.

But I have to admit, it’s pretty impressive that you can now easily do this type of email tracking from your iPhone, while still using Apple’s default Mail application.

To be clear, the Mailtracker app itself is not meant to be a mail client that you would use to send and receive emails, but rather a tracking application for monitoring your email analytics. Currently, the service works with emails sent via Gmail, Google Apps, Yahoo, and Outlook.com/Hotmail accounts, the company says, and it will add support for Microsoft Exchange in the future, given the obvious business implications for its software.

In addition to alerting you when an email has been read, Mailtracker offers other analytics, too, including how many times the email was viewed, how long the email was read for, the recipient’s location information, and their device details. So yes, very stalker-y.

You can also star and mute notifications and quickly take action after an email is read using Mailtracker’s “Reply” and “Call” features.

The company, Answerbook, is the third startup from co-founders Chris Nguyen and Lee Liu, who previously built and sold an early location-based job finder acquired by onTargetjobs, and later launched TeamSave, a social commerce platform that helped publishers, including eBay, get into the daily deals market.

While there, Nguyen says they began to realize the importance of email messages and what it meant when those emails were open and read. However, it wasn’t until last summer, when he and his wife came across an ad for a San Francisco apartment on Craigslist that sounded a little fishy, that the idea for Mailtracker was born. 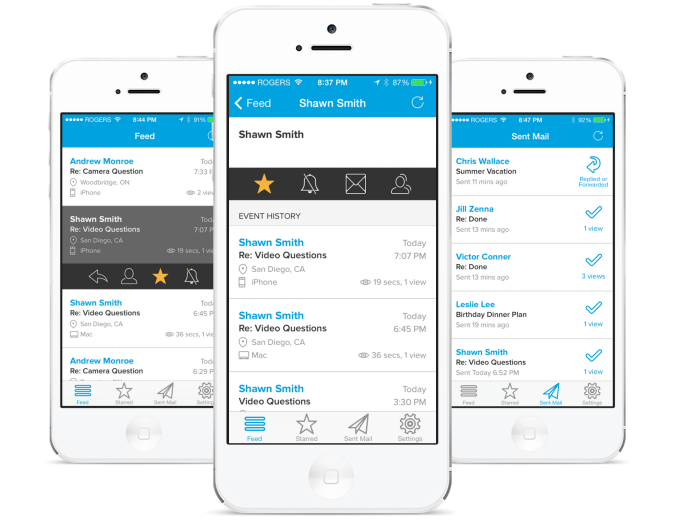 Nguyen asked Liu if he could whip up a prototype that would let them extract some basic information about the ad’s poster via email. Using this early version of what later became Mailtracker, they quickly learned that the email sender was actually based in Nigeria and read the email on a Windows PC for 31 seconds. (Yes, the apartment was too good to be true, as it turned out).

Now that prototype has morphed into the consumer-facing product Mailtracker.

Like other mail analytics providers, Mailtracker also uses tracking pixel technology – a small, transparent image that’s downloaded when an email is viewed, allowing the sender to track the image request from their own server. But what makes the app interesting is that it’s introducing this type of tracking on the iPhone.

To do so, Mailtracker requires the installation of a configuration profile on the iPhone to get started, which is what allows the app to insert the pixels before the message is sent from Apple’s Mail client.

The company is now working on a version for Android and desktop users, due out in a few months, as well as a MailTracker API that will help business customers track not just opens, but also email engagement. The API will rate recipients based on their email opens, how long messages are read, and how many times they read the message.

“It’s kind of like an engagement score, or engagement as a service,” explains Nguyen. “We want to be able to be plug-and-play quick, kind of like the Twilio model,” he says of the forthcoming developer option.

For now, the consumer-facing app is free to use with two email accounts, and those who want to add more can pay for the Pro version of the service via in-app purchase (either $4.99/month or $44.99/year).