Split, a newly launched “anti-social” application and competitor to the recently buzzed about app Cloak, is offering yet another way for users to tap into their social networks in order to avoid other people, instead of connecting with them. The app is backed by $1 million in seed funding, which includes an investment from entrepreneur and fashion mogul Chris Burch. (Wonder who he’s avoiding?)

Like Cloak, the general motivations behind the creation of Split are the same: today, we have plenty of ways to find our friends using mobile applications or see who we know nearby, but we don’t have anything that serves the opposite use case. That is, we don’t have services for those times when we want to be left alone.

Founder Udi Dagan, also currently the CEO of Loolyan, an experience and brand design agency working with startups and brands like J.C. Penney, Houzz.com and Eatwith.com, says he came up with the idea a couple of years ago after a particularly distressing evening.

In a conversation TechCrunch had earlier this week with Dagan and Split investor Goldman, Dagan explained what prompted Split’s creation.

“I ran into two ex-girlfriends in the same night,” Dagan states. “It was an awful night, really…I said, ‘that’s too much.’ I was really frustrated.”

“He’s a bit of a player,” Goldman added with a chuckle.

Dagan began working on the idea for Split a few months later, and now Split has grown to a seven-person team based in Tel Aviv. 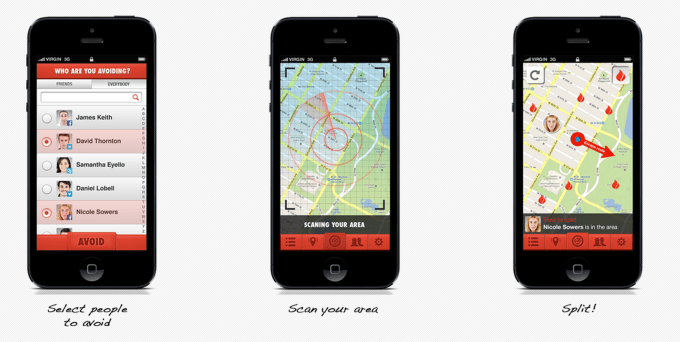 Though Cloak launched just ahead of Split and garnered a lot of press around this idea of an “incognito mode for real life,” Split as of today is actually the more powerful application. While Cloak taps into only Foursquare and Instagram to determine which friends are nearby, Split launches with support for Foursquare, Instagram, Facebook and Twitter. It also supports iOS and Android users, while Cloak is still an iOS-only application.

And while Cloak’s user interface exudes this sense of being stealthy and sly with its dark green-and-black map and roving avatars, Split instead looks much like any other social networking application, except that it asks you which among your connections you want to avoid, not befriend.

You can then see where those people are on Split’s map, allowing you to plan your escape. It also offers you real-time alerts, event notifications (i.e., if they join an event you’re attending), a list of “danger zones” (their favorite locations), as well as tools to save and scan remote locations, and more. The remote scanning tool is an in-app purchase, but currently the price is set to free.

Though it may seem silly that there are now two “ex avoiding” applications on the market, there are some legitimate use case which are not quite so funny, such as avoiding abusive or violent spouses, exes or stalkers, for example. You could also do naughtier things, too, of course, like cheating or taking a “sick day” where you don’t want to run into your boss.

“Everyone has a different answer [for using Split],” Dagan says. “It’s not necessarily for people you hate.” It’s anyone you just feel uncomfortable around, and don’t want to see right now, he notes.

“Or look – it’s like, I just finished work, and I want to have this pint of beer. Just let me be,” says Goldman.

The company is working now to add even more social networks to the app, including things like Google+ and even Yelp.

Split is a free download on iOS and Android.