While Box was widely expected to be a money-losing shop, the extent of its losses and that its deficit is increasing surprised some. What the losses mean in the context of Box and its future is a complex question, but one worth answering given that if the company struggles during its flotation, it could close the door for other tech IPOs for some time.

That would have a trickle-backwards impact of harming private-money valuations for nascent companies and reduce venture returns, thus harming continued investment. In short, if you are in tech, you want Box to succeed, as it’s good for the current ecosystem you are hoping to blossom in.

So we need to understand how healthy Box is financially today, and where it is headed next in the context of product. Component to both those questions is Box’s cost structure, and where it is currently investing the most heavily.

Cash, Or A Lack Thereof

Box recently raised $100 million more to fund its operations. That round, taking place in December of 2013, came not a moment too soon: Box ended the period concluding on January 31, 2014, with $108 million in cash and equivalents. You can infer a timing period in late 2013 when Box was short on available funds.

$108 million sounds like a towering sum, but for a company as unprofitable as Box, it isn’t. With a net loss of $168 million in its most recent fiscal year, Box would presumably burn through that sum in less than a year. That would put it back in the same spot it was a year ago: Looking for new capital.

To get around that, Box wants to raise $250 million in its IPO. That figure could be a low ball. Twitter put up a very low dollar cost per share, for example, when it first went public. That figure went up. Box could refile if interest swells. That’s perhaps optimistic, but the firm certainly wants to snag cash now, because it will continue to lose money for a protracted period.

That’s not me being negative, that’s the official line:

As a result of our continuing investments to scale our business in each of these areas, we do not expect to be profitable for the foreseeable future. Furthermore, to the extent we are successful in increasing our customer base, we will also incur increased losses due to upfront costs associated with acquiring new customers, particularly as a result of the limited free trial version of our service and the nature of subscription revenue,

What’s nice about a fresh S-1 is that you get to see a company beat itself up. But honesty bubbles up from blood, and Box is frankly stating that, at worst case, its losses will become worse before they get better. This is why its cash position, temporarily in the nine figures — as it was at the end of January — is wildly precarious.

Enterprise sales is a long process, and contracts sold tend to expand over time, providing a stronger ROI to past expenses as time progresses. That’s to say that Box’s massive investment in marketing and sales of the past few years will continue to bear fruit for the firm.

Box depends on its free accounts to draw in new users, who then convert to paid accounts, and later drag their employers or employees along with them. This is actually standard for enterprise-facing SaaS companies. It makes sales calls quite warm, given that users are already seeded into the corporation on the other end of the line. (This is why companies like Box have to play nice with IT: It lowers sales friction, but that’s another story.)

Box separates its accounting — fairly, mind you — in the following ways: The expense of supporting paying customers is called ‘cost of revenue,’ and the cost of supporting free users is counted as a marketing cost.

As you make the move, you become a revenue source and are treated as such. You can’t really be a cost of revenue if there is no revenue attached to you. Let’s take a look at Box’s marketing costs for the past few years:

The cost of supporting Box’s free users, who are an important part of its future profits, is high. Note that the highlighted sum includes various other costs, but given that 93 percent of Box’s users are of the free variety, they are not an insubstantial weight.

If Box wanted to better leverage its monetization of its extant user base, and continue to attract new and larger contracts with businesses, it will want to move up the value stack. That’s just what it is doing.

And this concludes our cash discussion: What will Box need to continue to develop its product while sustaining the heavy costs of its current operations? Cash. And where will it get it? The public.

Product: A Pivot Toward Enterprise Collaboration

That Box wants to extend from mere storage into products that sit on top of storage is fact. Its work building Box Notes, hiring former Microsoft Office guru Steven Sinofsky, and the like point to a future in which Box wants very much to sell you more than a place to park your files.

This means greater per-contract fees, lowering the implicit cost of its free accounts system of picking up new paid accounts. This, I think, will be vital to Box making its long-term unit economics work.

The pressure here is amplified by a host of competition, and declining per-gigabyte fees. This cuts at what Box can charge for a key part of its value proposition, as larger, better monied players like Google and Microsoft beat each about the ears. The dance that Google and Microsoft are playing is different from what Box offers, but here’s the new reality: Cloud storage without editing and collaboration tools is moot, as are editing and collaboration tools without cloud storage.

Box and Dropbox were early to the cloud game, but slower, it seems, to the editing and collaboration game. Box calls this space Enterprise Content Collaboration. The company separates it from file storage. Here’s Box’s own rubric for how to view its competition:

This is distinction with difference.

It’s harder to devalue the utility of an ounce of productivity than it is a gigabyte of storage. And given that the cloud storage market is trending rapidly toward per-gigabyte marginal costs of zero, this matters. (Aside: Egnyte is doing fun stuff in this space, and should avoid the harshest aspects of Box’s marketing costs.)

From the S-1, here’s the section entitled “Box Apps” that sits just below the “User Access Layer”: 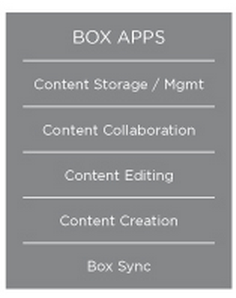 Precisely. Dealing with content itself gets three spots while storing the darn stuff gets two. This is a fair look at Box’s future from a product perspective.

Box’s pivot to the enterprise is existential for the firm. Friend of TechCrunch Matt Rosoff did a fine job today detailing the bull case for Box, that its growth rates are impressive, and that, in frankness, its enterprise activity is performing well.

The enterprise pivot is working. Last year, 57% of orders came from enterprises, defined by Box as companies with more than 1,000 employees. That’s pretty remarkable for a startup that really only began catering to enterprises (as opposed to smaller businesses) about three years ago.

Given how much Box has grown in the past three years, I’m less impressed by the 57 percent than Rosoff, but that enterprise sales are a majority does matter.

If a large chunk of Box’s costs come from supporting free-loading free users — excuse me, potential individually paying account convert — and it’s increasingly selling to enterprise clients, the pipe between free users and large sales is doing well, perhaps. I think that it’s hard to say that’s correct, as if it was, we would expect the total percentage of Box users that are monetized to be higher.

But Box can’t lose its free users, as they have been a self-converting, and conversion-helpful cadre for the life of the company. Also, that toothpaste is far from the tube — how would Box turn off free usage?

Since it can’t leave that part of its history behind, it can only double down and hope that its revenue ramp will eventually out-class steep growth in its operating expenses.

Standard SaaS play, right? Well, yes, but that argument would hold if Box were losing twice as much or half as much. You have to ask yourself when will the red and black lines cross? And if Box needs more capital to get there.

I’d wager yes. So this is not its last financing rodeo.

All told, keep in mind that Box is IPOing earlier in its growth cycle than it likely wanted to. It needs the money, and that does say something.