SnipSnap, the growing mobile couponing app (and former TechCrunch Disrupt battlefield participant) with nearly 3 million users, launched a second app today to address a trend they had been seeing among their current user base. Some SnipSnap users had begun submitting handmade, personalized coupons to the service – for example, things like “Good for 1 date night,” or “Good for 1 foot rub.” The company had to filter coupons out of its main feed, but later realized that this use case may deserve its own standalone application.

And so, GoodFor was born.

GoodFor, to be clear, is not a new direction for SnipSnap, but rather a side project cooked up by the team, and more of an experiment. Explains SnipSnap CEO and co-founder Ted Mann, in the company’s early days, their spam filtering technology was focused more on keeping photos that weren’t pictures of coupons off the service. (SnipSnap, for those unfamiliar, lets you photograph paper coupons and share them with others).

“You’d be surprised how many pictures of people’s body parts and pets come through” Mann says. “Well, maybe not so surprised,” he jokes.

SnipSnap was able to build tools to filter these photos out, but soon, they were faced with a new problem. “To our shock and frustration, we kept seeing non-coupons coming through – but this time it was more of the DIY variety,” says Mann. These coupons didn’t fit into a retailer-specific app like SnipSnap, but the team grew somewhat fond of them. “They were funny, often touching, and even occasionally artful,” Mann notes.

The coupons always began the same way: “Good For 1…”

Initially, the team made a holiday card using these coupons, but SnipSnap’s VP of Product, Kyle Martin and Mann kept thinking how fun it would be to have an app that actually allowed you to make them yourself. 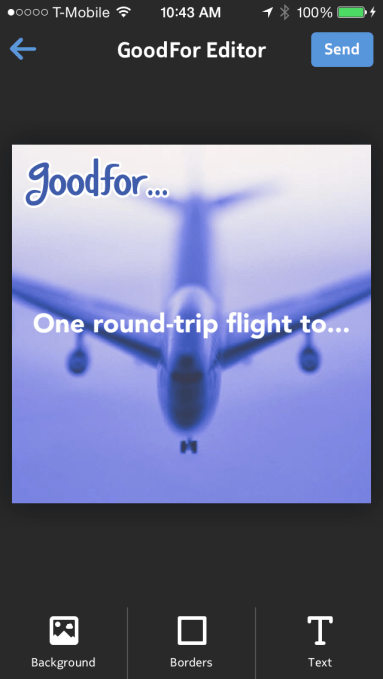 The new app, GoodFor, took about a month to build, and will let you do just that. Plus, it will also allow the company to test other features that it could eventually port over to its main application, Mann tells us.

The app itself is well-designed and simple to use. After signing up, or connecting via Facebook if you choose, you can then pick a “GoodFor” coupon from one of the app’s three main sections, “Featured,” “Popular” and “Most Recent.” Some of the coupons are plain with just a colored background, others use photos, and others are designed with clip art-like decorations instead.

If you want to build your own coupon, an included editor lets you type in the text of your choosing, or get a random idea by tapping “surprise me.” You can choose a photo background or one of the many templated styles GoodFor provides, organized into various silly categories like “Have Fun,” “Let’s Party,” “Crazy Colors” “Romantical” and more. You can also add borders and shapes to the coupon, then tap the checkmark to finish the design and share it with a family member, significant other, or friend, via text or email. (Messages that prompt recipients to download the app, of course.)

Since the “coupons” are basically just small images, I’d like it better if GoodFor would allow you the option of sending the coupon itself, with a message that read something like “Created by GoodFor: Download here on iTunes,” for example. After all, too many apps these days are spamming users’ contacts with unwanted invites, making recipients wary of unknown messages. Letting them first see the actual (and cute!) end results of what GoodFor can do may be a better way to attract real users to the service, rather than just raw downloads driven out of curiosity.

Still, if you can at least convince your significant other to pick up GoodFor, I could see the app being a fun thing for couples who want to share coupons amongst themselves. It could even be something the kids could use to design coupons for mom or dad, they way they once did for with crayons and paper.