Twitter says that “most users are experiencing issues accessing Twitter on web and mobile apps. We’re looking into it.”

According to the API status page, Downforeveryoneorjustme.com, and tests within the TechCrunch staff, the service is experiencing some serious performance issues.

And it’s not just the desktop website that’s failing — Twitter for iPhone is down, as well as TweetDeck. We’ve confirmed that most activity out of Twitter, including the API and streams to third-party apps shut down right around 11am PST/2pm EST.

Users are experiencing issues with loading their timelines and posting tweets (which, it turns out, is more difficult to track without the help of Twitter). Unlike partial outages where certain features go down one at a time, Twitter currently shows no signs of life. 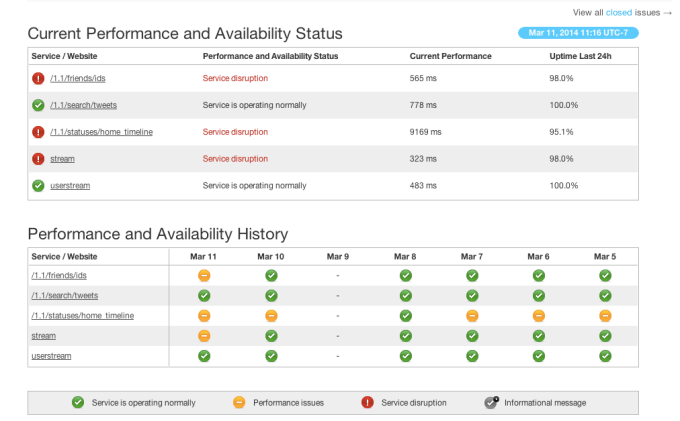 We just noticed the outage as of 2:00pm ET, and are reaching out to Twitter for more information.

Update 2:34pm: Things are working off and on.

Update 3:03pm: We seem to be back on track, but don’t be shocked to see things lag a bit.

Update 3:34pm: Twitter has posted the following statement on the matter:

During a planned deploy in one of our core services, we experienced unexpected complications that made Twitter unavailable for many users starting at 11:01am. We rolled back the change as soon as we identified the issue and began a controlled recovery to ensure stability of other parts of the service. The site was fully recovered by 11:47am PDT. We apologize for the inconvenience.