India’s nearly 100 million smartphone users are beginning to shop online at a pace that the country’s biggest e-commerce companies such as Flipkart and Snapdeal are expecting the mobile traffic to surpass their desktop user base anytime this year.

And as these e-commerce marketplaces shift their models to woo customers buying on mobiles, Paytm — a mobile shopping app — wants to leapfrog this transition by targeting India’s more than 230 million mobile Internet users. The shopping app, launched in February this year, comes with a mobile messenger and a digital wallet.

The Delhi-based startup is chasing an audacious goal — to process 1 million orders in a day by 2016 before any of the bigger, established e-commerce rivals reach that milestone. Currently, Paytm is shipping around 320k orders a day.

Inside the One97 offices in Noida near Delhi, the conference walls and workspace have the mission statement written all over — “1 Million Orders A Day Will Happen Here First.”

Whether or not Paytm becomes the first Indian e-commerce company to ship 1 million items in a day ahead of others, it’s becoming increasingly clear that mobile commerce might just win this race in India. Last month, Flipkart co-founder Binny Bansal told me in an interview that the company’s mobile users now contribute almost 40 percent of the traffic, up from just 15 percent last year.

“More than 20 percent of our orders now happen on mobiles, a year back this was just 5 percent,” Bansal added.

This year alone, around 225 million smartphones will be sold in India, and many of them will be accessing the Internet for the first time ever. While the Indian Internet user base is around 200 million currently, only about 10 million of them are transacting online. And this is where the mobile-first Internet users offer a lucrative opportunity, not just for the existing e-commerce biggies, but also for mobile commerce startups such as Paytm.

Paytm’s founder Shekhar is not new to entrepreneurship. His earlier venture One97, a mobile content and marketplace for digital goods, is already profitable and runs the $100 million Mobility Fund in alliance with SAIF Partners.

The mobile shopping app was launched in February this year, but a series of other products and features have been in the works over the past two years. In 2011 Paytm was incubated with a seed funding of around $10 million from One97’s internal resources and the Mobility Fund.

Since then, Paytm has pivoted from being a digital goods marketplace (mobile talk time recharge etc.) to an e-commerce marketplace. The idea to launch a mobile marketplace began to shape up when the startup saw its mobile traffic grow exponentially. By January of this year, Paytm was doing around 3,20k orders a day, of which nearly half were happening on mobile phones. The app has seen 6.5 million downloads since end of 2011. Now, Paytm is hoping to convert its existing base of mobile app users into mobile shoppers.

But just being a marketplace was not enough. As we have seen with other e-commerce sites such as Flipkart, a payment gateway is the key to ensuring complete shopping experience for users. Flipkart invested to build its own digital wallet, Payzippy, in August last year.

Offering a mobile payment solution in India requires the Reserve Bank of India (RBI) license. To this end, Paytm acquired a five-year mobile wallet from RBI last year. Over 1.5 million users have downloaded the mobile wallet to date.

The company made another important acquisition — of messaging app Plustxt — in February 2013 for $1 million.

“For a country obsessed with bargaining while shopping anywhere, we needed a messenger that could allow users to negotiate prices with merchants real time,” said Shekhar. Currently, Plustxt allows conversations in seven Indian languages. 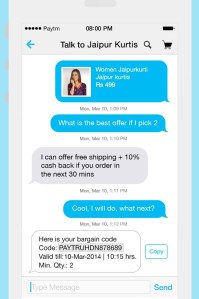 Paytm’s shopping app combines the old-world bargaining that happens with street vendors in an offline marketplace with an intelligent product discovery experience and the ease of buying on mobile. Users are able to do “real-time bargaining” with merchants selling products on Paytm through its live chat feature.

Currently, Paytm has around 100,000 items from 250 merchants in the marketplace. In few weeks, after Paytm’s Android app gains some traction, the startup is aiming to have over 1 million items. This will also mean expanding beyond the categories of clothing and home furnishing that Paytm offers now.

“A pure mobile play will not just help us do same day delivery, but even explore ways to ship products within hours to customers using geo-tagging to match with nearest sellers,” Shekhar said.