Newly launched iOS application TheNeeds is the latest attempt at offering users a better, more personalized news-reading experience with a service that focuses not only on your interests, but also how those interests evolve over time. The app, something of a competitor to the magazine-like Flipboard, or a community site like Reddit, helps to surface the best articles, blog posts, videos, social updates and more, then follows your interactions to see what sorts of things you’re actually reading and engaging with, versus what you’ve more explicitly stated your interests to be.

TheNeeds’ co-founders have been working on this idea over the past couple of years, but only moved to San Francisco last year. Co-founders Gabriele Pansa and Luca Albertalli met while working at Accenture doing management consulting, then soon brought on TheNeeds’ third co-founder Emanuele Cesena whose background in semantic technology, machine learning and security, helped to develop the service’s backend.

The team first launched TheNeeds last year, initially as a web-only service, allowing them to test and iterate on their ideas. And last week, TheNeeds soft-launched on the iTunes App Store, with plans for Android slated for next summer. 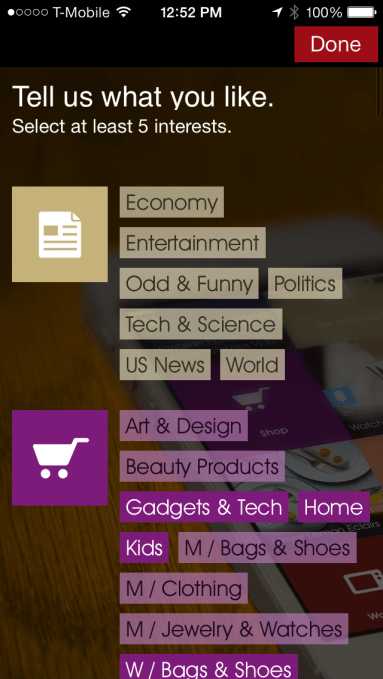 Though the idea of a personalized, social news reader is hardly new, according to Pansa, what makes TheNeeds stand out is the technology that powers it under the hood.

“Our uniqueness is the sophistication of our core technology – a powerful interplay of artificial intelligence and social interactions,” he explains in an interview. “We combine machine learning, collaborative filtering, and editorial selection to analyze thousands of signals from users’ behaviors and the web at large in order to filter content for the specific user and provide a whole new level of tailored content curation,” he adds.

Pansa also says that the company uses real-time analytics to map out what it calls the “interest DNA” for each individual user on its service.

Using the app is fairly straightforward, though it does offer a tutorial so users can learn the basic gestures involved in navigating the content through presses and swipes. 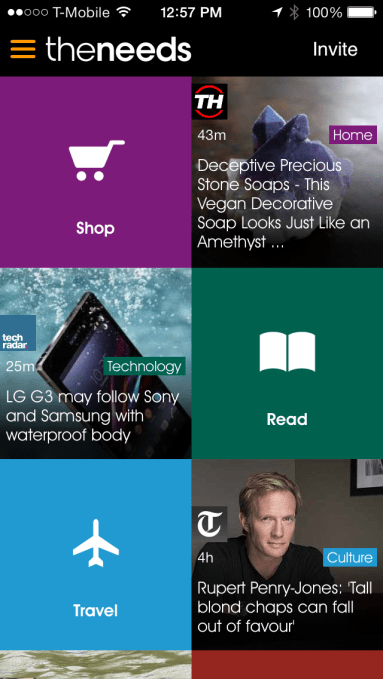 After setup is complete, a tiled interface displays, allowing you to view headlines and sections, including high-level categories like Travel, Shop, Play, Interact and more. The look-and-feel is reminiscent of Windows 8 or Windows Phone’s tiles, which is due to the fact that TheNeeds launched on Microsoft’s Windows 8 app store before coming to iOS (thanks to Microsoft’s investment in making that happen).

Within the app’s interface, you can bookmark or re-share content both in the application and on the broader social web, in addition to tapping on posts to read the article or update behind the headline.

However, I found the navigation wasn’t as smooth as something like Flipboard, and even seemed to freeze up at times, making it hard to move back and forth between sections. Headlines could also be difficult to read on the iPhone’s small screen, especially when sourced from a Twitter update, for example, which would include both the text and URL in one small square. In other words, in terms of its user interface, Flipboard and other news readers like Feedly are still going to be tough for TheNeeds to beat, no matter how smart it is behind the scenes.

As noted above, the app reportedly learns over time what you’re interested in by watching what you tap on, save, and share, and then updates its selections accordingly. I haven’t had access to TheNeeds long enough to offer an opinion on how well this works, but the idea is intriguing.

The company has $500,000 in funding from its founders and angels in a small round closed last year. The six-person team is now in the processing of raising a larger $1.5 million seed round from both angels and VCs.

TheNeeds is available here on iTunes.