It’s been an interesting few weeks for Silicon Valley insiders. Secret, the anonymous messaging app, has caused several communication crises for some prominent tech companies, and many more are no doubt on their way. By making the entire revelatory process anonymous and shareable, even seductive, the app’s attracted tech company leaks and spiteful rumors like never before.

But from a broader perspective, all the industry chatter over Secret only points to a much bigger problem that’s still largely unaddressed: Few tech companies have created a comprehensive strategy for communicating in the social media era, when a CEO’s thoughtless Facebook post can garner instant international outrage, or an embarrassing YouTube video can easily get sent to all the inboxes of the major tech news sites in minutes.

For startup founders, whether you like it or not, you’re more vulnerable than ever before. And while the challenge may seem too daunting to deal with, a few proactive strategies can go a long way.

In an age of real-time crisis communication, tech companies need to do more than keep a daily eye on social media channels where rumors about them are most likely to spread — they also need to have a plan in place to instantly counter those rumors. Is someone saying something untrue about your company, for example, insinuating they’ve heard it’s in financial trouble? Get in front of the rumor and refute it immediately before it snowballs.

Of course, that advice doesn’t quite apply if a leak happens to be true, which takes me to my next point. 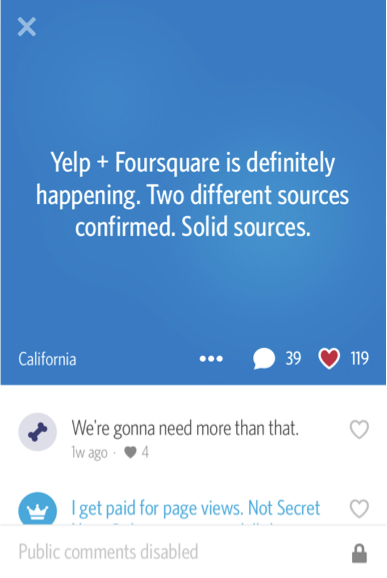 When a company leak shows up on social media, it usually reflects a failure of management and corporate culture, poor internal communication, or weak HR support. The disgruntled employee is your worst enemy. When staffers feel angry, or abused, or in fear for their jobs, leaks are much more likely to happen. As founders, the best way to preempt leaks is to develop and foster a culture of transparency and respect. Show your employees you trust them, and 99 out of 100 times, they will follow in kind.

One issue with transparency, though, is it also means your employees may have greater access to sensitive information than they would at, say, Goldman Sachs. So in cases where your employees know of something “leak-worthy,” have a conversation with them to ensure they understand the implications a leak can have, and how bad it would be for everyone involved. Leaks not only hurt morale, but may mar the company’s chances at raising funds or making acquisitions. In especially crucial periods for the company, it might even be necessary to suggest “game time” communication guidelines for employees talking about work on their social media channels.

Beyond this, employees who feel unappreciated at work should have a channel to vent their anger, such as in the human resources office, instead of on social media — or for that matter through offline chat that’s easily overheard. (Microsoft’s acquisition of Yammer famously leaked at the Creamery, a San Francisco coffee shop.) HR should also make clear to employees how important it is to adhere to the confidentiality agreements they surely signed. And if you haven’t closely reviewed or updated your agreements in the last few years, now’s a really good time.

Create a Communication Crisis Response Strategy And Stick To It

Even the best guidelines fall through, which means they need to be coupled with a crisis communications strategy. Ideally, this should include a step-by-step plan designating who on the executive team should be contacted immediately after a leak occurs, how to craft a response, and the next steps to follow. (This is particularly important when the crisis involves communication around a hacking incident.)

At the same time, keep in mind that damaging or embarrassing social media leaks often gain little traction, especially if they’re deleted or made over the weekend or late at night. Therefore, it’s important to gauge the actual damage, and make sure any reaction is proportional. A CEO’s official-sounding, primetime reply to a potentially damaging but incoherent, anonymous tweet few people even saw may just make a potential crisis worse. This brings me to my next point.

Startup founders and tech executives usually live in a very insulated environment and forget that people are observing their every move. For that reason, they need a mentor, such as a seasoned VC or other industry insider, who they can speak with in utmost confidence during moments where they might panic and say something that only escalates a problem.

Ideally this person isn’t directly tied to the fate of the company, and can look at the situation with some partiality. And while a mentor is crucial for outgoing communication, it’s probably even more essential for internal communications, when bad news such as employee layoffs must be messaged with the utmost care.

Be The Kind Of Person People Want To Keep Secrets For

People are often motivated to reveal confidential information from a misplaced (or correct) sense of justice, directing their retribution at people or companies they believe have been harmful. So in addition to management plans and communication strategies, the personal accountability piece for executives needs to be there, too. To maintain confidentiality, it fundamentally matters how you treat clients, employees, and the media. Learning to be a good person who inspires loyalty at all times should be an intrinsic goal for everyone, but in the social media age, it’s fundamental to being a good business person, too.