Considering we humans now have a slew of gadgets, apps and products at our disposal that allow us to track and monitor our health and daily activity, it was only a matter of time before our best friends got one of their own. Last summer, we introduced you to Whistle, a newly-launched startup on a mission to bring Fitbit-style activity trackers to the wagging tails of the canine community. (Cue chorus of approving barks.)

In the hopes of one day building the next, tech-savvy pet brand, Whistle began with an activity monitor, which allows dog owners to keep tabs on their pooches, and monitor the amount of exercise, play and rest they get on a daily basis. The $129 device attaches to your dog’s collar, collecting data on his or her activity over the course of the day via a three-axis accelerometer, which owners can then peruse at length through Whistle’s mobile apps.

With plenty of venture capital in the bank and extensive beta testing now in the rearview, Whistle is gearing up for expansion, as pet stores are beginning to buy in. Initially available exclusively through its website, beginning this weekend, dog owners will be able to buy Whistle’s activity monitor at PetSmart, the specialty pet retailer which claims to be the largest of its kind in North America.

As of now, the national pet supply company will be the exclusive retailer for Whistle; however, depending on the rate at which Whistle leaves PetSmart shelves, don’t be surprised if it begins showing up in the PETCOS and other “big-box retailers” later this year. As of its deal with PetSmart, Whistle co-founder Steve Eidelman qualifies it as “more partnership than just pure distribution.” Whistle will be featured in end caps (the display area at the end of aisles) at all of PetSmart’s 1,300-plus stores, not just buried at the back of the store, Eidelman says.

In addition, Whistle and PetSmart are teaming up on a handful of “co-marketing initiatives,” the co-founder explained, which will be rolling out in the coming months. The first example is an insider’s experience guide for dog owners, called Tails & Trails, that aims to help them discover new, local trails and activities they can enjoy with their pooches. The guide will be rolling out in 50 cities in the U.S. over the coming weeks and will be available both online and in print at PetSmart stores this summer. Over time, the co-founder says, users can expect to see Whistle build out this experience by adding realtime, dynamic elements and then featuring it in the company’s mobile apps. 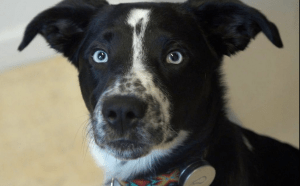 In time with its big-box retail launch, Whistle is also today releasing a sizable update to its iOS app and launching its first version for Android. Over the last few weeks, I’ve been testing out Whistle’s new app on my 6-month-old pup, Charlie (pictured at right), using the device and app to keep tabs on his squirrel chasing and as a log of all the adorable mischief and chewed socks he leaves in his trail. Above you’ll find a demo of the app, a day-in-the-life of a Whistle user in fast-forward, accompanied by gratuitous puppy footage.

With the changes to its mobile apps, Whistle now allows pet owners to set an activity goal for their pooches — Charlie’s is set at 30 minutes, as you’ll see in the video above — and swipe through each day to view data and milestones for each day, and to see whether or not Fido hit his goal. Whistle displays the number of minutes your dog has been active alongside a graph of hour-by-hour activity, under which dog owners will find a feed of the day’s milestones.

Dog owners can now leave comments on those data points, and share them with friends via text, email, Facebook and Twitter. The app also allows users to snap pics of their dogs, leave notes on what they’re eating, or the medications they’re taking, all of which show up in the day’s feed.

Another key piece of the puzzle is Whistle’s remote monitoring, which I frequently take advantage of to stay connected to what Charlie is doing while I’m out solving crime and chasing down dog-related startup founders. Since the app syncs and connects both through Bluetooth and WiFi, you can be at the office and see just how much (or little) your canine is doing at home. This can actually be a great way to know how awesome or terrible your expensive San Francisco dog walker is, for example. Your pooch went out with your dog walker and only got 10 minutes of exercise? Back to Yelp for you, Grasshopper.

For the non-introvert/recluse dog owners out there, Whistle allows shared access so that multiple people can be designated as “owners” of a dog, allowing anyone designated to view Fido’s data, talk about his diet, aggressive drooling issues, and so on. Another key: The Whistle device generally gets about 8 to 10 days worth of battery life, so even if your extended conversation about drooling or your terrible dog walker kills your phone’s battery, your Whistle will keep tracking along.

Whistle, all in all, has actually managed to nail the app’s experience so far — at least as far as iOS is concerned. But social is likely the place where you might begin to notice its limitations, or potential, depending on which side of the fence you sit. 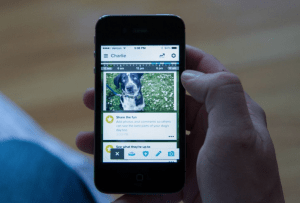 For example, I’ve been asked by a number of people whether or not you can follow other dogs, interact with other owners (friends) through the app and so on. As of right now you can’t, but I’ve been assured by the Whistle founders that this kind of functionality will be coming to the app this summer.

Some will find this more necessary or key to the Whistle experience than others, and that’s just it, your experience with the app will depend largely on what kind of dog owner you are. For the more obsessive dog parents, the app could feel half-baked, and for those who spend a lot of time at the office and just want to make sure their dog hasn’t expired yet, it may be too much data.

Speaking only for myself, the app serves most of my dog owner-y needs as is, but I am looking forward to seeing where Whistle goes from here. There are a lot of routes the company could take in development, perhaps releasing a premium version for people who want more data points, calories burned, crazy social networking integration, filters on photos, badges and all that stuff.

There’s plenty of room for Whistle to become more of a “Path for dog owners,” too, allowing more extensive sharing, the ability to follow other dogs, dog owners and so on. Of course, going the Path or Twitter route can quickly make for a feed that’s over-populated and noisy, so that will be a balancing act.

But I would love to see more geo-location features, and for Whistle to incorporate a few elements of Foursquare. More so than the ability to check in at the dog park, I’d love for Whistle to serve me recommendations on great spots to walk Charlie that I may not have discovered yet, or see what my friends (or anyone for that matter) are feeding dogs of similar ages and breeds. Is Pet Store X more expensive than Pet Store Y? Oh, it is? Thanks Whistle! 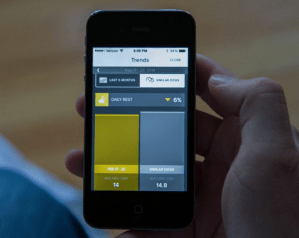 In one form or another, some of this social and geo-location functionality will be arriving in Whistle’s mobile apps this summer. So, if you’re a dog owner feeling antsy for lack of being able to share pictures of your dog with dozens of people who may or may not care what your dog is wearing today, don’t worry. More features are coming.

It’s pretty cool that Whistle allows dog owners to go back through previous days’ activities and view that data in graphical form, while comparing your own dog’s activity to the activity of similar breeds. As Whistle gathers more data on a wider and wider range of dogs, a lot of cool opportunities will likely present themselves — both in terms of data and reporting for dog owners themselves, and for, say, veterinarians who would love to see this kind of data. And have a better way to get in touch with their patients, er, patients’ owners, for that matter.

I’ll leave it at that, but I will say that if you think Fido seems a little depressed, before you go spending thousands on a dog psychologist or pet whisperer, try Whistle. Maybe it’s YOU, pal. Maybe Rex just needs some more exercise. Maybe his ratio of snoozin’ to treats is imbalanced. I don’t know, I’m not a doctor, but as embarrassed as you may be to discover your dog is just bored, wouldn’t you still like to know?

More questionable dog puns and puppy stuff in the video above.