“The average dog is a nicer person than the average person.”

Yes, it’s become exceedingly clear that the Internet has entered into a prodigious, lascivious (and hilarious) relationship with cats. But, at the end of the day, when it comes to the title of “Man/Woman/Child’s Best Friend,” it’s the friendly neighborhood pooch that takes the cake. In my own experience, even when The World thinks you’re an idiot, life gets you down and you’ve forgotten to feed Barkles Barkley, their tails are still going to wag — just at the sight of you. Sure, they may have questionable taste, but there’s probably no better representation of unconditional love than your local canine.

If what Rooney says is true, then it probably helps explain why some dogs have it better than some actual humans. (Exhibit A.) Lately, humans, at least humans in Silicon Valley, have become enthralled with wearable health tracking devices. So, considering there’s already a Birchbox for Dogs, it was only a matter of time before dogs got their own Fitbit. Enter: Whistle, a new startup launching today that wants to be the go-to activity tracker for dogs (and dog lovers).

Now, diligent readers of TechCrunch may say, “but, Rip, there’s already a Fitbit for dogs!” I’d advise them to go outside once and a while, but they’d also be correct. Last month, Jay Donovan wrote about a startup called FitBark (!) that is embarking (!) down a similar path. If nothing else, entrepreneurs take note: The emergence of a Facebook for dogs, a Birchbox for dogs, an Airbnb for dogs (times two), a “Find my iPhone for dogs,” and an Uber for dog walking proves we have an active dog startup market on our hands.

Now, let’s just get this out of the way, since it’s one of the obstacles that a startup like Whistle is going to face: The idea of a Fitbit or a Nike+ FuelBand for dogs is kind of ridiculous. Crying “Bubble!” or rolling your eyes for 10 minutes over the idea of a dog startup market almost goes without saying. No doubt there are plenty of people who will see this as a perfect example of Silicon Valley going too far. (Here’s Will Ferrell putting a fine point on the matter.)

And, yes, when one looks at Whistle, it’s easy to imagine a bunch of former VCs and private equity types sitting around a table, doing some market analysis and applying every successful tech company formula to the dog market in the hopes of finding something that works and raising a few million bucks. However, no offense to FitBark, but the Whistle founders want to go beyond just being a “Reasonable Device for Pet Owners” to build the next big tech-savvy pet brand around a killer line of devices and products — starting with an activity tracker.

As evidence of just how serious the company is (or, for naysayers, the growing “blubble”), alongside its launch, the company announced today that it has raised $6 million in Series A financing led by DCM Ventures, with contributions from a long list of investors, including Red Swan Ventures, Humane Society Silicon Valley President and former VP and GM of Intuit Carol Novello and Pinnacle Foods CEO and former Mars President Bob Gamgort, among others.

Guitar Hero co-founder and Throttle Games CEO Charles Huang, Rapleaf co-founder Dayo Esho, former VP of Operations at Nest Labs, Sling Media and Virgin, John Gilmore, have both joined the company as advisors, along with several other prominent local dogs, and DCM partner and Sling Media co-founder Jason Krikorian joined Whistle’s board of directors as a result of the round.

Again, the real interest in Whistle (and in this space) can be found here and in one of Saturday Night Live’s best re-occurring sketches: Dog Show, which parodies the overzealous and obsessive dog owner. Jokes aside, today, not only does everyone have a dog, but people are willing to go to great lengths to spoil their dogs, especially if they don’t have kids. To that point, there are now more dogs in the U.S. than there are children, Krikorian explains, and Americans spend over $50 billion on their pets every year (see the APPA’s stats here).

Not only that, but a study from the Bureau of Labor Statistics (via Quartz) recently found that people spend an average of “1 percent of their annual budget on their pets,” which is more than they spend on booze and clothing. 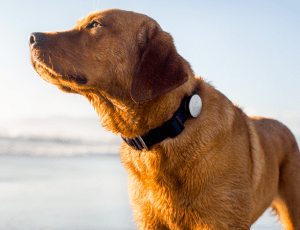 Whistle is going after this audience by branding itself as a company that’s dedicated to helping pets live longer and healthier lives — a mission that’s easy to get behind.

It’s also brilliant that Whistle is starting to build a community that is dog-dedicated, particularly this page of “founding hounds.” The page is hilarious and is a great example of how Whistle is already making smart branding decisions, being “real” and acting like another dog owner you’d be happy to stand and talk to in the park. (Not often the case.) It makes the company more relatable, to dog fanatics or not.

This starts with its first (flagship) product, a wearable activity tracker that connects to your dog’s collar. Similar to other Quantified Self devices, Whistle’s circular, metallic gadget contains a three-axis accelerometer designed to measure a wide range of motion, and rest, which the startup believes can act as key indicators of canine health.

The gadget also includes both WiFi and Bluetooth capability, allowing it not only to record location-based activity data, but transmit that information to Whistle’s dashboard, which owners can access via the startup’s smartphone apps or via the Web. The device’s location sensing capability is fairly broad, but Whistle co-founder Steve Eidelman (Disclosure at the end of the post) tells us that it can pick up on whether your dog is at home, or, say, riding in the car with you, based on which network it’s accessing (Bluetooth or WiFi). And, by the way, health and activity tracking entrepreneurs, if a pet company can do auto, remote Bluetooth-powered data sync, so can you. Don’t launch without it, you’re insulting your users.

Like the better examples among the Fitbits, Basis(es), FuelBands and Ups of the world, the real key to Whistle’s concept is not its device or apps, but its cloud platform and the data crunching it’s doing behind the scenes. Eidelman tells me that the company has been working with a lot of the biggest pet companies, veterinary clinics and so on to aggregate dog health data and break it down into categories. The more data it collects, the more the startup can build an accurate picture of health patterns and where your dog should ideally fall on that map based on its age, breed, weight and activity. 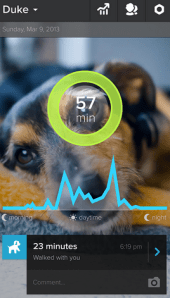 As it pulls in activity data in realtime, Whistle then weighs those indicators against its dataset (and “doggie demographic information,” as I’m calling it) to see just how well Fido is, or isn’t doing. And, really, dogs could care less about how many miles they log each day chasing cars, it’s really about the owner. If we assume the average dog owner wants to treat their pet well, then Whistle provides them with the benchmarks from which they can glean their success rate. Activity levels looking pretty low? That’s on you, pal, not your dog.

Plus, dogs generally have to be in a lot of pain if they’re going to outwardly show it. Generally, they’re going to suffer silently. (See? You just unconsciously bought into Whistle at the thought of a sad, whimpering dog, didn’t you?) With the ability to track your dog’s general activity and health levels in realtime, there’s a better chance that you will be able to identify problems before they get out of hand — or so the thinking goes.

And, if you’re willing to go with it, the real genius here is that, because Whistle is really playing into the motivations of the dog owner (not Fido himself), if they can convince you to buy their health tracker, they can then up-sell you on a string of other dog-focused products and services. Since Whistle is just launching today, they haven’t gotten there yet, but plans are in the works. Eidelman wouldn’t say what they’re working on next, but it is clear that the startup intends to become a brand (with a line of products), rather than simply holding fast to the “Fitbit for pooches” space. 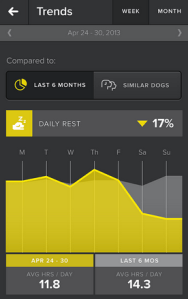 Unlike, say, Amazon which sells hardware at a loss to get you using its other services, at the outset, Whistle is giving its apps, analytics and cloud service for free to get you to buy its hardware. The gadget will run you $99, which although it may seem like a lot, really isn’t for avid pet owners who will spend ten times that in a couple of weeks. Whistle is taking the same approach as RunKeeper (or Runtastic) in that it wants to build a platform and eventually stake a claim to the “pet graph.” Though my eyes just involuntarily rolled, this means that as more of these devices pop up, if Whistle can be the data platform which they all connect to, it would potentially be holding the keys to the kingdom.

But that’s getting a little ahead of the tail. While companies can always generate a little revenue from selling to really passionate, committed audience on their own site, the key for companies like Whistle is retail. More specifically, retail partnerships. Considering people spend $50+ billion on pets every year, somewhat surprisingly, a small group of pet franchises own most of the marketshare in the industry.

Recent market reports from IBIS show that “more than half (63.8 percent) of the pet store industry’s revenue comes from two specialty supply retailers: PetSmart and PETCO,” with the long-tail consisting of small franchises and family owned stores, for example. PetSmart and PETCO both have about 1,200 stores in the U.S.

The other opportunity going forward, co-founders Steve Eidelman and Ben Jacobs tell us, is in ramping up its relationships with vets. Companion animal ownerships in the U.S. jumped from 62 percent to 68 percent, as pet ownership has been shown to reduce stress and tends to increase in tough economic times. Hey, people need something to cheer them up. The American Veterinary Medical Association found that dogs are more likely to be taken to the vet than cats.

Just as M.D.s are for their human owners, veterinarians are increasingly enrolling their patients in wellness plans and programs, as total patient enrollment rose to 22 percent (from 14 percent the prior quarter). There’s not a huge amount of competition in the “Fitbit for dogs” space, so the more Whistle can get its products in front of vets, the more likely they are to become lead-generators for the startup’s products.

For Whistle to become a viable company, getting its products into PetSmart, Petco or the equivalent (and building these relationships with vets) will be critical. If they can do that, and even perhaps capture an entire aisle, they’ll be rolling in dog treats.

[Disclaimer: Though all of my posts should be taken with a grain of salt, for sake of full disclosure, I should say that I have known Steve Eidelman for several years and consider him a friend. While I have no personal financial stake in Whistle, I do admit a bias insofar as I hope they achieve fame and glory, alhough, admittedly, this can be said for the majority of startups I cover.