Editor’s note: Peter Levine is a partner at Andreessen Horowitz. He has been a lecturer at both MIT and Stanford business schools and was the former CEO of XenSource, which was acquired by Citrix in 2007. Prior to XenSource, Peter was EVP of Strategic and Platform Operations at Veritas Software, where he helped grow the organization from no revenue to more than $1.5 billion, and from 20 employees to over 6,000. Follow him on his blog and on Twitter @Peter_Levine.

Open source software powers the world’s technology. In the past decade, there has been an inexorable adoption of open source in most aspects of computing. Without open source, Facebook, Google, Amazon, and nearly every other modern technology company would not exist. Thanks to an amazing community of innovative, top-notch programmers, open source has become the foundation of cloud computing, software-as-a-service, next generation databases, mobile devices, the consumer internet, and even Bitcoin.

It Started (And Ended) With Red Hat

Red Hat, the Linux operating system company, pioneered the original open source business model. Red Hat gives away open source software for free but charges a support fee to those customers who rely on Red Hat for maintenance, support, and installation. As revenue began to roll into Red Hat, a race began among startups to develop an open source offering for each proprietary software counterpart and then wrap a Red Hat-style service offering around it. Companies such as MySQL, XenSource, SugarCRM, Ubuntu, and Revolution Analytics were born in this rush toward open source.

Red Hat is a fantastic company, and a pioneer in successfully commercializing open source. However, beyond Red Hat the effort has largely been a failure from a business standpoint. Consider that the “support” model has been around for 20 years, and other than Red Hat there are no other public standalone companies that have been able to offer an alternative to their proprietary counterpart. When you compare the market cap and revenue of Red Hat to Microsoft or Amazon or Oracle, even Red Hat starts to look like a lukewarm success. The overwhelming success of Linux is disproportionate to the performance of Red Hat. Great for open source, a little disappointing for Red Hat. 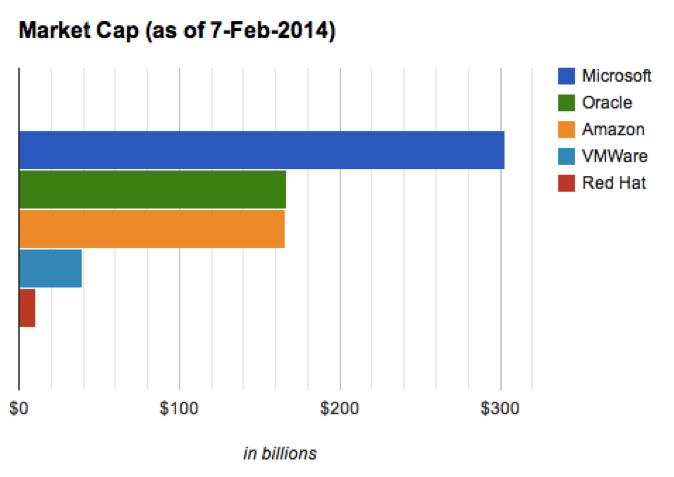 There are many reasons why the Red Hat model doesn’t work, but its key point of failure is that the business model simply does not enable adequate funding of ongoing investments. The consequence of the model is minimal product differentiation resulting in limited pricing power and corresponding lack of revenue. As shown below, the open source support model generates a fraction of the revenue of other licensing models. For that reason it’s nearly impossible to properly invest in product development, support, or sales the way that companies like Microsoft or Oracle or Amazon can. 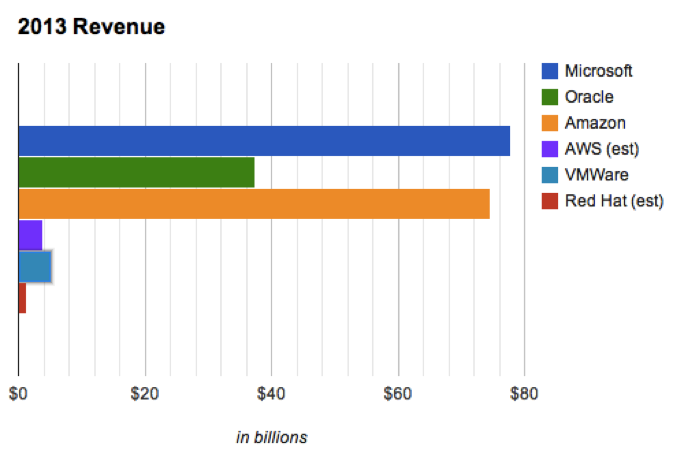 And if that weren’t tough enough, pure open source companies have other factors stacked against them. Product roadmaps and requirements are often left to a distributed group of developers. Unless a company employs a majority of the inventors of a particular open source project, there is a high likelihood that the project never gains traction or another company decides to create a fork of the technology. The complexities of defining and controlling a stable roadmap versus innovating quickly enough to prevent a fork is vicious and complex for small organizations.

To make matters worse, the more successful an open source project, the more large companies want to co-opt the code base. I experienced this first-hand as CEO at XenSource, where every major software and hardware company leveraged our code base with nearly zero revenue coming back to us. We had made the product so easy to use and so important, that we had out-engineered ourselves. Great for the open source community, not so great for us.

If you think this is past history and not relevant, I see a similar situation occurring today with OpenStack, and it is likely happening with many other successful open source projects. As an open source company, you are not only competing with proprietary incumbents, you are competing with the open source community itself. It’s a veritable shit-show.

If you’re lucky and have a super-successful open source project, maybe a large company will pay you a few bucks for one-time support, or ask you to build a “shim” or a “foo” or a “bar.” If you are really lucky (as we were with XenSource), you might be acquired as a “strategic” acquisition. But, most open source companies don’t have that kind of luck, and the chances of going public and creating a large standalone company are pretty darn slim.

Even with all that stacked against them, we still see entrepreneurs pitching their companies as the “next Red Hat of…” Here is the problem with that vision: there has never been a “next Red Hat of…” It’s not to say we won’t see another Red Hat, but the odds are long and the path is littered with the corpses of companies that have tried the support model.

But there is a model that works.

Selling Open Source As A Service

The winning open source model turns open source 1.0 on its head. By packaging open source into a service (as in cloud computing or software-as-a-service) or as a software or hardware appliance, companies can monetize open source with a far more robust and flexible model, encouraging innovation, and on-going investment in software development.

Many of today’s most successful new companies rely on an ecosystem of standardized open source components that are generally re-used and updated by the industry at-large. Companies who use these open source building blocks are more than happy to contribute to their ongoing success. These open source building blocks are the foundation of all modern cloud and SaaS offerings, and they are being monetized beautifully in many cases.

Depending on the company and the product, an organization may develop more open source software specific to their business or build some amount of proprietary software to complete the product offering. Amazon, Facebook, GitHub and scores of others mix open source components with their own proprietary code, and then sell the combination as a service.

This recipe – combining open source with a service or appliance model – is producing staggering results across the software landscape. Cloud and SaaS adoption is accelerating at an order of magnitude faster than on-premise deployments, and open source has been the enabler of this transformation.

Beyond SaaS, I would expect there to be future models for Open Source monetization, which is great for the industry.

So what are you waiting for?

Build a big business on top of and around a successful platform by adding something of your own that is both substantial and differentiated. Take, for example, our national road and highway system. If you view it as the transportation platform, you start to see the host of highly differentiated businesses that have been built on top of it, ranging from FedEx to Tesla. The ridesharing service Lyft is building its business on top of that same transportation platform, as well as Amazon’s AWS platform.

If you extend that platform worldview, Red Hat’s support model amounts to selling a slightly better version of the road – in this case, the Linux operating system – which is already good enough for most people.

Sure, when you first launch a business built using open source components, it’s important to grow the size of the platform and cater to your early adopters to drive initial success. So you might start off looking a little like Red Hat. But if all goes well, you’ll start to more resemble Facebook, GitHub, Amazon or Cumulus Networks as you layer in your own special something on top of the platform and deliver it as a service, or package it as an appliance. Becoming the next Red Hat is an admirable goal, but when you look at the trends today, maybe even Red Hat should think about becoming the next Amazon.