Some Flickr users noticed the company’s “About” page was upside-down yesterday. Yes, literally upside-down. And yes, we checked, it wasn’t just us. As it turns out, yes, Flickr’s upside-downness was on purpose. Yahoo confirmed to us today that the “mistake” was actually an easter egg meant to celebrate Australia Day (Jan. 26).

“We changed our About page for Australia day (hence the upside-down) and replaced the team photos with all things Australia – for example photos of kangaroos,” a company spokesperson noted.

But the page had another cool trick, too – it was also a job ad. Nosy developers who checked the source code saw a special “we are hiring” code, says Yahoo: 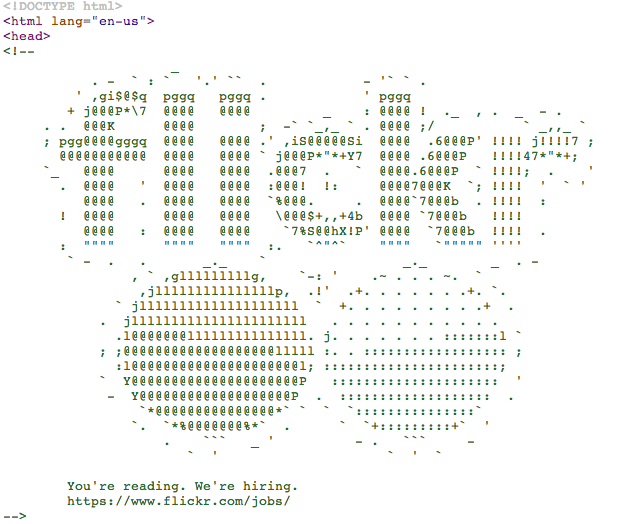 The message was simple: “You’re reading. We’re hiring,” followed by a link to the Flickr jobs page.

Quipped one reader on Hacker News about the ad:

“Something more esoteric would be more interesting..maybe a small but prominent Pi in the lower right hand corner that when clicked causes 3D CSS transforms to be applied that give the illusion of the web page as a gate opening up onto a job search site.”

Zing, came a reply, “Someone has watched one too many Sandra Bullock movies.” (This one perhaps?)

We asked Yahoo how well the stunt performed in terms of referrals, but the company declined to say. According to Twitter, only a handful of users even noticed the change, it seems – which may speak more broadly to Flickr’s current “coolness” factor than the company may have liked to share.

Flickr’s about page is…. is upside down. Why? http://t.co/LukxKMGLya

Flickr’s ingenious upside down about page “were hiring” ad (figure it out): http://t.co/uqRteeiT7h @Flickr #code #webdevelopment