Users of flagship smartphones such as Apple’s iPhone 5s and Samsung’s Galaxy S4 are continuing to suck down more data than their tablet-wielding counterparts, according to a large-scale survey of mobile data consumption in 2013 conducted by JDSU (which last year bought mobile data analytics company Arieso, the company that previously ran the annual survey).

But the most data thirsty phone users of all have an iPhone 5s burning a hole in their pocket.

As with the 2012 study, the 2013 survey examined the data demands of more than one million subscribers using more than 150 different devices over a single, 24-hour weekday in a Tier-1 European market, which had a mixture of urban and suburban morphologies. But for the first time the survey also studied a developing market for comparative purposes — with a further one million+ subscribers studied in this market over the same 24-hour period.

To ensure statistical validity the study only looked at the data demands of popular devices — i.e. those represented by at least 1,000 subscribers (conversely, the most popular devices had subscriber rates of well over 10,000 apiece).

The results are pretty telling about the habits of flagship smartphone owners, if not entirely surprising. You guys are a data-demanding bunch. Especially if you happen to own the latest iPhone.

Continuing the trend of the past three years’ findings, the 2013 study found that mobile subscribers using Apple’s flagship smartphone are the most data-hungry smartphone users of all. And they’re getting hungrier still: users of the new iPhone 5s are even more data-hungry than previous top-of-the-line iPhone owners — with the study describing them as the most voracious smartphone users it’s yet seen, with “unprecedented increases in uplink and downlink data demands”.

According to the findings, iPhone 5s users demand 7x as much data as iPhone 3G users in developed markets (the study uses the iPhone 3G as its mid-range benchmark device), and 20x as much data in developing markets.

The most data-demanding device in 2013 was the iPhone 5 — but iPhone 5s users are demanding a fifth (20%) more data than iPhone 5 users in developed markets, and 50% more data in developing markets.

Owners of Apple’s current flagship phone also have a greater data consumption than the Android-based Samsung Galaxy S4, which had a 5x data generation rate vs the iPhone 3G in developed markets and 11x in developing markets.

The SGS4 did rank a lot higher for uplink data generation — coming third in developed markets (vs sixth place for the iPhone 5s). The study goes on to note that the average user of the SGS4 generates almost as much uplink data as eleven iPhone 3G users in the developing market it analysed.

The SGS4’s “prolific” uplink data generation usage is described as “consistent with the improved high-resolution 13-megapixel primary camera and the 2-megapixel front-facing camera”. (The iPhone 5s has an 8MP rear camera.)

Both Apple and Samsung are amply represented in the top data gobbling devices across developed and developing markets, as the below tables from the report show: 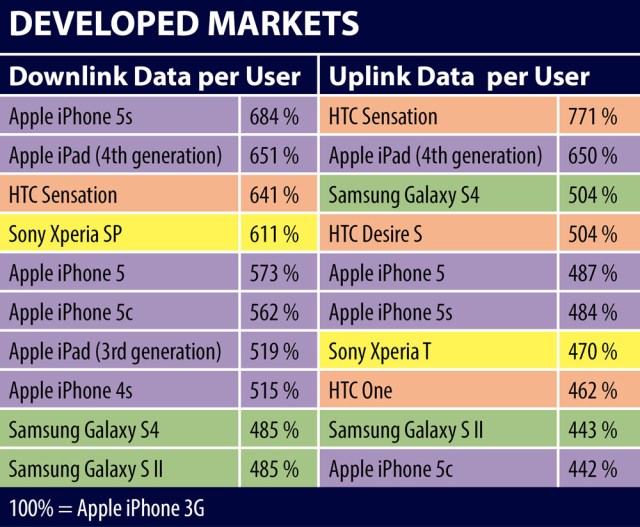 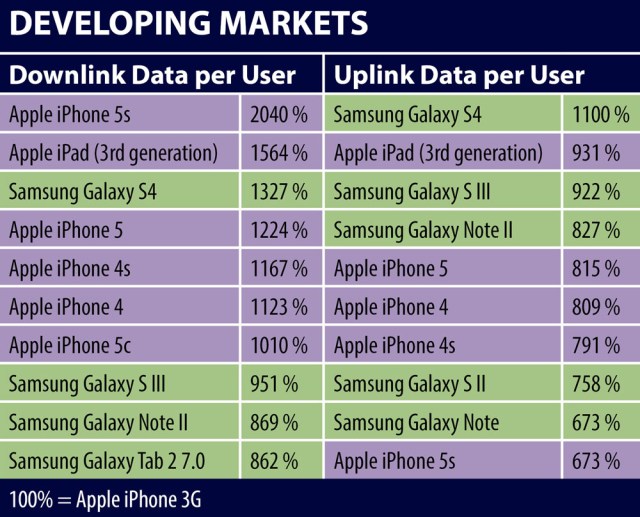 The report also flags up the relatively reduced amount of data consumption by users of the lower cost iPhone 5c compared to previously released iPhones. “This is consistent with the marketing of the device relative to the new flagship iPhone 5s,” the report notes.

Bottom line: even though the iPhone 5c is a shiny new iPhone, it’s not a flagship iPhone so the owners of this device have more modest data consumption habits (on average).

On the tablet front, Apple’s fourth-gen iPad has replaced the Samsung Galaxy Tab 2 10.1 in the top tablet spot in the studied developed market (relative to 2012’s study). No sign of the iPad Air as yet, but it’s a little too early for that device to crop up on the analysed networks (being as it went on sale in November, when the data was being gathered).

The study also points out that — as with the don’t-call-it-cheap-but-it’s-not-a-flagship iPhone 5c — Apple’s lower priced tablet, the iPad mini, yields lower data consumption rates than its flagship tablet models. The report notes that iPad mini users consume only 80% of the downlink data consumed by 2nd and 3rd generations of iPads.

“Similar to the iPhone 5c, the iPad mini was not intended to be a flagship device and instead has sought to occupy a niche position in the market,” it adds.

Another characteristic of mobile data consumption detailed by the study applies to the hungriest 1% of all subscribers. The report notes that these users consume more than half of the downlink data volume — which it describes as “broadly consistent” with the trends reported over the past two years in developed markets.

However the device-types these hungriest of data-hungry mobile users are conducting their bandwidth hogging activities on has seen a bit of a shift. The report notes that in the developed market being analysed, smartphones now constitute the majority of “extreme devices”, taking a 63% fraction vs 40% in 2012’s study. While tablet device usage among this group has experienced the largest relative decline, dropping from 6% in 2012 to 2% in 2013.

It’s possible this is a consequence of smartphones getting bigger and thus more tablet-esque — aka the rise of the phablet — allowing extreme users to choose a compromise device that’s quasi-pocketable (compared to a full-fat tablet), and thus able to appeal to their desire to remain tethered at all times to the Internets, while still being large enough to eyeball most of the stuff they want to on the go.

There’s no doubt phablet usage is on the up — earlier this week analyst Juniper Research forecast that 120 million palm-stretching phablet units are expected to ship annually by 2018, up from an estimated 20 million in 2013. And with some signs that tablet sales might be softening, it seems logical to connect the swelling waistlines of the average smartphone as a contributory factor in swelling rates of data consumption among phone users.

Bigger smartphones, after all, often more screen real-estate for performing data-consuming activities. And, unlike tablets, these gizmos are merely a handy pocket away from users’ fingertips.

The report also touches on the role being played by LTE/4G in encouraging data-gobbling — noting that the higher speeds supporting by this next-gen cellular tech are doing the equivalent of pouring lighter fuel on the data consumption bonfire.

In other words, throw LTE into the mix along with powerful, fatty phablets and increasing levels of mobile data gluttony is a given. It’s almost enough to make you pity the poor carriers whose networks have to shoulder the burden of “extreme users” and data-diva flagship owners.

“The faster the speeds that mobile operators provide, the more consumers swallow it up and demand more,” concludes report author Dr Michael Flanagan.

“One would expect a honeymoon period in which early adopters test their toys. But for 4G users to consistently exhibit behaviour 10 times more extreme than 3G users well after launch constitutes a seismic shift in the data landscape.”