Smartphones including the iPhone 5, Samsung Galaxy SIII and HTC Sensation XL are consistently consuming more mobile data than tablets, according to a new report by mobile data analytics company Arieso. It’s the third such annual report the company has compiled — gathering data via its own network monitoring technology.  The firm looked at the data demands of more than one million distinct subscribers over a single, 24-hour weekday in November 2012, gathering data on 125 different devices in total (it only includes devices with more than 1,000 subscribers each to ensure statistical validity). The data was taken from a tier-1 UMTS network in Europe (so does not factor in LTE/4G usage as yet).

Out of the top 10 most data hungry devices (excluding dongles) six were smartphones, three were tablets and one was a ‘phablet‘ (aka larger sized smartphone) — while tablet users placed 4th, 8th and 9th.

“It seems the capabilities of the newest smartphones – not tablets – are unleashing even greater user demand,” said study author and Arieso CTO, Dr. Michael Flanagan, in a statement. “Once you move away from raw consumption statistics, the most remarkable finding is the way in which people use smartphones and tablets. Regardless of device type and operating system, there is very little variation in the usage ‘signature’ between smartphone users and between tablet users.”

According to the data, iPhone 5 users are especially voracious when it comes to mobile data — accounting for more than four times the uplink and downlink data of iPhone 3G users. But while Apple’s smartphones have always accounted for high levels of mobile data consumption, Arieso notes that for the first time devices flagship devices from three manufacturers (Apple, HTC, Samsung) consumed more data per user than tablet devices.

Owners of the Samsung Galaxy SIII were responsible for generating (uploading) the most data of all analysed smartphones and tablets, closely followed by the phablet Galaxy Note 2: 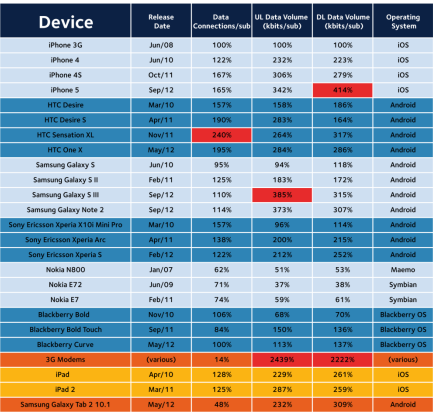 The study notes that “the blurring of smartphone and tablet functionality” is helping to fuel mobile data use, along with “new data-intense features” — such as larger high resolution displays, more powerful mobile chipsets and 4G/LTE support. A mitigating factor for mobile data consumption on tablets is of course Wi-Fi — with Arieso noting that tablets are used “relatively” consistently in Wi-Fi rather than cellular coverage areas.

“It is remarkable that users of the flagship smartphone devices from Apple, HTC and Samsung are seen to consume more data than the tablet users under study in Table 1 [above]. This is the first time that this dominance has been seen so consistently across manufacturers and reflects two trends: the inexorable increases of data consumption in smartphone devices and the relatively consistent use of tablets in WiFi (rather than cellular) coverage areas,” the report notes.

“Recent smartphone launches continue to reveal new breeds of data subscribers with increasingly voracious appetites, in part fuelled by the blurring of smartphone and tablet functionality. The demands of prior smartphone subscribers are formidable and well known in the industry, especially with regards to iPhone 3G data volumes and numbers of data calls. However, the introduction of new data-intense features on recent smartphones (such as the A6 chipset, larger Retina display and LTE support on the iPhone 5) raises the expectation that the users of these new smartphones will be even more intense data consumers,” it adds.

Arieso notes that the tablet market is also more complex than in past years it has tracked the market, with more tablets under consideration than ever before: last year’s report only included iPads in the tablet category, this year’s report includes the Samsung Galaxy Tab 2 10.1.

The report also notes that the amount of mobile data being uploaded is increasing, with one uplink byte of data generated for every six downlink bytes — which Arieso says is a 17 per cent increase over the relative amount of uplink data seen last year (when the ratio was 1:7).  “This trend is consistent with increasing amounts of social networking (especially photo and video uploading) as well as cloud synchronization,” the report says.

The hungriest one per cent of all subscribers analysed consume 40 per cent of the downlink data — a drop from last year’s report when it stood at a full half. Arieso notes that — beyond market variations, as this is a different market to the one studied last year — the “relatively recent” launch of LTE in this year’s studied market “means that many data-hungry dongle users have already made the move away from UMTS”.

The hungriest one per cent of all subscribers were predominantly using USB dongles or 3G Modems: accounting for 54 per cent of the one per cent, with smartphones taking 40 per cent and tablets just six per cent. Arieso also notes that even the smartphone and tablet users in this data-loving segment are “often seen” to make use of the network from a “small number of discrete locations”.

The company also compared normalized data download consumption of smartphones, phablets and tablets — with the resulting graph indicating little variation in the use of same-category devices from different manufacturers, such as the iPad and Galaxy Tab 2 10.1, and the iPhone 5 and Galaxy SIII. While, looking at the Galaxy Note 2 — a so-called phablet device — the report notes that the device appears to be being used more like a smartphone than a tablet, although “at high percentiles” its users are exhibiting more “tablet-like behaviours”: 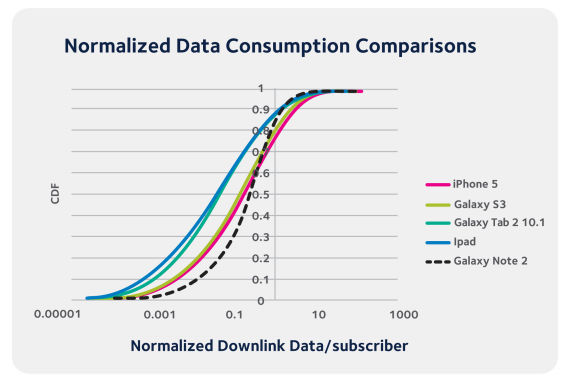