Google today announced its smart contact lens project, but it’s not the first by a long shot (or even a moon shot). Other companies have long been working on smart lenses — including Microsoft Research, which unveiled a similar project in 2011 in collaboration with someone who now works for Google X.

Babak Parviz used to be a professor at the University of Washington, where he collaborated with Microsoft Research. He was of the first to work on smart contact lenses. Today, he is at Google and working on Google Glass and the smart lens project.

But as is often the case with Microsoft Research projects, it doesn’t look like the project ever went anywhere.

Here is the video Microsoft made back in 2011 to showcase this project:

It’s also worth noting that there are already some smart contact lenses on the market today. They don’t measure glucose, but the Sensimed Triggerfish, for example, is a disposable contact lens that uses a sensor to measure changes to the eye in order to personalize treatment for glaucoma patients. This technology has been available in Europe since 2010, but the company hasn’t received FDA approval to sell it in the U.S. yet. 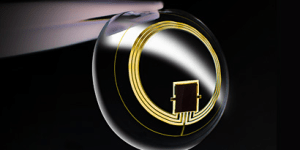 There is also a team at Sweden’s Malmo University that has developed a lens similar to Google’s and which uses a fuel cell that runs on tears. Other researchers in the U.S. and elsewhere have been working on similar projects, too.

This, of course, is the way science works. Different teams share and publish their ideas. Google wasn’t the first to wonder “if miniaturized electronics […] might be a way to crack the mystery of tear glucose and measure it with greater accuracy.” Others went to the moon before them.