Editor’s Note: This is a guest post by Spencer Chen (@spencerchen), head of marketing and growth at Frontback. Previously led market development for Mixpanel, Appcelerator, Huddle, and a bunch of old-school enterprise companies.

This past week Las Vegas played host to the annual CES conference and concurrently, the annual chiding of tech companies by tech press for their time-honored tradition of using booth babes in marketing their wares.

It’s a pretty indefensible practice. The hiring of young, college-aged females to dress as provocatively as possible to help promote…um, Ultra HD TV sets, Android tablets and Internet-enabled toothbrushes. It’s a relic of old enterprises, but that’s just the way they like their world. But what nearly every critic has failed to mention is a real concrete business reason to end the practice.

Well, I do: Booth babes do NOT convert.

How do I know? Well, I actually split-tested this a few years ago and the results were indisputable. If you have invested in a trade show to generate new business, using booth babes is a lead conversion boat anchor.

A couple of years ago I was at a large public software company in the product marketing group, heading up solutions we marketed to corporate IT and global systems integrators. Our average selling price (ASP) per deal was $80K. As a public company, we were hostage to quarterly earnings calls, and at the end of the day, every fiber of the company was about topline growth.

A few months out from attending a big SAP show, I was reviewing our staffing plans for our 10′ x 20′ booth. The preliminary plan was a sales rep, a systems engineer (sales guys that can actually demo), myself, and a couple of “marketing events consultants” (Protip: It’s frowned upon when you actually put “booth babes” as line item in your budget). 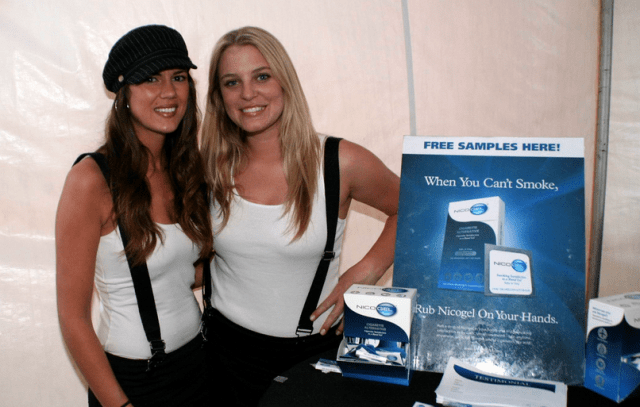 I was also looking at our previous year’s lead-gen efforts and it was a paltry 150 or so leads. For an event where we’re spending over $70K, it’s not great ROI. In the enterprise world, we would easily spend up to $200 to acquire a qualified lead.

After working through the nurturing funnel, the effective price to acquire a revenue generation opportunity for our reps can be as high as $1,000 (converting at 20 percent for lead to opp). The economics work because our ASP is $80K. But here I was looking at an ROI where my cost per lead was hovering near $500. Ouch.

Then came a godsend. I received an email from the event organizer that free booth space was being offered to us in a different part of the show floor since we had been a good marketing partner in the past. Bingo. There was my chance to test a theory with the hopes of boosting our lead-gen results.

My theory from years of being a part of trade show staffs is that the booth babes we hired were actually a drag on lead-gen. Up to that time, it was all empirical evidence based on being at shows where we had money to hire booth babes and events where we didn’t. I noticed that we had always done better without the booth babes but it was just silly to suggest that we did better because we didn’t have hot babes at the booth. I mean, I had a better chance of convincing my co-workers that the sky was purple.

But here was my chance to put it to the test. So for one booth I flew in professional booth babe talent, and for the other booth I had asked another local agency for a couple of show contractors that knew the local area and had established people skills. I actually had to stress a couple of times that I was not looking for contractors whose only attribute was “smokin’.” Upon arrival at the show, I get an email on my BlackBerry from the regional sales VP to call him ASAP because there’s obviously been a big “fuck up” in staffing. I gave him a call and he told me that there were two “grandmothers” hanging around our booth stating that they were a part of our team for the week.

Upon meeting my contractors, my sales VP was right. They weren’t just older than your typical booth babe, one was literally a grandmother. Shit, what have I done?? But it was too late now. After updating the sales team on our staffing strategy it was time for the big show.

The results? They were great. The booth that was staffed with the booth babes generated a third of the foot traffic (as measured by conversations or demos with our reps) and less than half the leads (as measured by a badge swipe or a completed contact form) while the other team had a consistently packed booth that ultimately generated over 550 leads, over triple from the previous year.

Everyone on the team was genuinely surprised by the results but duly convinced. It was like showing some hardened sales reps a new golf swing. I was able to replicate this a few more times throughout the year with even better results since we had a chance to further optimize our new “staffing plan.” 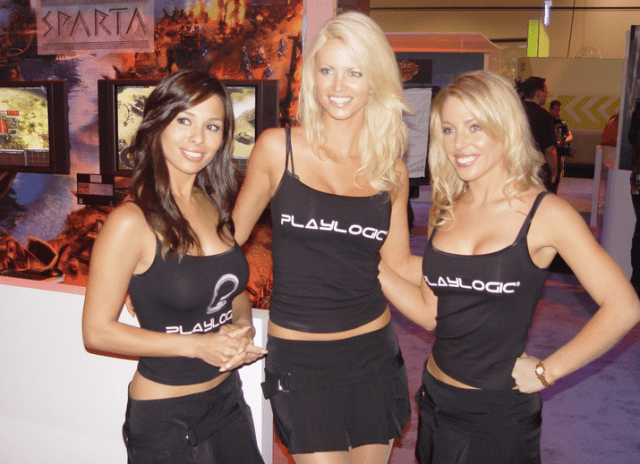 Here’s what I observed were the higher-performance drivers for when I chose to not use your typical booth babes for our events:

1. Booth babes are intimidating. Instead of drawing people in, booth babes actually give guys who attend tech conferences some anxiety and pause for engaging in conversation. Even booth babes themselves have said this. I think it’s just human nature for guys to be a little nervous around hot girls. The ones that had no trouble engaging our booth babes were always the overconfident weirdos.

2. Booth babes are lazy. These are the same gals that get hired to do restaurant shows, car shows, or events at the local hot spot. They are used to not doing much except showing up to make their fee for the day. At tech shows it’s quite a bit different where the audience is looking to learn and educate themselves on new offerings.

I mean, you don’t go to an SAP event to “turn up.” On more than one occasion I had to remind my booth babes to get out of the booth and bring people for us to talk to. I had no such trouble with my other team. They were more than happy to engage in small talk outside the booth, establish rapport, and make great local restaurant recommendations to our prospects before introducing them to one of our reps.

3. Business and product execs don’t talk to booth babes. If you’re a legit executive at a trade show, you already have an agenda to get some shit done. Afterall, that’s why we spend the money that we do to exhibit at these events…everyone that we would love to talk to is there. If you’re an exec, you’re looking for your peer at the booth and are not bothering with the booth babes. 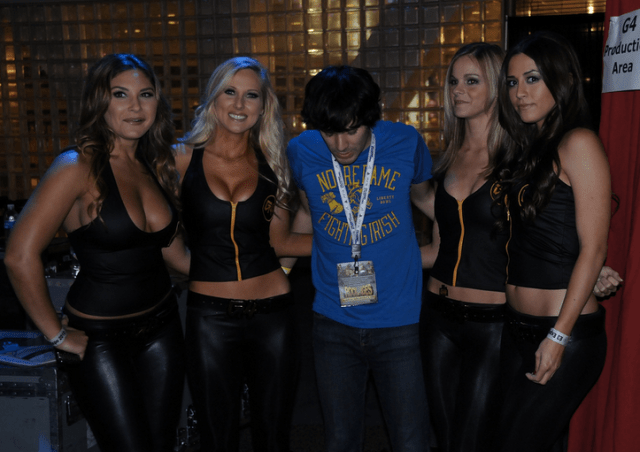 Many times I observed that while my team was busy in demos with other prospects, the booth babes were unable to hold the interest of these execs for the extra five minutes that I needed to get a person from our team to engage. I had no such trouble with the other ladies since I had requested that specific soft skill.

4. Low-quality leads. Back to point No. 1, the ones that the booth babes had no trouble attracting were often low-level, overconfident IT nubs — the guys that were already always first at the hosted bars and whose highlight for the quarter was being authorized to travel for the event. They had neither the authority nor the budget that made them ideal prospects for our sales teams. All these guys do is lower your conversion from lead to opp and lower your ROI on the show.

Needless to say, we were able to show our company a new approach to these big conferences and most importantly, I had met my lead quota and revenue contribution goals for the year :)

So, why do most technology companies still use booth babes? For a few reasons. First off, marketing departments in big companies are under-budgeted, under-staffed, and under-appreciated. Most of the marketing teams that I have worked with are predominantly women, but it’s frankly not the battle that they choose to fight when they are constantly simply fighting for more annual budget. 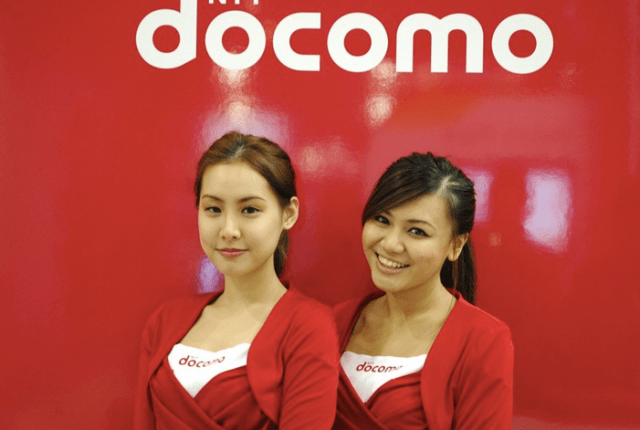 Secondly, related to marketing departments being under-budgeted, a marketing exec often would have to go to the sales exec for additional budget for these events. Once you do that, the marketing heads have to let the sales teams have a say in how these trade shows are run, and the sales guys love the booth babes (to be fair, the sales guys are the ones that have to stand in a booth for eight hours straight).

Lastly, there still exists the “stripper and steaks” mentality in sales, where it’s less about the product and more about relationships and the art of the “close.” Booth babes have long been a part of this dog-and-pony show in this old approach to sales. The new startup enterprise players are obviously changing much of this mindset where the product is the only thing that matters and sales people now facilitate the deal, not close it.

I am not here to participate in the bigger social debate on whether exploiting women as booth babes is bad for all of us in the long run…or if it’s simply wrong. I just wanted to state that if you were so inclined to take up this debate, I can offer you a sound business reason to support your opinion: Booth babes don’t convert.