For many weeks now, mobile users on both iOS and Android have been encountering a problem where visits to certain websites and apps have automatically redirected them to the platform’s app store to download various games. The issue involves errant ad networks, which should be blocking these shady ads, but aren’t. Meanwhile, mobile consumers simply trying to use an app or read an article are treated to a poor user experience.

The ads promote games like Candy Crush, Clash of Clans, Game of War, Zelda Dungeon, and other titles.

Affected sites and applications have included Imgur, the AP, NBC, Hearst properties, various newspaper sites and blogs, eBay, Perez Hilton, SomethingAwful, WeatherUnderground, TwitPic, Cheezburger.com, Slickdeals, Twitchy, NHL, and many others. This kind of issue has arisen in the past — many times unfortunately.

In Imgur’s case in particular, Reddit users have been complaining about the problem for at least two months now. Over a week ago, the company responded on the site, saying that it was trying to figure out which ad network was at fault, but it was hard to pin down.

These auto re-directing ads have been affecting both Android and iOS platforms, on both apps and websites, and come in through various third-party networks. The ads move around, too, making them even more difficult to track down and block. It’s unknown at this time which networks have been involved to date, but the “auto-clicking” ads could have a source that gets changed after the ad is first approved, which would make them hard to spot, it has been suggested.

In addition, networks sometimes buy inventory from other networks, blurring the line as to who’s responsible.

Hai @jephjacques , something might be up with last 2 ads – there’s a broken tag and they redirect to the App Store pic.twitter.com/Dr2sQwpENM

For some, like NBC, the solution was to block the entire mobile gaming category from its on-site advertising. The company confirmed to TechCrunch that its issue originated from remnant ad inventory controlled by Google, and it has now resolved the problem.

Meanwhile, Todd Haskell, CRO of Hearst Magazines Digital Media, said that his company works with Google’s AdX and AdSense platforms, as well as a handful of “other respected partners” who will address issues like these on Hearst’s behalf when they do occur. However, he stopped short of confirming the details surrounding the current incidents.

Reports, like this from Digiday, have suggested that the problem stems from the gaming companies, like King or Supercell, whose apps are being promoted. But more suspect are the ad networks themselves. Many of these companies have bad practices, and in the past, some on Android have even gone so far as to push co-installs (when you install one app, they install another) or hijack your default search engine. In fact, Google finally had to clamp down on that bad behavior last year. 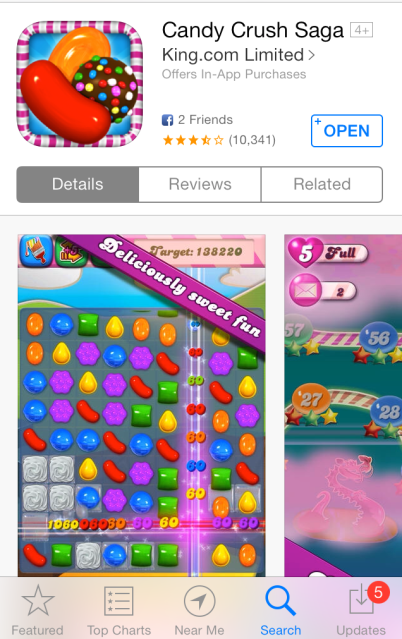 What’s more likely is that some networks have directly – or without knowing, because they buy from others – organized this in order to get better performance. Game makers like King and Supercell may not even be aware, because they buy so much media across multiple networks and affiliation platforms, explains Appsfire CEO Ouriel Ohayon, commenting on the issue.

King’s public comment supports this theory. The company told TechCrunch that it is aware that the problem is happening, but the redirects are not condoned, and the company actively does everything in its power to try and prevent them. And King is actually trying to determine the source of the redirects, too, a spokesperson explains.

“King’s contracts with suppliers explicitly state that this practice is not allowed when working with the company, and it will terminate contracts and no longer work with any suppliers found in breach of contract by creating these redirects. Where King can get exact links and examples of where these redirects are happening, it can try to track the supplier that is using these redirects. Any details given to help track down guilty parties are appreciated.”

An additional theory about the auto-clicking ads is that this problem is just a bug, but given the scale of the issue today, it looks like something beyond that.

The publishers running the ads are, to some extent, a victim of the problem as well – though it could be argued that they should be more vigilant over which networks they run ads from and how those ads behave.

Apple also has a responsibility, Ohayon notes, saying that they could randomly sample ads from various apps for quality and communicate regularly with networks, asking them to comply with certain rules and regulations. They could also fix it so that their Safari mobile browser would block automatic redirects. Of course, this would be a difficult undertaking on Apple’s part, but the way it stands today is that these kinds of redirects are ruining the user experience and consumers end up blaming the publisher, the promoted app, and the platform, like Apple or Google.

We know Apple is aware of the problem, but the company declined to provide a comment today. Google has not yet responded to our request for comment. Stay tuned.