Some local recommendation apps tell you where you can go to eat, dine or be entertained, as rated by things like proximity, price or user reviews. Others aim to offer a more personalized experience, helping you find places you would actually want to visit, based on your own personal interests. Zofari, a new company trying to build what’s best described as “a Pandora for places,” is in this latter group.

Weinstein came up with the idea for Zofari after spending some time traveling outside the U.S., with an unhelpful guidebook and a desire to find the kind of venues he would enjoy visiting. “If I have a place I love, can I use that to find other places that I love?,” he wondered to himself. That question lead to what later became Zofari.

The app, when it first launched earlier in the year, was more of a bare bones alpha project for one-off travel searches. During its initial testing period, the team realized that people had trouble understanding how the app worked, and what it was for. Weinstein, who had taught himself how to code to help create Zofari, admits that the backend wasn’t that good at the time.

In order to move forward, the team raised a small ($150K) friends and family round which allowed them to hire better engineering talent. It was a smart move, as the new app now has a more professional look and polish. 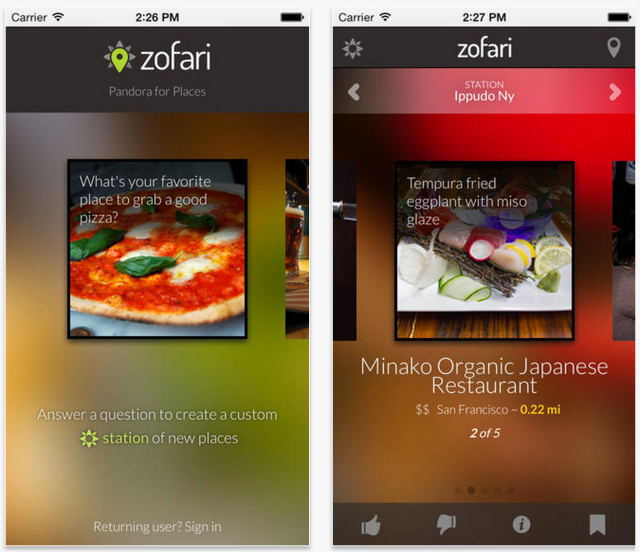 Today’s Zofari was built from the ground-up, but its core idea is still the same – that you could use a place you already like to kick off a list of suggestions of new places to try.

To make its recommendations and build out this so-called “city genome,” Zofari takes a combination of public data and data licensed from third-party sources, like Factual and Foursquare. Its algorithm looks for signals that would indicate similarities between places, like the neighborhood demographics, average rent, commercial density, what kind of other commercial establishments are present nearby (art galleries? dive bars?), and more, in addition to more traditional data like menu prices, for example.

The idea, explains Weinstein, is to try to determine what kind of “vibe” a place has. Is the place more bohemian or swanky? What other sort of intangibles can be determined through this kind of data analysis? 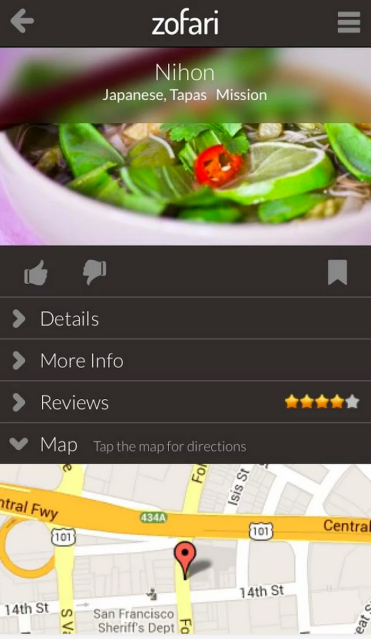 It’s still early days for the recommendation engine as these signals, and their impact on the place suggestions, are still being fine-tuned.

But one thing Zofari doesn’t take into account is social data – that is, what your friends like. Says Weinstein, your friends don’t necessarily share your same interests.

For end users, the experience of using Zofari is now more easily understandable, thanks to the Pandora analogy. To get started, you simply answer one of the suggested prompts like “What’s your favorite place to grab a good pizza?” or “Favorite place to take a date?” and Zofari spits back some other ideas for you to try. Depending on your location and specific tastes, you might find Zofari’s recommendations either a hit or miss.

Currently, the app has better coverage in major metro areas like New York, Chicago, D.C., Boston, San Francisco, and L.A., with more on the way. Meanwhile, a lightweight version of the experience is available to anyone across the U.S.

As you flip through your suggestions, you can give them a “thumbs up” or “thumbs down” to refine your place stations. There’s a heavier emphasis on places to eat in Zofari currently, as many of the default prompts are focused on dining and drinking, not entertainment venues. But Zofari is beginning to test pulling in music events, which are found on neighborhood detail pages. Here, it attempts to connect you with neighborhood recommendations for new cities, based on the neighborhoods you like where you live today. That’s something most recommendations apps don’t do. They’ll suggest a restaurant, but not a particular part of the city you may like to further explore.

Now a five-person team, the new Zofari mobile application debuted the new version just this past week. (iTunes/Android). The company is still largely bootstrapped, but will look into raising additional funding next year.