Square is announcing today that it has acquired New York-based photo-sharing app Viewfinder, or perhaps more accurately, that members of the Viewfinder team are joining the payments company, where they’ll work out of Square’s New York office. Two Viewfinder co-founders, Spencer Kimball and Peter Mattis, also former ex-Googlers, will now become senior members of Square’s East Coast team, along with the rest of Viewfinder’s staff.

Viewfinder was founded by Kimball, Mattis, and CEO Brian McGinnis, formerly of Lehman Brothers, and had under a dozen employees.

Two of Viewfinder’s founders, Kimball and Mattis, are known for creating GIMP in the 90s, says Square CTO Bob Lee in blog post today. He personally has known the founders for some time, having also crossed paths with them while they were working for Google in NYC, where they focused on infrastructure like Google Servlet Engine and Colossus, Google’s exascale distributed ﬁle system, he adds. 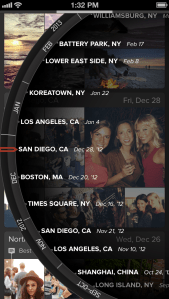 Given the team’s background, this deal appears to be one that’s more acqui-hire in nature, than one about the technology the team at Viewfinder had developed, which had involved a unique photo-sharing application which was part utility, part social network. The app was interesting for the technology under its hood, which was designed to allow users to search back through their photo history more efficiently, with a clever “jump scroll”-style interface.

Square says of Viewfinder that the team “is incredibly talented, having built an app that blends beautiful design and highly technical engineering to create personal, human experiences.” This, the company says, is what Square is also about, and the co-founders will now help Square continue to build its mobile applications.

Specifically, the former Viewfinder team will work on “seller initiatives” out of New York. Today, one of Square’s newer seller initiatives is Square Market, a way to shop online from local stores. This could potentially become a bigger business for Square in time. Today, the Market has a mobile/tablet-optimized look-and-feel, so it wouldn’t be surprising to see it get its own native app at some point, too.

In addition, while we’re hearing that though there was obvious interest in the founders themselves, as Square publicly notes, the deal was for the people at Viewfinder (ten total) as well as some of the company assets.

Square says it’s working to triple the size of its engineering team in New York over the course of 2014, so it’s likely that Viewfinder could be the first of several acquisitions still ahead.

As for the Viewfinder mobile application itself, it will remain up-and-running at least for the time being. However, no further updates will be released and no customer service will be provided.

Square declined to discuss the terms of the deal. Viewfinder had raised an undisclosed seed round of funding from private investors, which was north of $1 million.

We are thrilled to announce that the Viewfinder team is joining Square.

Over the years, we’ve had the privilege of working with some of the very talented folks who are now at Square. Square is already well known for its world-class engineering and design, but in recent months we’ve gotten to know much more about Square the company: its vision, its team, and most crucially, its engineering culture.

The reality behind the reputation is better yet. All of that talent is focused on the mission to make commerce easy — a big challenge and an even bigger opportunity. We love how Square keeps engineering novel solutions to problems people didn’t imagine could be fixed. Their products have already helped millions of local businesses, and the future is more exciting still. We knew Square was the place for us.

We’ve always been proud of our New York City roots, so it’s great to see Square’s contribution to fulfilling the city’s promise as a world capital for technology. We’re excited to help Square build out its NYC office. With its deep tradition in finance, a burgeoning tech scene, and more than 200,000 small businesses in just 300 square miles, the greatest city in the world is a perfect fit for Square.

As for Viewfinder, existing users will still be able to use the Viewfinder app for the time being, although we will no longer be releasing updates or providing customer support.

It’s been a joy to create Viewfinder. We are grateful to our investors, advisors, partners, and most importantly, our users. Your support and feedback made Viewfinder possible. And collectively through Viewfinder, we’ve captured countless memories, bringing us closer together with friends and family.

Thanks,
The Viewfinder team