Once in a while a game comes along that blends gameplay and aesthetic design to such a degree that it’s hard to tell where one ends and the other starts. It was true of Limbo, and it also describes exactly the experience of Monument Valley, a forthcoming iPad title from London design studio, ustwo, which uses the perception-bending drawings of Dutch graphic artist MC Escher as its conceptual jumping off point.

Monument Valley’s tricks of the eye don’t just toy with you aesthetically but serve as subtle keys to unlocking the puzzles that make up each scene and segment the game into chapters. These chapters are named for the isometric landscapes they depict, such as The Garden (pictured below) or The Water Palace. Or else they hint at the gestures required to slip the puzzle’s knots and progress to the next level (e.g. GripRotate, Draggers).

These architectural landscapes — they are the title’s eponymous monuments — consist of a jumble of passageways, towers, stairs and so on. These passageways don’t immediately appear to connect up, and the character you control, a small lost-looking girl called Ida, has to make the links between what’s real and unreal to journey from one end of the scene to the other — rotating portions of passageway to bridge gaps, for instance, or flipping a set of stairs to climb.

Portions of the landscape that can be rotated or moved are signposted by handles, colour changes or bumps resembling the connectors on Lego bricks. 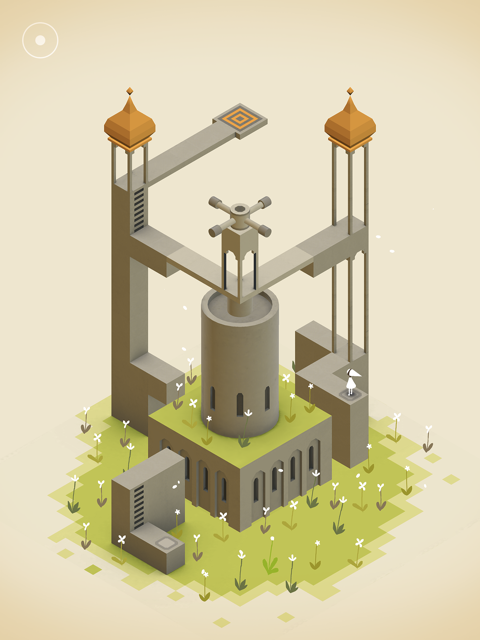 Normal rules absolutely don’t apply, with Ida able to press buttons allowing her to defy gravity and walk on a wall, or pass through one apparently disconnected tower door and appear out of another at the opposite side of the screen. Except when they do — Ida can’t just clamber anywhere she fancies; if there’s a wall, she needs a ladder to go up it. Or a gravity switch to flip her perspective.

The weird physics of the world is based on playing with spacial perception, allowing your eye to bridge gaps that could never be so traversed in reality. It’s a surreal and otherworldly experience, with a lonely protagonist who remains silent and leaves little trace as she progresses. The adversaries she encounters, called the Crow People, crop up as sporadic guardians of certain routes — marching up and down like automatons, allowing Ida to time her passage so she can slip by.

Monument Valley is due to arrive in Q1 next year but ustwo gave TechCrunch access to a preview of its latest build. I was testing the game on an iPhone 5 but it will be iPad-only at launch — and with the scenes often extending off the iPhone’s screen it’s easy to see why ustwo wants to make the most of the more generous screen real-estate offering by Apple’s tablets. That said, the studio confirmed to me that an iPhone version of the game is planned — although it will be iPad only at launch. Other mobile platforms are also factored into the roadmap, coming later.

“We’ve decided to go with the iPad as our leading platform as the screen real estate enables us to bring the fullest experience to the player. Every running river, every small crack in the architecture and Ida’s small movements feel enhanced on the bigger screen,” said ustwo’s Ken Wong, artist and designer of Monument Valley. 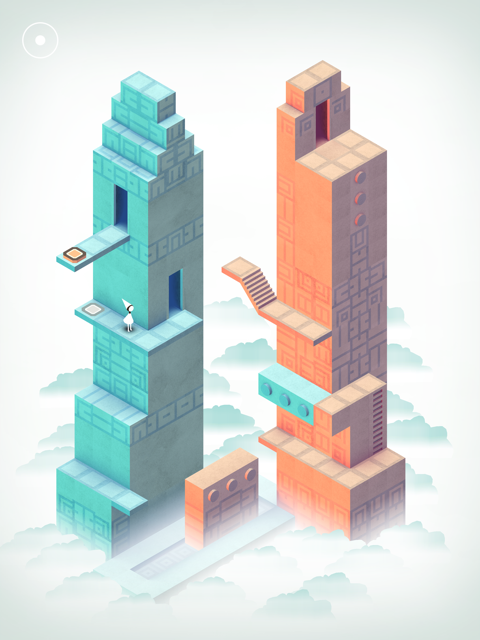 He describes the iPad mini  as a “really optimal gaming platform” — with enough room for game designers to showcase their work and for the player to interact properly with it, but small and portable enough for a mainstream audience to buy in.

“Every detail in the game is given the absolute perfect framing which was one of our goals from the outset,” he added. “We wanted every level in the game to be a piece of art that you could literally print out and frame and it seems that we’re on our way to achieving that because we’ve already done a couple of print runs internally for people.”

How challenging is it to translate visual perception tricks into viable game mechanics? Conceptually easy but technically challenging, according to Wong. “As soon as you start arranging cubes in an isometric perspective, your mind is filled with possibilities. Doing the technology that allows characters to walk across constantly shifting impossible structures is a bit trickier,” he said.

“It’s been really fascinating setting up the rules of this universe based on peoples’ perceptions of what they’re seeing from a singled viewpoint of a scene. Escher’s work wouldn’t be popular if it wasn’t also beautiful with great attention to detail, so we’ve also been working hard at making the game look really special.”

ustwo has a portfolio of thoughtful and creative apps to its name already — including the psychedelic game Whale Trail, antisocial photo-sharing app Rando and minimalist puzzle game Blip Blub, to name three. Monument Valley looks like it will take up the baton as ustwo’s flagship property when it launches next year. 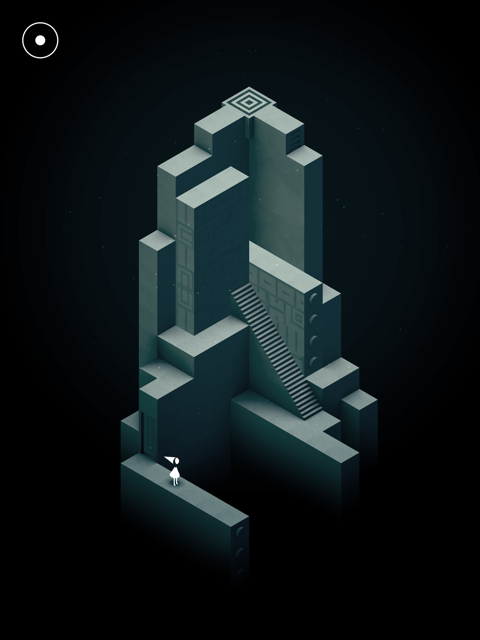 As well as Escher, Wong said the inspiration for Monument Valley came from art, architecture, and also the film Labyrinth.

“The work of M.C. Escher is great and popular because he found a way to describe geometric and spatial concepts through everyday elements like water, buildings and animals. I think what Monument Valley brings to the table is an exploration of how to bring an interactive, emotionally engaging experience to a wide audience through a set of simple mechanics and a world that feels at once familiar and fantastical,” Wong added.

Monument Valley will be a paid app, with a “premium” price-tag, owing to its focus on blending creative gameplay with high quality aesthetics. ustwo isn’t revealing how much it will charge as yet but says it has six people committed full time to the project, with a 12-month development span.  “We’re investing heavily into it’s production and will continue to do so post release,” he added.

Wong argues there is a “new wave” of premium apps hitting mobile devices, as developers seek ways to make their wares stand out from the freemium herd.  “In a sea of freemium powerhouses a few high quality premium experiences have popped up to disrupt the system and prove that there really is a market for players with absolute quality in mind. We’re aiming for Monument Valley to become the ‘coffee table book’ of iOS games – one you just have to show your friends,” he said.

To stay up-to-date about Monument Valley ahead of its Q1 2014 release you can sign up for updates here.