Late last week we published a piece about why Apple would want to build a factory to manufacture sapphire crystal, and why it might want to own over $570M worth of that production up front. Today, by connecting a few more dots, we can piece together how it could overcome the pricing and production volume barriers in order to use the material in smartphone screens.

Let’s start back in March of 2012, when a company called Twin Creeks came out of relative stealth to talk about a new production system it had created to manufacture photovoltaic (solar) cells that were cheaper and thinner, called Hyperion 3. The manufacturing process for most solar panels involves manufacturing a block of sapphire or other crystalline silicon and then slicing a .2mm-thick sheet off of it with a wafering saw.

Twin Creeks’ hydrogen ion particle accelerator (basically an ion cannon) allowed them to place wafers around the edges of the device and smash them with hydrogen ions. Here’s a description of the process from Extreme Tech:

A particle accelerator bombards these wafers with hydrogen ions, and with exacting control of the voltage of the accelerator, the hydrogen ions accumulate precisely 20 micrometers from the surface of each wafer. A robotic arm then transports the wafers to a furnace where the ions expand into hydrogen gas, which cause the 20-micrometer-thick layer to shear off.

The process, when applied to solar, is then followed up by backing the sheets with flexible metal. The result is a huge reduction in thickness of sheets without the use of saws. This results in a big reduction in costs.

Why do we care about a cool, but esoteric manufacturing process for solar panels? Well, jumping back to our piece from last week, you may recall that Apple is going in on a manufacturing deal with a company called GT Advanced Technologies. The deal will see Apple building a factory in which GT Advanced will make sapphire glass in high volumes.

The only problem with the high-volume production of sapphire for smartphone screens is that most analysts will tell you that it’s simply not cost-effective. A report in the MIT Technology Review early last year quotes analyst Eric Virey of research firm Yole Développement as saying that a sapphire display could cost around $30 or fall to around $20 in ‘a couple of years’. Gorilla Glass, by comparison, runs less than $3 for a typical screen. 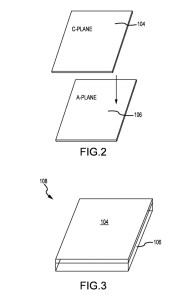 This is where it gets fun. See, GT Advanced actually made an acquisition late in 2012 of a company called Twin Creeks Technologies. Along with that acquisition, GT Advanced got a bunch of patents and equipment, including its Hyperion ion implanter (pictured above). Though the ion cannon was primarily used for semiconductor substrates and solar wafers, GT Advanced noted another use in its release.

“In addition, GT expects to pursue the development of thin sapphire laminates for use in applications such as cover and touch screen devices,” the release reads (emphasis ours). “The Hyperion ion implanter has the potential to minimize, or in some cases eliminate, the need for wafering saws, which would significantly lower the cost of production.”

So, the Hyperion tech should enable GT Advanced to significantly lower the costs associated with building sapphire screens for smartphones. But super thin wafers made cost-effective is only half of the puzzle. The other half is a lamination process, where sapphire is mated to another sheet of material.

This brings us to a few months ago, when Apple filed a patent called ‘sapphire laminates’, in which it discusses a variety of ways to laminate sapphire sheets together with other sapphire sheets or with glass. There are a variety of abstractions, but the key is a method which mates two separate sheets together to create one ‘piece’. The key claim we’re looking at here is “a glass assembly comprising: a glass sheet; and a sapphire sheet adhered to the glass sheet, wherein the assembly is less than or approximately equal to 1 mm thick.”

This claim outlines a process where a glass sheet could be produced and mated with a sapphire sheet to create a screen (another claim describes a ‘sandwich process’ as well, with two sapphire sheets). Why a screen with glass underneath and sapphire on top?

Because glass is much, much cheaper than sapphire and Apple has been using it to create in-cell touch panels. Another patent filed late in 2012 explains the process (via AppleInsider):

By integrating the layered structure of an LCD and a touch sensor, a variety of benefits can be achieved. This integration can include combining or interleaving the layered structures described above. Integration can further include eliminating redundant structures and/or finding dual purposes (e.g., one purpose for the touch function and another for the display function) for particular layers or structures. This can permit some layers to be eliminated, which can reduce cost and thickness of the touch screen LCD, as well as simplify manufacturing.

Basically, Apple will be melding the touch circuitry with the LCD display, creating a single, thinner part. This will obviously make the devices thinner and more cost-effective if the price of production is driven down. This works for both standard and in-plane-switching (IPS) panels, which Apple has taken to using lately. Unfortunately, there aren’t any commercial solutions for in-cell technology and sapphire crystal as of yet. 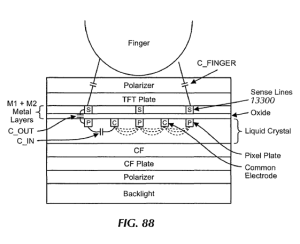 Instead, Apple’s patent outlines a method where it is possible to meld the hyper-thin sheets of sapphire created by GT Advanced with much, much cheaper glass sheets.

By doing this, Apple could drive the costs of sapphire sheets down incredibly low in comparison to the traditional method. It will be able to create many of these super thin sapphire sheets from the same amount of raw material it would take to make one full piece of sapphire cover glass. It could then laminate the assembly together in the way that it currently does iPhones (but does not do for iPads, even the new Airs).

By doing this, Apple could stretch out the production and cost factors of sapphire enough to support manufacturing full-size display cover sheets, not just small wearable panels, buttons or protective camera covers. This, in turn, could mean sapphire cover sheets that are harder and tougher than standard glass materials on your iPhone years sooner than most analysts have predicted.