Only a few months after its debut, mobile couponing app Clipless for Android has already been acquired by deal aggregator 8coupons, which had previously served as a data source within the app, along with other providers like Yelp, Groupon, Amazon Local, Foursquare, LivingSocial, and more. Clipless founder CEO Michael Barnathan, who was also acting as CTO of CoatChex (aka the Shark Tank startup which turned down Mark Cuban), is now leaving CoatChex to become 8coupons’ new “Head of Mobile.”

8coupons, for those unfamiliar, has to date delivered over 13 million deals across all verticals, including local, national, goods, and travel. It covers all local deals, including both “daily” deals and “everyday” deals like card-linked offers and zip-targeted offers from partners like Valpak and Money Mailer, among others. Today, its network of around 600,000 deals from over 500 sources are made available both on the web for consumers, as well as to developers through an API.

The company once offered an iOS application, too, but it has been pulled down from the iTunes App Store ahead of its makeover and relaunch. 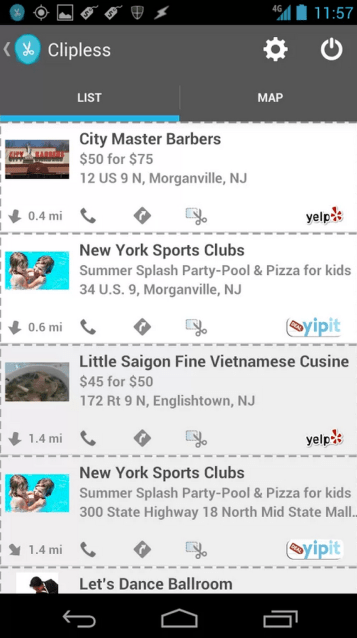 Following this acquisition, both the Clipless Android app and current 8coupons iOS applications will both be relaunching with a user interface makeover, designed to offer a better user experience, additional functionality, more intelligence, better content, and other improvements, we’re told.

That should be helpful to the 8coupons brand, which despite having pioneered location-based couponing (8coupons had, for example, partnered with Foursquare during its early days to power real-time deal alerts), has since been somewhat lacking the in-house talent needed to take on various competitors who have been transitioning their businesses to mobile.

Clipless, meanwhile, was interesting because of its ability to offer targeted, location-based deal alerts in real-time, and on mobile where those alerts are most practical. Broadly speaking, it competes with other shopping/deal finders like Shopular, Shop Alerts, Retail Me Not, Shopkick, and others. But as Barnathan explained at the time, many of these apps have been focused on malls and big box stores. They’ve been more like having mobile access to circulars, and less like having a personal assistant, he told TechCrunch in August.

At 8coupons, Barnathan will continue to focus on that same product vision at his new home, while helping the company build out its mobile engineering team further. (This could also mean there’s the potential for more startup acquisitions in the future.)

“The acquisition of Clipless was driven by its natural fit into 8coupons’ technology roadmap and we’re excited to have Michael join us in our mission to help people make the most out of their daily lives, by integrating the most advanced technology and data to give people what, when, where, and how they want it,” says 8coupons co-founder and CEO Landy Ung.

“Together with Clipless and Michael as Head of Mobile, we’re looking forward to accelerating our product development pipeline, designed to help 8coupons fulfill its mission since launching as a location-based platform for mobile deals on demand,” she adds.

From TechCrunch’s understanding, the deal was more about Barnathan’s talents than the Clipless app itself. The deal was some cash, but mostly stock at 8coupons’ valuation of $30 million. Stay tuned.