With mobile publishers moving away from paid apps and toward in-app purchases in order to monetize on mobile, there’s an increased need to generate more revenue out of existing install bases. That’s an area which mobile app engagement platform Appoxee has been focused on since its founding in early 2011, and today it’s announcing an additional $1.8 million in seed funding to help it continue its growth.

The round was led by U.S.-based hedge fund Lazarus Israel Opportunities Fund and Mosche Lichtman, who previously served as President of Microsoft’s R&D center in Israel, and is now joining Appoxee’s board. Existing investors including Cyhawk Ventures and Oryzn Capital also participated in the round, bringing Appoxee’s total funding to $2.4 million to date.

The additional investment is aimed at helping the startup, which has so far seen traction in its home base of Israel and elsewhere in Europe, take on the U.S. market. To that end, Appoxee plans on opening a San Francisco office by year-end. In the U.S., the company will have compete with a variety of companies like Urban Airship, Facebook acquisition Parse, and dozens of others.

Explains CEO Itay Levy, his product is differentiated from many operating in the space by the methods it uses to help app publishers create their campaigns. Appoxee primarily targets product managers and marketing managers – that is, the business side of app publishers. After signing up for the platform, instead of having to figure out how to use the system to meet their needs, Appoxee instead asks the customer about their goals. Then, working backwards from those goals, it helps the publisher build automated campaigns whose focus is on increasing retention and in-app purchases. 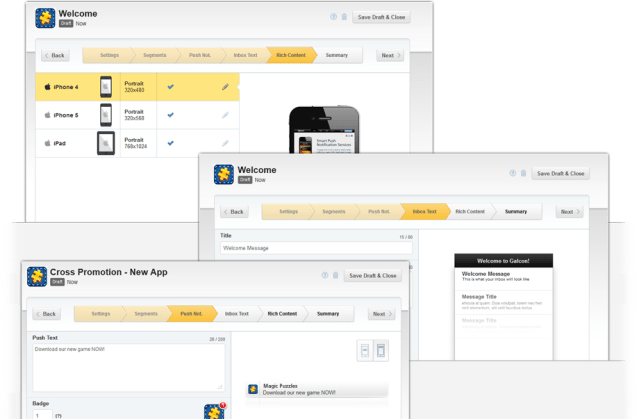 Says Levy, in some cases it will increase in-app purchases by 20%, but they’ve even seen others where they increased by 100%. The company now touts thousands of developers and apps using the platform, including names like Playtika, Social Point, Sygic, and Win.com, to name a few. In 2011, Appoxee was installed on 3 million end user devices, and by 2012 that number grew to 60 million, he tells us. Today, it’s at 275 million installs, and is sending over half a billion push notification messages per month.

While Levy declined to speak about revenue specifics, he would say that revenue is up by 800% since the beginning of the year and is still growing. The company today offers a free tier with unlimited push messaging up to 250,000 users, then launches into premium services beginning at $500/month.

The funding, in part, will go toward product enhancements, mainly those that will provide more automation in terms of the campaigns being run, as well as other optimizations. “We want to allow engagement and more automated. As a publisher, it will be very easy to create an effective campaign. Some of the things that we’re doing today can be automated,” Levy says.

Also in the works, Appoxee plans to grow its Tel Aviv-based team with hires on the engineering and product side, while looking for more sales and marketing hires in San Francisco. By next year, they hope to have doubled their 15-person team.