Curiator, a new app launching today at TechCrunch Disrupt SF, is not the first website that aims for people to discover and buy art, but it hopes its beautiful design, interactivity, and intelligent algorithms will mean that it will be the first to actually work.

As co-founder Moenen Erbuer sees it, the art world was one of the earliest industries to take advantage of the growth of the Internet; but as we have seen time and again in technology, sometimes being an early mover is not always the best position. “The online art world is stuck in 1995,” he says simply. Indeed, before I turned my attention to the world of technology, I worked for an art magazine, and I remember all too well the clunky websites full of too-heavy image files, glitchy marketplace joint ventures full of false purchases and dodgy work, and “galleries” of digital-specific art that too often bore little relation to beautiful work that you could see, if you could make a trip to a gallery in the flesh. It wasn’t pretty.

Co-founded by former Google engineer Tobias Boonstoppel and Erbuer — who himself comes from a background in design working at digital agency AKQA — Curiator is made with all the polish and savviness that you would expect from people who know both how the Internet works, and what makes people click with digital content.

Taking a page from Pinterest with its Masonry layout and dynamic grid, Curiator borrows in other ways from some of the later innovations in how many visually led e-commerce sites pick up information about new users: It initially takes the user through a page where it asks you to make a selection that you like from a page of options. Curiator then uses this to produce a wider selection of work that you may like, which becomes the basis of your collection. As with other social media services, you can follow other people’s collections, and others can follow you, or you can browse art by categories, specific names or through the whole river. 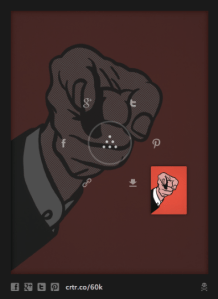 One of the most eye-catching parts of the site is its sharing tool. When you see a picture you like, you click on it and drag. Up comes a menu on the picture that lets you drop the image directly into your own collection; or to share it to Facebook, Google+, Twitter or Pinterest; or to download the image; or send it by email. It’s a nice way of making it very easy to move picture data around.

The social aspects, both with sharing work and also following people and being followed, is part of what sets Curiator apart from what it views as its closest competitor, Artsy, which Moenen describes as “having gone all-in on a recommendation engine and too focused on sales.”

For now, Curiator is focused mainly on getting more people on its site, uploading pictures, sharing them and adding them to their collections. This will help make the site not only richer for everyone to use, but will help Curiator pick up more data on what users want to have. This, in turn, will help Curiator with the next step in its development: adding a marketplace so that users can not only share artwork that they like to have in their “virtual” collections but also then use those “wishlists” — which may include museum pieces and other work that is not for sale — to generate lists of art that is there for the buying to become a part of users’ actual, offline lives.

The impetus for Curiator comes from two different areas. The first was Moenen and Boonstoppel’s own experiences, and those of their friends, in trying to collect art.

“A lot of people who have made a little money start buying art, but it’s an intimidating institution, going to galleries, fairs and auction houses. You see something you like, but don’t know if the price is right, or if it’s any good. If you’re not serious about art already, it’s hard to be confident about your own taste,” Moenen explained. He says that some people resort to hiring consultants, but that’s not to everyone’s taste. Others look to their friends to see what they buy. “So we decided, could we create a product that does both of those things, but for everyone?”

The other is that the two have dabbled in other projects before where people could send links to each other, which, when opened, created a way to let you track what that friend browsed via that link. This gave them ideas about how they could apply those learnings in a single site, even though none of that earlier code is being used in Curiator.

So far, in its limited beta, Curiator has seen some decent traction for the site, with a 17 percent retention rate, with many more people contributing work than they had anticipated. Users can either upload through the site, or use a Curiator bookmarklet to collect works from around the web.

There are no plans “ever” to add features like advertising to monetize the site, Moenen says. “We want the interface to be like a museum. When you start to put in ads, quality control is a challenge.”

Check out the video below, and also some questions from the judges:

Questions from the judges:

What kinds of sales do you plan to host on the site, when you launch them? Referral sales, getting a commission from sales from galleries, will be an opportunity. The other will be Curiator acting as a dealer or agent for artists. The third will be offering a platform for art owners to sell their own collections.

How do you deal with provenance and other kinds of authenticity questions on sales? We will cross that bridge when we come to it.

Is this aimed for total novices or experts? Ideally we want both using this.

Who do you see as your biggest competition, and how do you for example battle Pinterest? Amazon, Pinterest, Artsy are competitors. Pinterest is not specifically for art. And we have special ways of indexing users and artists.