But if you were to ask the next young, hip person you saw which social network they love most, odds are they’ll name Instagram.

But as Instagram grows, annoying behaviors sprout up like weeds. Beware, dear Instagrammers, these pitfalls that will make people hate you. (Or worse, unfollow you.) 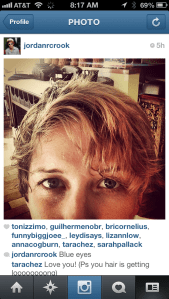 Let’s be clear: there’s absolutely nothing wrong with selfies.

The absolute worst type of selfie is the humblebrag selfie: the one when you’ve just finished working out, or just woken up, and your caption explicitly states how un-cute you are right now. If you’re not looking your best, why are you posting pictures of your face?

Again, I reiterate, there’s nothing wrong with selfies. In fact, your Instagram feed is equally flawed without any selfies. I follow you, dear friend, and want to look upon your lovely countenance. Just don’t overwhelm me with it. Keep me in the loop on your new haircut. Show off them pearly whites. Just don’t put all your eggs in the selfie basket. 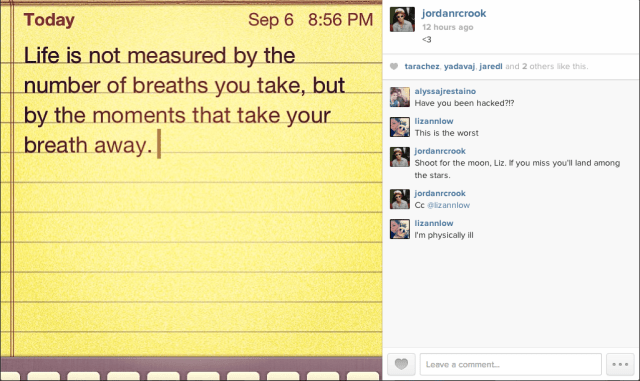 Not all screenshots are bad, only most of them. But by far the most egregious screenshots are filtered versions of inspirational quotes you’d find on Pinterest. We’ve all seen them before: “Shoot for the moon. Even if you miss, you’ll land among the stars.” Not only are these quotes shamefully overused, but most of them don’t even make sense. If you try to shoot yourself to the moon, and you miss, you’re essentially lost in space.

It’s also worth noting that Marylin Monroe didn’t actually say most of the quotes attributed to her. If you insist on posting inspirational quotes, at least do your research.

There are a number of suitable outlets for your inspirational quotes. Facebook and Twitter are built for your constructive locution. They yearn for it. Give them what they want.

(Inspagrams taken from the Notes app are doubly awful.) 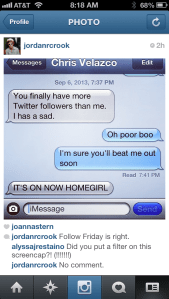 This brings me to the second worst type of screenshot on Instagram: your text message conversation.

Once in a blue moon, a text screencap is worthy of your Instagram feed. For example, autocorrect nightmares are hilarious to just about everyone.

Still, in most cases your text message conversations can only appeal (or make sense) to a small group of people. I follow a wide range of people on Instagram, from close friends to professional acquaintances. The vast majority of those people, however, are not people I speak to on a regular basis.

That’s the magic, isn’t it? Checking in on the wedding of a high school friend or seeing a fellow tech reporter’s vacation in Miami is delightful.

But just because you have funny text conversations with your mom, or your best friend, it doesn’t mean that we’ll get it (or that we care). These are what we call “inside jokes” and they aren’t so funny unless you’re on the inside. Don’t leave people out, Instagrammers. It’s rude. 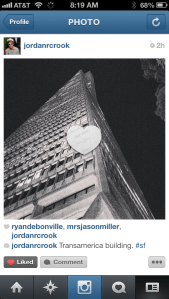 I know what you’re going to say: why do I care if people like my photos?

There isn’t a fair answer, other than it feels good. Like count is a measure of the audience’s feelings toward a certain photo. If photos of my new gadgets get an average of two dozen likes, while pictures of my food get two or three likes, I soon learn that my audience is more engaged with photos of gadgets. More gadgets, then, I post. Less food. You see where I’m going.

By commenting that my picture of a kitten is cute, but not liking it, you’re throwing off my mental gauge of what to post in the future.

It’s also selfish to be posting photos yourself, with the expectation of getting likes, and yet never handing them out to others. We’re all on Instagram to communicate through photography, and your likes are a major part of that communication. If you want to be in the game, play along.

The stingy liker makes little sense. There’s no record of what you like on Instagram. Your likes don’t cost you anything besides a little extra effort from your thumb. Why, then, do some people comment on photos without liking them?

I have a friend, who will remain nameless. This friend (let’s call her Betty) posts at least five photos from every single activity she’s involved in. She goes to a bar with friends, and boom, six new Instagrams. She goes to a concert? Expect to see at least nine photos of the band, the crowd, and herself.

I love my friend Betty, and I love peering into her world in real-time to see what she’s up to. But the Instagramaholic is like that person who tends to repeat themselves. They say something once, you get it, and then they say it in a slightly different way eight more times.

Those collage apps like PicStitch are built explicitly for this. 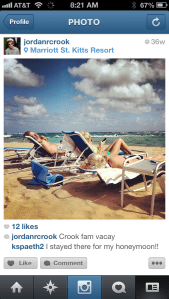 The opposite of the Instagramaholic is the World Traveler, that one guy that only pops up in your feed when he is doing something outrageously awesome, like driving a motorcycle in Paris or surfing in Bali. Months go by, and nary a photo from the World Traveler until suddenly, ten photos of Rome’s greatest treasures appear.

Obviously, we’re all more disposed to sharing our lives and photos when we’re doing interesting things. There are a list of mundane objects that every Instagrammer has taken: their feet in the sand, the plane window, an unusually beautiful latte. This can be annoying, but it can also be quite pleasant.

This is why Instagram is real-time to begin with. The next photo in your feed might be yet another plate of food, but it’s also a quick glance into what your friend is doing at that very moment, eating a delicious meal. I’d rather have a window into your real life, vacations and the everyday, than just few photos from your trip to Antigua.

I’m not saying to post boring things all the time, but posting pictures of only the most amazing tidbits of your life makes you seem like a show-off. A healthy Instagram feed is a mix of all things you, not just the glamorous stuff. 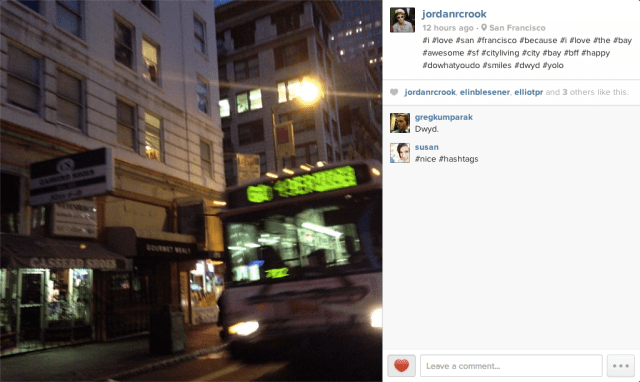 The Hash-Hole could be the worst person on Instagram. Their flagrant substitution of quality for quantity is offensive. There should never be a hashtag in front of the word #the. Still, there are 16 million photos tagged with #the. Why? Seriously, an explanation for this would surely entertain.

#Not #only #does #this #make #your #caption #unreadable, #but #it #makes #you #look #incredibly #desperate #for #Instagram #love. There are clever ways to implement hashtags in your captions, and they can still get you likes or new followers.

And beyond popularity, hashtags have more intimate uses (which, in my opinion, are far more fun). Choosing a random, insidery hashtag for a certain event or group of friends can create a single location for all of your photos to live forever. I’d much prefer inside joke hashtags than far too many hashtags.