Fuse, a new mobile application that aggregates your social networking activity into one “fused” feed that you can then interact with, search, reply to and more, recently got an overhaul making it a more stable product — and one that’s now ready for the forthcoming iOS 7 operating system thanks to an upgraded look-and-feel.

The concept behind the app is simple: it brings all your social networks together under one unified interface. Currently, Fuse combines your accounts from Facebook, Twitter, Instagram and LinkedIn, with plans to offer support for Pinterest, Google+, Foursquare and other networks in the future. 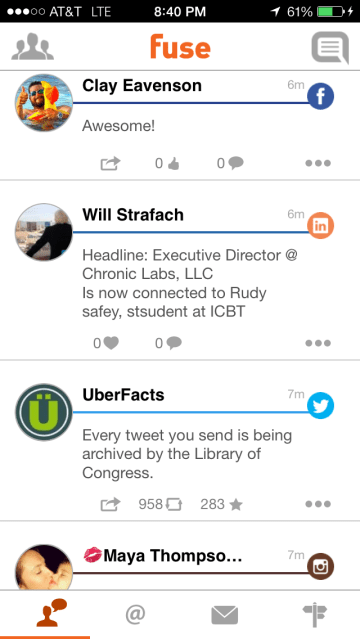 Like most social apps, Fuse presents your updates in a stream-like format, allowing you to like/favorite, share, re-tweet/re-post, reply, and more. Plus, it lets you write posts and then share to all your networks at once — the way Ping.fm once did back in the earlier Web 2.0 days. You can also create and save searches that find your keywords and search terms across all your networks.

There are other apps that let you combine your social accounts — Divvy, for instance, focuses on photos, and newly launched Socialblend looks promising, as well. However, other would-be competitors have since abandoned this space, including TweetDeck, which earlier this year pulled its Facebook integration and mobile apps, while Streamified more recently announced they’ll be joining Airbnb and shutting down.

Fuse hopes to stick around a little longer by having a business model in place from day one, it seems. Twitter and Facebook support are offered for free in the app, but Instagram and LinkedIn are 99 cents via in-app purchase. Presumably, as other services are added, they too would be paid upgrades. 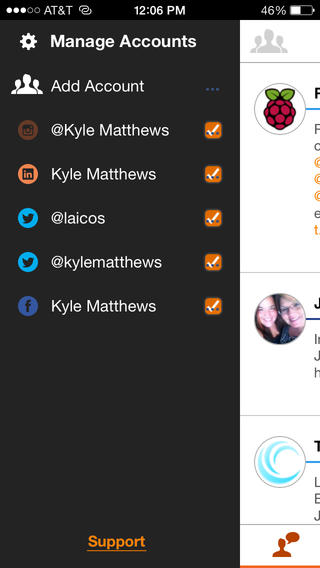 Fuse’s co-founder Kyle Matthews is best known as the co-founder of ModMy LLC – the company behind ModMyi.com, the largest iPhone customization community on the web, with some 850,000 members and 1 million daily pageviews. He explains that the new app was built out of a personal need. Managing your social presence is taking more and more time, says Matthews, as an increasing number of apps vie for your attention. “I got tired every morning of opening four different apps to check my social presences. Our tagline is ‘You’re one social person. Get one social app,'” he says.

Matthews teamed up with co-founder Ryan Negri, CEO of e-commerce site Negri Electronics, to create Laicos, the mobile development studio behind Fuse. The two have extensive experience in the mobile space – Negri with the wireless industry and bootstrapping companies, and Matthews with app building, consulting, and more, including ModMy’s other expansions to medical apps via ModMedical, and auto customizations with Brooks Motorsport, among other things.

The Fuse app quietly launched in late June, and received the overhaul just a week ago. Fuse is fully self-funded and lives here in the iTunes App Store.