A company called Canva is today launching what it hopes will become the default tool people use to create and collaborate on design online. The service, which offers an easy to use drag-and-drop interface and access to over a million photographs, graphics and fonts, is aimed at the mainstream user who doesn’t consider him or herself a designer, as well as professionals who want to collaborate with clients around their work.

The company’s technology has been in development for a year, and the startup has already raised $3 million in seed funding from Matrix Partners, InterWest Partners, 500 Startups, and various angels. 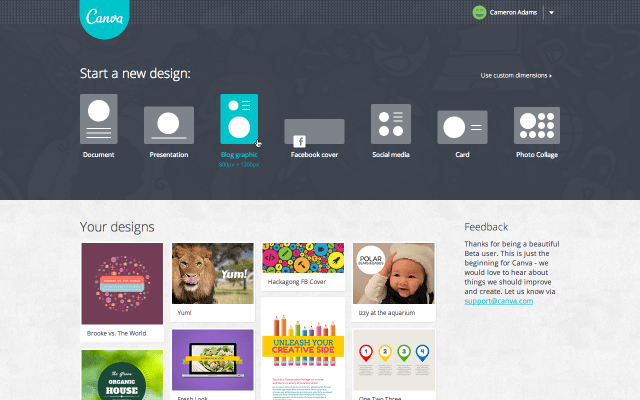 The idea for Canva spun out of CEO Melanie Perkins‘ previous business, Fusion Books, an online publishing system for creating school yearbooks launched in 2007, offering a similar interface. Explains Perkins, “we always knew that the technology we developed was much more powerful than just the yearbook market,” she says, adding that she’s always thought it was crazy how much design today was still being done on the desktop.

However, Canva isn’t meant to replace pro tools like Photoshop or InDesign, for example. “We draw a line in the sand, and we don’t do things like logo design or things that require a lot of fine-tuned pixel manipulation,” says Perkins. “But what designers can do is upload that content, and then do the layout design in Canva.”

Besides, for the majority of users who just want to create a flyer, slideshow, invitation, poster, or just want to make an image to use in a blog post (ahem), Canva meets their needs. Like Google Docs (now Google Drive) was a “good enough” replacement for Microsoft Office with a simpler interface and less overwhelming feature set, Canva is aiming to be the tool that’s “good enough” for most everyday design-related tasks, too.

But to become the tool that makes design accessible to the masses, Canva has to help people get over their fear of design – something it does through a fast 23-second “how to” guide upon first launch. It also offers a user interface that’s simple to understand, and a price point which is not prohibitive.

In fact, Canva is completely free to use. Instead, the company plans to generate revenue through the paid images it sells on its platform, which are offered alongside the free selection. To fill its catalog, Canva has employed some designers to build the basic components in-house, but also reached out to professional photographers, designers, and illustrators, asking them to contribute their own portfolios to the service directly.

Perkins explains that the photographers and artists see the potential in reaching a new market with Canva, and that has to do with the unique pricing model it has put in place. 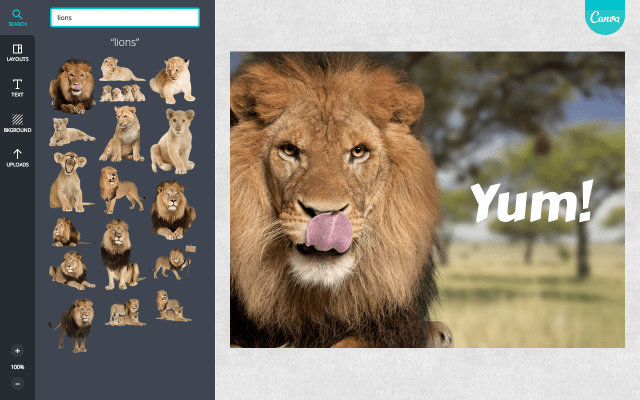 “We’ve introduced a new licensing type which is a one-time license,” she tells us. Usually, on stock photography sites, you pay much higher fees to download an image, but you can then use that image as often as you’d like. “But because we’re integrating an online design system and stock photography, we’re able to bring the price down to one dollar…It’s so much more accessible if you’re trying to create a school assignment, or a marketing brochure – in any application, it sort of becomes a no-brainer,” Perkins says.

As for the platform itself, it’s as easy to use, as described. On the left side of the screen, you have a search box where you can type in keywords to find specific images, or you can browse through the categories, like lines, banners, shapes, frames, animals, food, travel, technology, and more and just begin dragging and dropping things onto the blank canvas to the right.

Other options let you quickly add backgrounds, choose from pre-made layouts, add text or even your own uploaded work. And there are number of little things that Canva does that make it easy on end users who aren’t design savvy. For instance, it automatically proportionally resizes images when they’re dropped into place, and it prevents you from accidentally stretching images out of proportion. Also, text dynamically resizes as you type and it automatically changes from black to white as you experiment with swapping out different backgrounds. It helps you figure out where the center or the margins of the page are, by showing grid lines as you move things around, and so on. 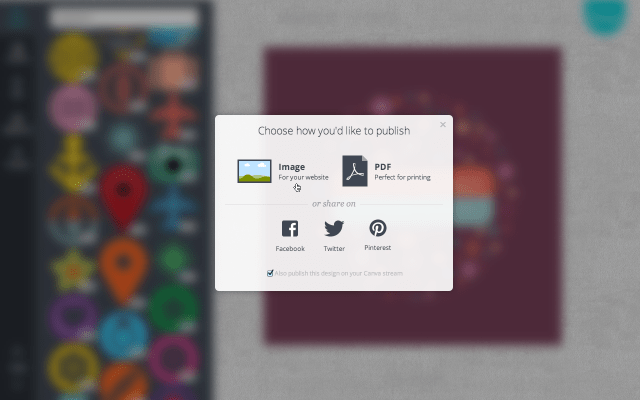 And if you need to collaborate, you can click a button to get a link you can share directly however you choose, or you can invite the others via email.

Though the process of design is arguably easier in Canva than in a complex, feature-rich program like Photoshop, there’s still something to be said for having a designer’s eye. (Translation: I could still build some horribly gaudy things using Canva.) Longer-term, the company hopes to address this problem with a marketplace where more finished works could be resold to end users, who could then customize the individual elements, like the text.

However, Canva is ones of those tools that’s easier to just try, than have its every detail explained. Today, with its public beta release, that’s now possible. The company is sending out invitations to those who had previously signed up for access, and is allowing newcomers to register their username here for a staged rollout beginning now.

Based in Sydney, Canva is currently a team of twelve full-time, including Perkins and COO Cliff Obrecht.