The launch of BBM for iOS and Android appears to be imminent, as BlackBerry has accidentally published user guides for its forthcoming mobile messaging apps to its own website: here (iOS) and here (Android). The guides explain in detail how the apps function, how to get started, and their various feature sets.

For previous BBM users from BlackBerry, most of these details are familiar. The apps are designed to allow for real-time communication between contacts and groups, the guides explain, letting users share pictures and messages, including broadcast messages, multi-person chats, and group chats. Users will also be able to create BBM Groups, where they can plan events, track to-do’s, share photos, and chat with up to 30 people at a time, without the need to add everyone as BBM contacts.

BBM will work over both cellular and Wi-Fi, the latter option which is meant to help avoid data charges when traveling.

Each user can establish their own BBM profile, where they can choose a display picture, name, and status that their contacts will see, and they’ll also have a unique BBM PIN which they can access by tapping “Show Barcode.” 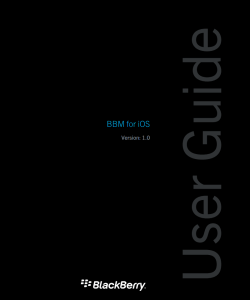 The apps will also include support for various emoticons and emoji, but because the guides don’t include screenshots, we’re not able to see a preview of what these or any of the features look like in more detail.

We already knew BBM was to arrive on iOS or Android globally this summer, as CEO Thorsten Heins announced the news at the BlackBerry Live conference in May. The company also began sending out beta invites earlier this month.

This is a major move for the struggling company, as BBM has for a long time been one of Blackberry, and the BB10’s, strongest features. At launch, Heins had said that only messaging and group features will be available, but promised that the rest of BBM will eventually make its way to the Android and iOS versions including screen sharing, BBM voice, and the newer BBM channels.

The question now for the company is whether it’s too little, too late. Today’s app stores have become saturated with a plethora of mobile messaging apps for users to choose from, including Skype, Whatsapp, KakaoTalk, Kik, Viber, WeChat, LINE, Facebook Messenger, Tango, Snapchat, MessageMe, Path, Voxer, Google Hangouts, and many others. Blackberry is banking on its brand recognition and history in the messaging space, but the large majority of its users have since moved on new smartphones and therefore, new mobile applications. Still, BBM may still hold a soft spot in some of these folks’ hearts, and at least some may be willing to give the apps another shot.

Alt links, in case Blackberry takes the guides down, are below. Although that’s probably not the case, as this “leak” could very well be a beg for publicity ahead of the apps’ official debut. (And it worked, sigh). Besides, who needs a manual for mobile messagers, anyway?